A Rose Between Thorns 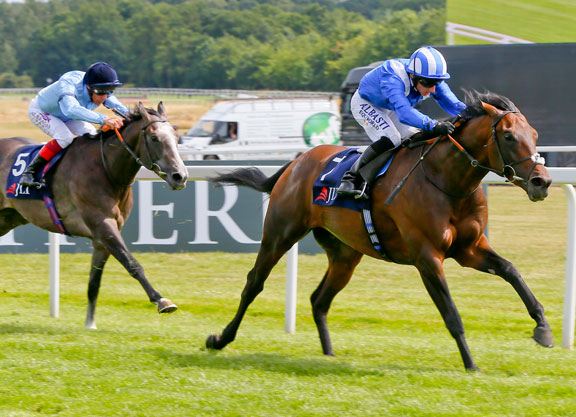 So impressive when scoring by eight lengths on his 3-year-old bow over a mile at Newbury Apr. 18 that he was supplemented for the

G1 2000 Guineas, the bay failed to back up his maiden performance and was 15th in that May 2 Newmarket Classic, but bounced back off a break to win the Listed Steventon S. over 10 furlongs returning to Newbury July 18. On that performance, in which the G1 St James's Palace S. third Consort (Ire) (Lope de Vega {Ire}) was 2 1/2 lengths back in second and the re-opposing Fire Fighting (Ire) (Soldier of Fortune {Ire}) was a further seven lengths behind in third, Intilaaq is poised to emulate the past Shadwell luminary Nayef in winning this prize en route to better things.

“Intilaaq is in great form. He has trained nicely since winning at Newbury and this race looks a good stepping stone for him before tackling bigger targets in the autumn,” trainer Roger Varian said.

Of the quartet of older horses in opposition, Links Partnership and Cheveley Park Stud's Master Carpenter (Ire) (Mastercraftsman {Ire}) comes here on the back of a return to form when taking York's John Smith's Cup heritage handicap, where Fire Fighting was fifth, over an extended 10-furlong trip July 11.