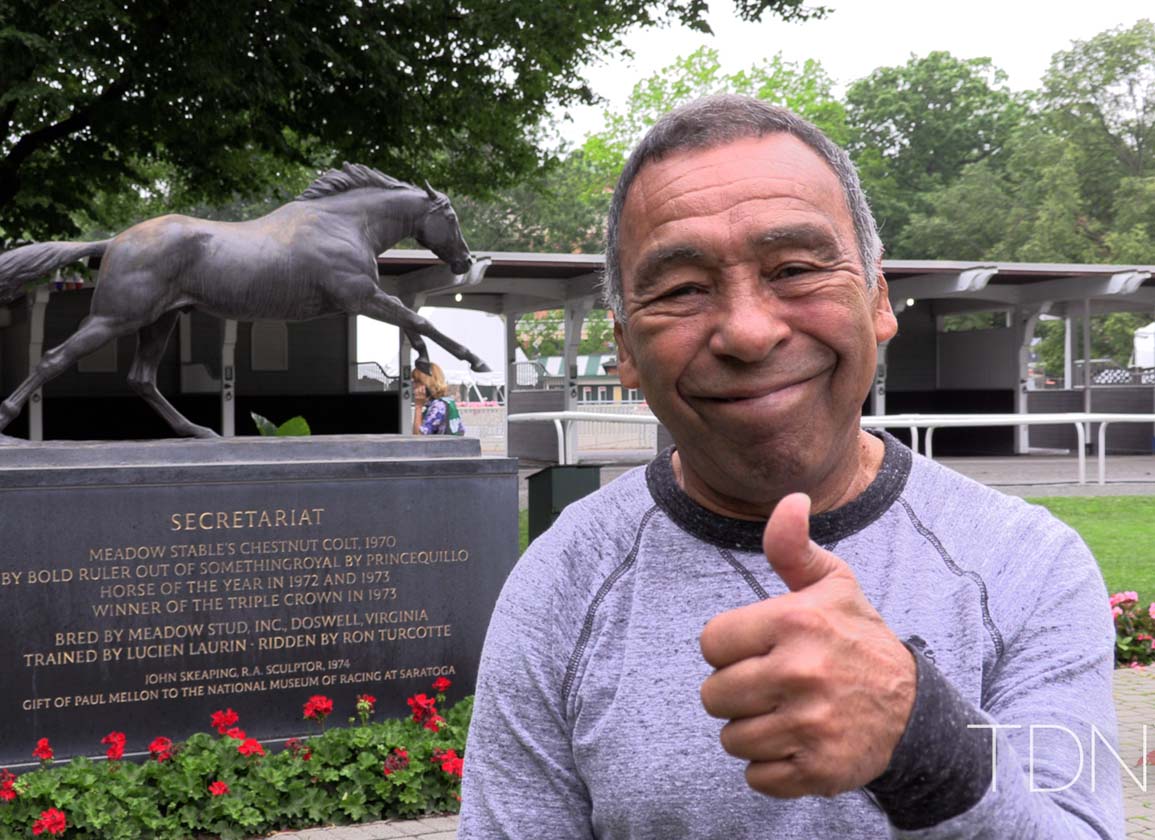 Angel Cordero Jr. gives the 'thumbs up' to supporting the upcoming NYRTC Champions Talk on July 19.

In less than five weeks, the King of Saratoga will head north to return to his kingdom in Upstate New York. But for now, Hall of Famer Angel Cordero, Jr. is busy at Belmont Park as the jockey agent for up-and-coming young rider Manny Franco.

These days, it's not easy to make it to the top of the jockey ranks in New York, according to Cordero.

“Fortunately, we have something happening here that didn't happen for a long time anywhere,” he said. “We have the top nine or 10 riders and they're all riding together. We haven't seen competition that hard since Santa Anita when they had [Bill] Shoemaker, Laffit [Pincay, Jr.], [Eddie] Delahoussaye and [Chris] McCarron all together. Now it's tough. You've got 10 top riders here that no matter where they go, they could be leading rider.”

Cordero has enjoyed watching, and in many cases mentoring, many of the jockeys who are at the top of today's standings.

“They have all come a long way to reach the top,” he said. “I remember when Johnny [Velazquez] was a little kid and came here to the United States and worked his way to becoming the champion he is now. I remember the Ortiz brothers when they first got to this country. They used to come to the house and watch film and ride the Equicizer. I remember when Manny Franco came in and he was a kid. Now I'm very fortunate to be working with him.”

Sometimes, he says, seeing these talented athletes in action makes him a bit melancholy as he reminisces on his career that included 14 riding titles at Saratoga and three wins in the GI Kentucky Derby.

“I wish I was riding now because that's what makes an athlete a little better. When you compete with somebody that is good, then you know you're really in for a fight. The friendships with the jockeys is outside [of the racetrack.] When the gate opens, nobody is friends. When you don't win a race, ten minutes later- maybe not right after, but ten minutes later- everything is back to normal.”

One of Cordero's favorite racing memories involving a fellow Hall of Fame jockey is when he traveled to California to ride for D. Wayne Lukas and was coupled in an entry with Laffit Pincay Jr. After the races that evening, Pincay offered to drive Cordero back to the airport.

“We got out of the car at the airport and we hugged each other and he said, 'Good luck, Campeon,'” Cordero recalled.

The then-newcomer was riding high as he made he way through the airport after being referred to as a champion by the well-respected rider.

“That hit me really hard,” Cordero said. “I was sitting in first class thinking that I was the president of the United States.”

When he landed back on the East Coat and his wife was there to greet him, Cordero insisted that he now be referred to as 'Campeon.'

When Cordero returned to California a few weeks later, he heard a child along the paddock ask Pincay for an autograph.

“I'll give it to you later, Campeon,” Pincay responded.

“When I came home, my wife asked how I did,” Cordero said. “I told her I won, but I'm sad because I'm not a Campeon anymore. Laffit calls everybody a Campeon. I thought it was a privilege for me, but it wasn't.”

While he's been retired from riding for well over two decades, Cordero has retained his role as an important ambassador in racing and one of the sport's biggest cheerleaders.

“Right now what we need is to stay together and rebuild our game,” he said. “This is the best sport and there are a lot of people involved in it from grooms to hot walkers and assistant trainers. We need to get together and try to make our sport the best. We are all going to have problems and that's a part of life, but I think as a group we can always get together and do the right thing for the sport.”

Angel Cordero Jr., along with Chris McCarron, Richard Migliorie, Laffit Pincay Jr. and Jorge Velazquez, will be featured at the 2021 Champions Talk fundraiser for the New York Race Track Chaplaincy in the Fasig-Tipton sales pavilion in Saratoga Springs on July 19.