A New Heir to War Front's Throne at Claiborne 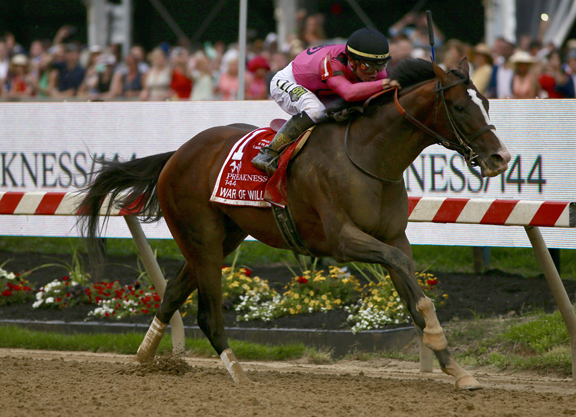 Dual-surface Grade I winner War of Will joins his sire War Front at Claiborne Farm. | Horsephotos

War Front is undoubtedly heralded as one of America's top turf sires, but Claiborne's Bernie Sams said he finds any stereotype that the stallion is solely a grass producer is unjustifiable.

“I think War Front has been labeled to some extent as a turf sire, but unfairly so because he got his start with dirt stakes winners,” he said. “Then a lot of people started breeding to him and taking a lot of them to Europe. He probably is equally as good on dirt as he is on turf, if we had as many of them here.”

The imposing bay recently joined his sire at Claiborne Farm and will stand for a fee of $25,000 in his first year at stud.

A $175,000 R.N.A at the Keeneland September Sale, War of Will was pinhooked privately by Norman Williamson before selling for €250,000 at the Arquana May Breeze-Up Sale in 2018. The youngster was purchase by Justin Casse and sent to his brother Mark Casse's barn, where he made his debut on the grass.

While competitive in stakes company at two, the colt failed to break his maiden in four starts and Casse decided to look past the colt's grass pedigree, switching the blaze-faced bay to the dirt.

The result was a three-race win streak, with a five-length maiden-breaking sophomore debut, followed by a graded stakes double in the GIII LeComte S. and the GII Risen Star S.

“We started getting interested in War of Will when he won down at Fair Grounds,” Sams said. “He was very impressive. We'd kind of been keeping an eye out for a son of War Front, and he seemed to fit the bill.”

After drawing the first position in last year's GI Kentucky Derby, rider Tyler Gaffalione had War of Will poised for a perfect 'up the rail' victory. But the seam never opened, and they ran seventh in a highly controversial Run for the Roses.

The duo sought redemption and earned it when two weeks later in the GI Preakness S., they again drew the one hole, but this time found an opening and never looked back. The victory gave all connections- owner Gary Barber, Casse and Gaffalione- each their first Preakness win and first-ever Classic win.

“After he won the Preakness was when we got very serious,” Bernie said of the then stallion prospect. “Just with the fact that he was a big, strong son of War Front that had won an American Classic on the dirt going two turns, and had speed.”

War of Will did not see the winner's circle again last year, so Casse followed a hunch and turned the bay back to the turf for his four-year-old season.

He was rewarded when War of Will took the GI Maker's Mark Mile S. at Keeneland, defeating Graded and Group I winners Raging Bull (FR) (Dark Angel {Ire}), Without Parole (GB) (Frankel {GB}) and Next Shares (Archarcharch).

“The Grade I at Keeneland on the grass was very exciting,” Sams said. “For him to be a Grade I winner on dirt and turf, there's a lot of grass racing in America now, so you know it can go both ways with him. And his female family has quite a bit of turf in it.”

War of Will is the ninth foal out of Visions of Clarity (Ire) {Sadler's Wells), a stakes winner at three in France and half-sister to European champion and Breeders' Cup Mile winner Spinning World (Nureyev). The mare is also responsible for Irish highweight and Group I winner Pathfork (Distorted Humor), as well as Juddmonte's three-time graded stakes winner Tacitus (Tapit).

Sams said Claiborne is looking forward to offering their first son of War Front, but that War of Will offers a new aspect to the sire line for breeders.

“To have had Danzig and War Front and now him is very exciting,” he said. “If he could be halfway as successful as those two, it'd be a good deal. There's definitely more size and scope to him than his father and grandfather. [In terms of] conformation, he sells himself. He's a big, pretty horse. He's correct and has plenty of bone.”

War of Will's appeal is so great, it seems, that he might just end up taking a few mare's off his sire's book.

“Everybody has loved him,” Sams said. “I've had a couple of people that had asked about breeding to War Front and came out and looked at War of Will and now are going to breed to him and not War Front. So that's the kind of mares he's going to end up getting.”