Home » Archive » Europe » A Morning With The British Racing School

A Morning With The British Racing School 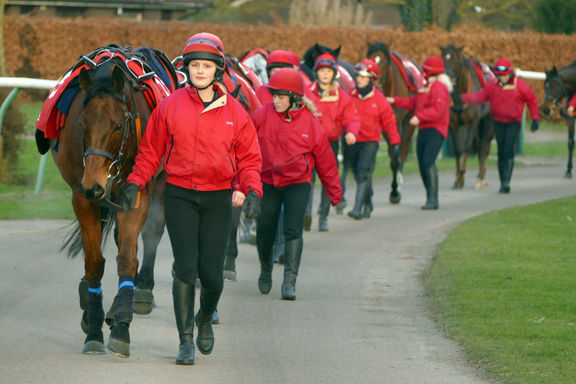 Inspiration hangs on the wall of the communal dining room in three framed photographs. Oisin Murphy, Tom Marquand and Josephine Gordon–the last three champion apprentices in Britain–all graduated from the British Racing School and their jockey portraits watch over the current batch of students as they file in for breakfast.

For many teenagers, breakfast might come mid-morning once they’ve rolled out of bed, but the apprentices at the school, aged between 16 and 18, have been up since 5:30 a.m., have mucked out the 84 horses on site and each ridden one lot before it’s time for bacon and eggs.

The average day for the youngsters might sound like bootcamp to some members of a generation that has perhaps been a little cosseted, but the programme for the apprenticeship course–which takes place over nine or 14 weeks depending on the level of the applicant’s experience–is necessarily intense in order to be able to provide a thorough grounding for a career in racing.

And it’s not just about learning to ride racehorses and mucking out, as Grant Harris, the school’s chief executive for the last three years, outlines.

“I’m not sure everyone really appreciates the other stuff that goes on here–all the afternoon and evening classes in the non-riding essential life skills,” he says. “We teach our students all of the important things that 16- to 18-years-olds need to learn to live independently. We run a cookery programme, classes on cyber awareness, diet and nutrition, finance, driver safety and awareness, and we introduce them to the work of Racing Welfare. It’s why it’s vital that all young people wanting to work in the industry come here.”

For the 48 students engaged on three separate courses running concurrently, the morning’s work is framed to closely resemble life in a racing stable. The horses at the British Racing School are predominantly retired racehorses on long-term loan from their owners and, just as at any stable, each comes with his or her own quirks and foibles.

There are some star names currently on the books, with dual Group 1-winning sprinter Kingsgate Native (Ire) (Mujadil), now 12, a recent signing along with Group 3 winner The Cheka (Ire) (Xaar {GB}), while Cheltenham Festival winner Our Vic (Ire) (Old Vic {GB}) remains a perennial favourite at the age of 19.

While plenty of the students arrive at the school having ridden ponies, or perhaps even having had a summer job at a racing yard, it’s not uncommon for some to sign up without ever having sat on a horse in their lives. Trainees can hail from a range of countries, including Italy, Germany, Holland, France and the Scandinavian nations.

“In 14 weeks we have to bring them up to a standard that is acceptable for them to start work in a racing yard,” says Harris. “Some find it’s simply not for them and we don’t under-estimate the confidence required to ride racehorses well. We’ve recently started a ground-based yard staff course to try to retain people who are struggling with the riding, but generally we’ve found that the people who apply to that course are older. We teach them everything: from how to put on a headcollar, how to drive a tractor, how to clip or to take a horse to the races.”

For those that remain on the core apprenticeship, they will ride two or three lots per day, either in the indoor school, or on the school’s straight or round gallops set on its 150 acres next to Godolphin’s Newmarket headquarters. The riders all carry radio sets so they can respond to instructors alongside them on the gallop in a vehicle. Advice on pace and position are given constantly by words of encouragement from walkie-talkie to earpiece.

After a morning of riding and yard work, it’s into the classroom and the gym after lunch.

“From 2 p.m. they have lessons to prepare them for their Level 1 Apprenticeship Diploma,” Harris explains. “Some will have to do functional skills in the afternoon–if they don’t have a maths or English qualification, the government demands that we teach both. They head back out to evening stables at 3:30 p.m. and from 6 p.m. it’s either fitness, which is hugely important and we really emphasise that, or a whole host of evening classes.”

With lights out at 9:30 p.m. after mandatory room cleaning, and no wifi as a distraction, the near-military discipline of the boarding school may put some off but seemingly not those currently engaged on the 14-week course who worked right through Christmas, including Christmas Day.

“We only have two weeks left and I don’t want it to end,” says one girl after completing her first ride of the day up the straight gallop in subzero conditions. “I love it here,” adds her friend as they rush off for breakfast.

However much the school simulates life in a racing yard, their first job will doubtless be daunting, though these days not so hard to come by, with Britain suffering from a shortage of staff in racing yards. The situation, which was exacerbated by a ban on non-EU workers several years ago, could worsen still post-Brexit.

“We don’t have any difficulty placing most of our students,” Harris admits. “In a way they are the golden generation. When my predecessor Rory MacDonald was doing this job he was cold-calling trainers and asking them to take the graduates but now we have lists of trainers on our books very keen to take someone.”

Harris adds, “We are paid by the industry through Levy Board funding to produce 142 trainees a year. Last year we put 180 into the industry. We put on extra courses because we know there is a shortage and we have the capacity to do it. We’re trying to stretch our resources but hopefully training will be high on the agenda when the BHA discusses how to spend the extra funds generated by the new Levy replacement deal.”

While the school is essentially a charity, it also has a separate corporate wing to enhance revenue, and it is currently playing host the annual week-long The Racing Industry Course (TRIC) with guest speakers from all walks of racing life. Its proximity to the Newmarket heartland, which is home to so many trainers and jockeys, is a major boon, and famous names such as Ryan Moore and Kieren Fallon are just some of those to have been involved in coaching sessions and presentations to the students.

A number of jockeys and former students will soon have the chance to return more frequently to the site, with the Injured Jockeys Fund planning the building of Peter O’Sullevan House in the school grounds. The facility is effectively the third in the series, following Jack Berry House in Malton and Oaksey House in Lambourn and, like its predecessors, will be a state-of-the-art fitness and rehabilitation centre.

Harris says, “We are exceedingly lucky being where we are. We are on the outskirts of Newmarket, with all our own self-contained facilities, but we have 80 trainers on our doorstep. If we have students who want to stay in Newmarket we are able to send them out to do evening stables and the trainers help us hugely in that matter, helping that transition from school to work.”

He continues, “We think long and hard about where we place people and do a lot of liaison with the trainers regarding their responsibilities to these young people. For us it’s not just about recruitment and training, but also retention of staff in the industry.”