A Mighty Day for Woodbine Fans 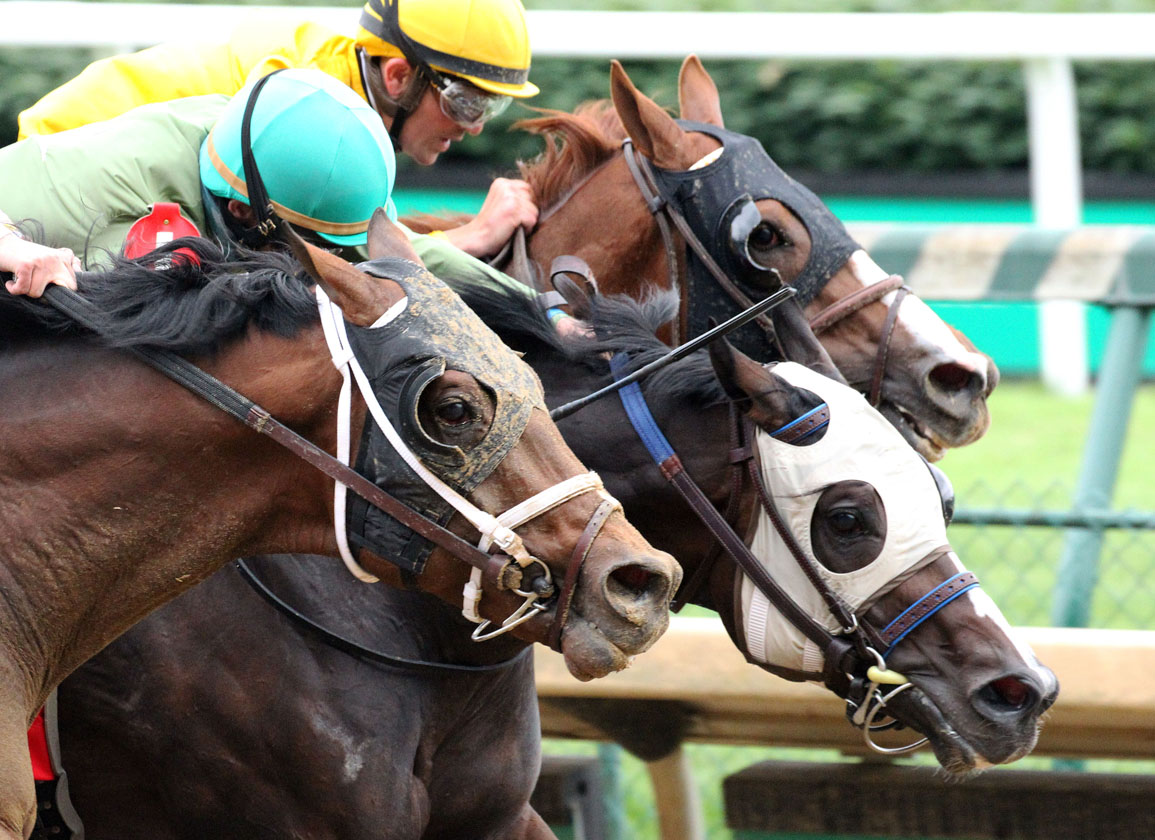 Mighty Heart got his nose down first in Churchill's Blame S. | Coady

What a singular coincidence, and literally so, that two of the best horses recently bred in Canada–and that has never been a negligible distinction–should both have only one eye. True, the origins of Hard Not to Love (Hard Spun) and Mighty Heart (Dramedy) could scarcely be more diverse. The 2019 GI La Brea S. winner, who was retired a few weeks ago, graduated from one of the most admired breeding programs in North America, which routinely sends yearlings to Keeneland as coveted as any making a shorter trip from the storied Bluegrass farms. Much like the pioneering E.P. Taylor, indeed, Anderson Farms rebukes any condescending misapprehensions about raising top-class Thoroughbreds in “ice and tundra”. The way Mighty Heart has defied their shared adversity, in contrast, confounds the odds in a fashion–out of the only mare then in his breeder's ownership, by a sire since exported from Oklahoma to Saudi Arabia, and named for the eyedropper-fed runt of a Sphnyx cat litter–that nourishes hope for smaller operations everywhere, from Ontario to Ocala.

After a promising spring south of the border, Canada's Horse of the Year resumes his domestic career Thursday in the most auspicious of contexts. He not only lines up for the GIII Dominion Day S., but does so on a Canada Day when fans are finally restored to the Woodbine stands after a second lockdown trauma that brought the local racing community to its knees. Mighty Heart's return to the scene of his runaway success in the Queen's Plate last September, then, serves as the perfect tonic. Even before the pandemic, after all, the Ontario industry had been through years of crisis following the abrupt loss of slots. For all those who have been striving to rally investment, and all those who have resisted fresh despair during the past year, the big heart of this one-eyed wonder has become an inspiration.

“I find it so funny that he got the name he did, before all this,” says his trainer Josie Carroll. “Because it just sums up this horse. Like in his last race, at the head of the lane, I thought: 'Okay, he's going to run a good race.' But he just dug in. He's just a scrappy little horse.”

That was in the Blame S. at Churchill last month, where Mighty Heart refused to be denied in a three-way photo finish. Having previously made a promising return at Keeneland, he has laid a solid foundation for his second campaign after exploding onto the scene last year, winning the first two legs of the Canadian Triple Crown. Carroll had always planned to get him rolling again in the U.S., but his peregrinations from Florida to Kentucky obtained a melancholy background as the news from the home front became ever more frustrating.

Woodbine finally reopened for business on June 12, albeit behind closed doors, with a jackpot carryover that had been gathering dust ever since Nov. 22. That was when the meet came to a premature end, despite an exemplary record of functioning within COVID protocols in 2020, while a resumption scheduled for Apr. 17 had then been thwarted by government orders that permitted training but not racing. The ensuing limbo became an excruciating new test for the demoralised backside community and its patrons. 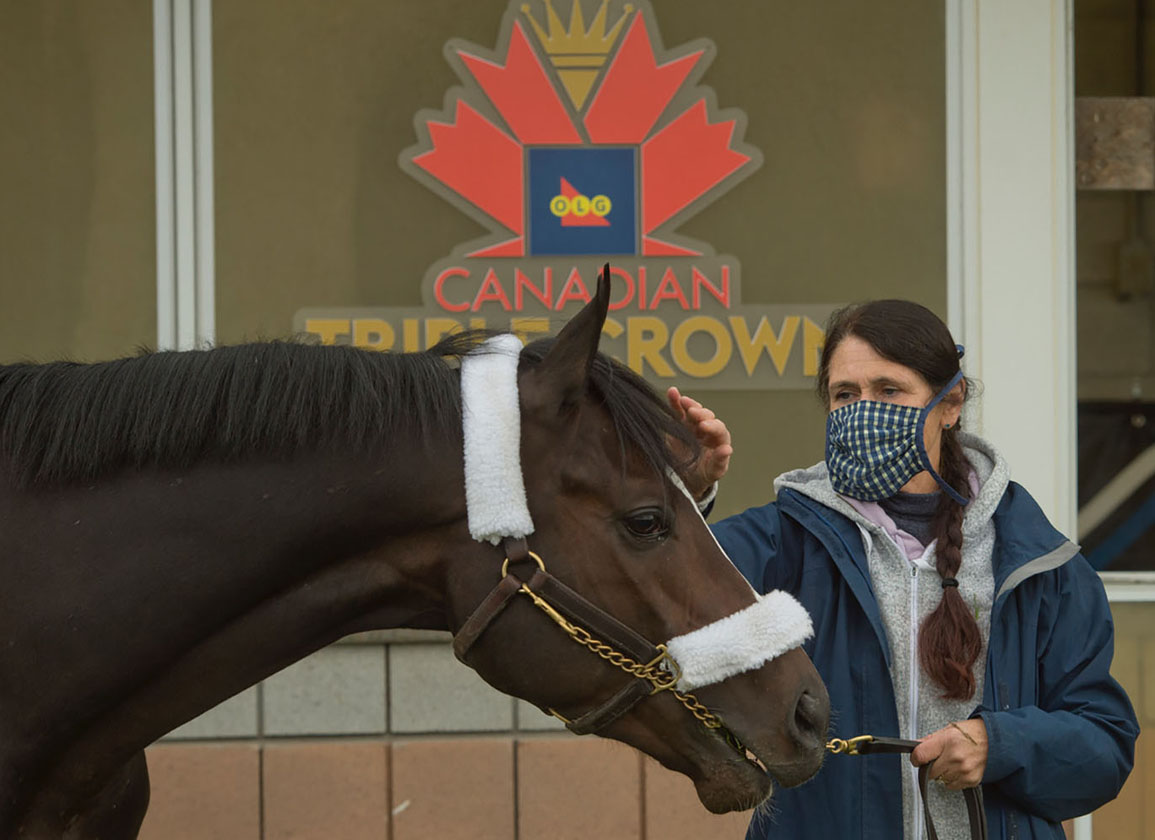 “You know, I have such a great appreciation for our owners,” says Carroll. “They stuck it out. They had the opportunity to race elsewhere, every other major track was open, but they left their horses here to race. We're all very appreciative, and it makes me so happy to see them coming back to the races, and back to the backside. Some of them haven't even seen their horses for a year and a half, yet they've been hanging in there.”

As Carroll acknowledges, that can represent the entire span of a horse's evolution into a measurable talent. There will certainly have been many a Woodbine project that has run its course in the meantime. And the excitement for many owners, as such, will often be the journey sooner than the destination. “For the majority of owners, half the fun is in the participation,” Carroll confirms. “That's what makes the relationship between the people and the horses.”

But it's a parallel relationship that has been under no less painful strain: the one connecting the morning toil of backstretch workers with the fulfilment available in the afternoons.

“It's been very hard for them, to keep their spirits up,” Carroll says. “Because the fun part, when you have put all that work into your horse, is going over there and seeing them run a big race. That's when you see the excitement on all your people's faces. So just to sit for months and months, without getting the opportunity to run, was very tough on them. And we all know that your basic pay rate, for backside help, is not that strong. They supplement their income with their percentages, from the horses' earnings, so it's a dent in their income too.” 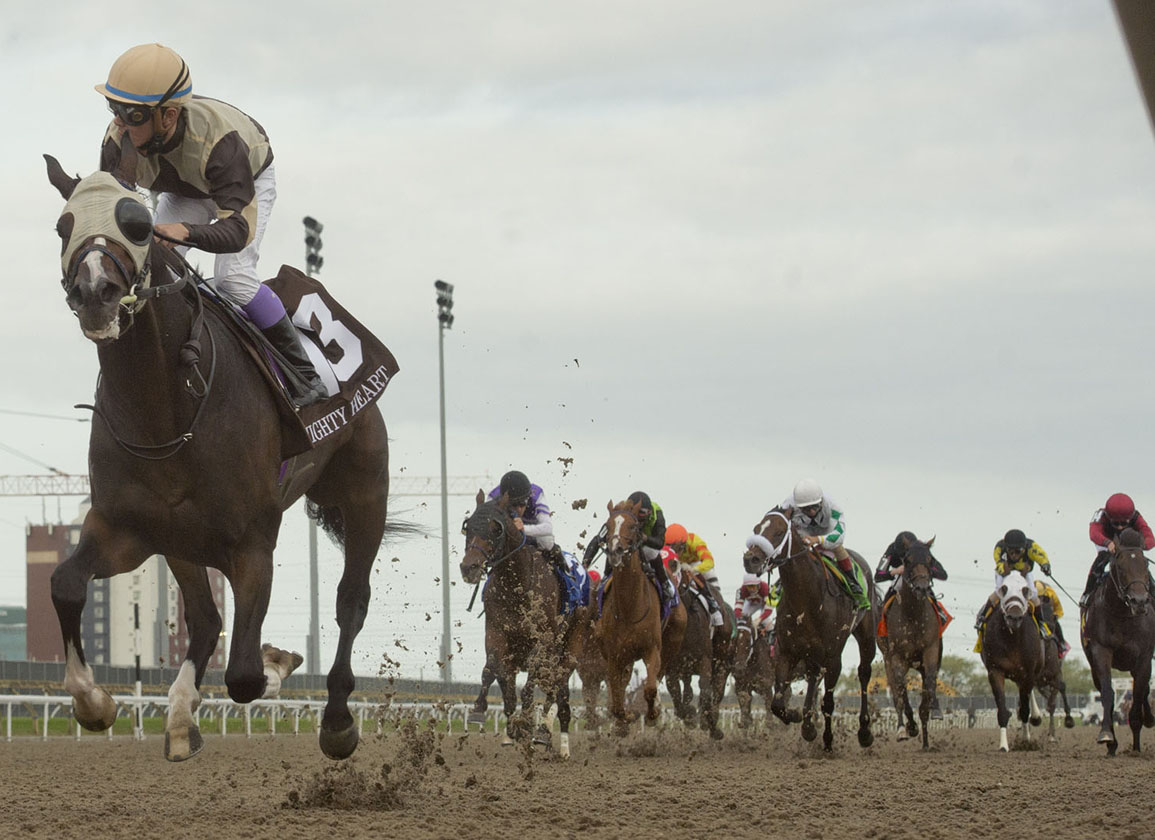 Fortunately times of trial will draw the best out in people, too, and fortify a sense of community. “I tell you, everybody in this industry has been great,” Carroll says. “I think we were all shocked when we got shut down at the end of November. Everybody had done such a great job, I think we had two cases out of the thousands of people back here. The same people that were working with these horses in the mornings were also handling them in the afternoons, so it didn't really make a lot of sense. It just felt like we got grouped with a whole lot of other sports and activities, without being looked at individually.

“Since then, everybody has worked so hard together. To get everyone on the backside vaccinated, for instance, so that when we presented to the government we could show them that the majority of people had had their shots. Woodbine did pop-up clinics, for people who live here and don't have a lot of access to transport, so that when Ontario began to open it would have been very hard to deny us, when we could show such a rate of coverage.”

For trainers, of course, the uncertainty created a particular challenge: how do you train up to a target, if the target keeps moving? After all, judging that fever pitch for race day is perhaps the key to their whole profession. But Carroll showed just why she was inducted into the Canadian Hall of Fame in 2019 when priming Boardroom (Commissioner) to win the first graded stakes of the Woodbine calendar, the GIII Whimsical S., after a seven-month absence.

“It's been a very challenging year for all the Woodbine trainers,” she says. “Every other jurisdiction was open. We were aiming for an April start, and getting horses ready for that. But it's very difficult when you haven't got an exact date, and things keep moving, and you're trying to keep horses ready to peak: you don't want to go over the top but you don't want to back off them too much, either.”

Mighty Heart himself was always going to have to regroup, regardless, having disappointed behind barnmate Belichick (Lemon Drop Kid) in the final leg of the Triple Crown before running fourth in the GIII Ontario Derby. Belichick, second that day, will again be in opposition Thursday after an excellent comeback run of his own when beaten a nose in a Churchill allowance. 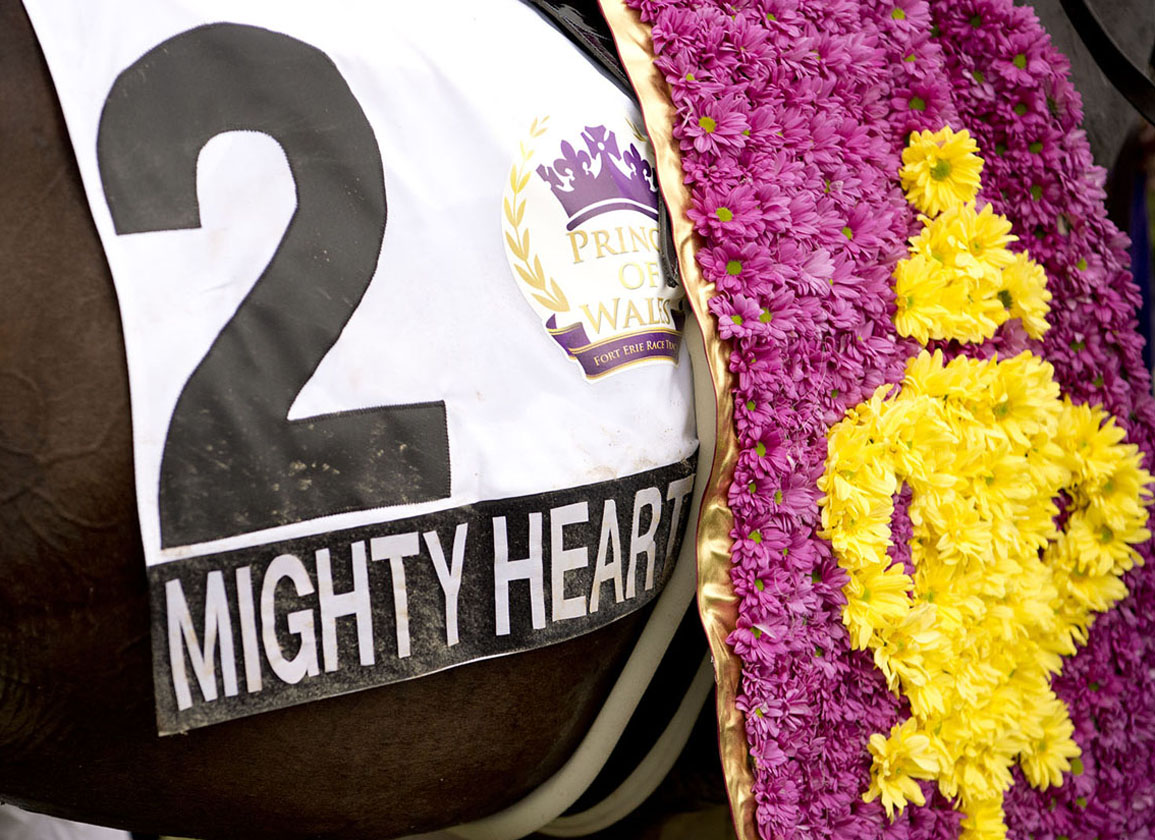 “Mighty Heart is not a big horse but he's well put together, very athletic-looking, and he's definitely rounded out into a much more mature shape than he had last year,” Carroll reports. “Mentally, he's always been pretty uncomplicated–for a one-eyed horse! He's got a few little quirks, but if you can deal with those, he will just soldier on.

“I had always intended one start before we got up here, and initially we were going to do that at Gulfstream. But a race didn't come up when he was ready, so we had our one start at Keeneland. The intention then was to come home but when things got delayed, and he was doing so well down there, I just said that now is not the time to backtrack.

“Belichick I sent back down to Kentucky when racing didn't reopen, and he ran a nice race. We're looking at the Niagara S. on the grass [July 25] but he's been 50 days without a run, he needs a race and he's good enough to run in this one.”

Even at 25% of capacity, the return of fans on such a resonant occasion will represent another psychological breakthrough as Woodbine horsefolk seek to put a nightmare year behind them. “We've gotten so used to it being quiet over there!” Carroll says. “But yes, the energy of the fans is part of what makes any sport.”

It feels only fitting, then, for this particular race, on this particular day, to be dignified by the participation–besides three runners trained by another great ambassador for Woodbine, Mark Casse, who this summer receives his postponed induction to the Hall of Fame in Saratoga–of a horse who so captured the hearts of the Canadian horseracing public. Nobody could have predicted what lay ahead after Mighty Heart lost his left eye in a paddock accident when just two weeks old. Carrying the silks of breeder Larry Cordes, he won the Queen's Plate by 7 1/2 lengths in the second-fastest time since the race arrived at the new Woodbine racetrack–the opening of which in 1956 was, of course, one of the many benedictions to the Canadian sport owed to the drive of E.P. Taylor–before following up in the Prince of Wales S. on dirt at Fort Erie.

With so many skilled Canadian horsemen doing their utmost to build on Taylor's legacy, they could have no better model for the underdog spirit than Mighty Heart.

“Our breeding numbers are down but if you look at racing in North America, for the foal crop we have, a lot of very good horses come out of Canada,” Carroll says. “I just hope things pick up and our industry starts to grow, because we breed such nice horses here. I think that's what made me really proud, going down there with Mighty Heart as our Horse of the Year. He showed he could really do it on the North American stage, and I just hope that helped showcase Canadian racing, and the quality of the breeders we have.”