On Aftercare: A Life Well Lived 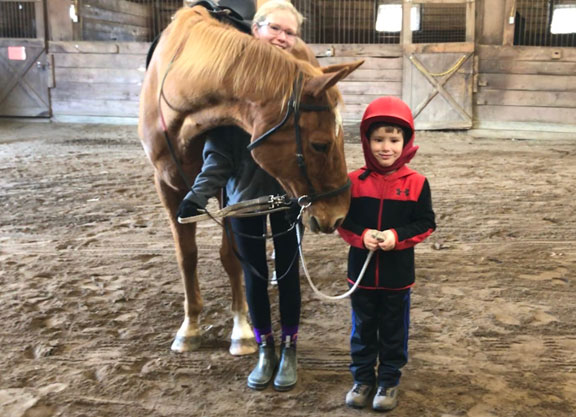 The first thing that you notice about Worldly Slew, now known as Sonny, is how his ears are always forward. He stands placidly as the therapeutic riding instructor, Cathy Lamando, the student, 6-year-old Nero, and a volunteer prepare for the riding lesson. As part of his session at Nipper Knolls Equine Center, Nero is helping to get Sonny ready. Hence, the frequent starts and stops, and readjustments in the tack. Nero just seems to enjoy the attention.

Lamando is a board-certified Hippotherapy Clinical Specialist as well as a certified PATH International registered riding instructor. She and her husband David started Nipper Knolls Equine Center to merge Cathy's passion of helping others as a physical therapist with her love of horses.

“About eight years ago we were in the market for a bomb-proof therapy pony,” explained David. “Then we got a call from Easy Street Animal Rescue that an extremely underweight Thoroughbred needed a place to recuperate from a bad situation. So, we agreed to help out. That was how we acquired Sonny. He turned out to be the perfect horse for our program.”

Sonny retired at 10 while still sound and became a riding horse. He lived with one companion horse. When his friend died, Sonny was leased to a riding stable. Apparently unable to compete with his herd-mates for food and no special accommodations forthcoming, his condition deteriorated. His former owner went to visit him and found him emaciated. She turned to Easy Street for help. That was when Nipper Knolls stepped in as a foster placement and Sonny found his new calling in life.

“He arrived extremely under weight and it was months before we could put a rider on him,” recalls Lamando. “I rode him first and he was lovely at a walk, trot and canter. So, Cathy began the training to desensitize him, but he had no issues with anything. He has been perfect and extraordinarily kind from the beginning.”

Nipper Knolls Equine Center, a 501 (c) 3 non-profit corporation was founded to provide equine-assisted activities to children who otherwise would never know the enjoyment and benefits of riding and working with horses. Many of the children they serve have special considerations associated with Autism Spectrum Disorder, C.P., Down Syndrome, Delayed Development and Sensory Processing Disorder that prevent them from participating in group activities or sports.

Nero suffers from severe ADHD and Oppositional Defiant Conduct Disorder. His condition affects his ability to learn as well as interact with his family and other children. His grandmother, who brings him every Sunday, says his time with Sonny has changed his life.

“Nero was unkind to our pets and generally hard to control,” explained his grandmother. “He is in his second year of coming to ride weekly and the improvement in all aspects of his behavior is remarkable. He is much kinder and more tolerant. He likes cats and dogs and is generally calm, especially after his riding lesson.”

Nero walked and occasionally trotted in his lesson. He guided Sonny through obstacles and performed tasks such as putting a ring on a cone which is on top of a barrel. Sonny went through the 30-minute class flawlessly responding to the subtlest of cues.

What does it take to keep Sonny happy and healthy? These days he has a 65-pound weight limit to carry, eats three meals a day with alfalfa for lunch and has his own volunteer veterinarian, Dr. Valerie Castora of Heart-Wing Veterinary Services. She specializes in veterinary chiropractic and acupuncture for horses. His lessons are primarily walk with occasional trotting.

“Sonny's happiness and well-being are paramount to us and to Easy Street which still technically owns him,” added Lamando. “We watch him carefully and follow Dr. Castora's recommendations to the letter. He has given so much to us and everyone in his life, he deserves the best.”

Diana Pikulski is the editor of the Thoroughbred Adoption Network, a searchable database of Thoroughbred horses available for adoption.