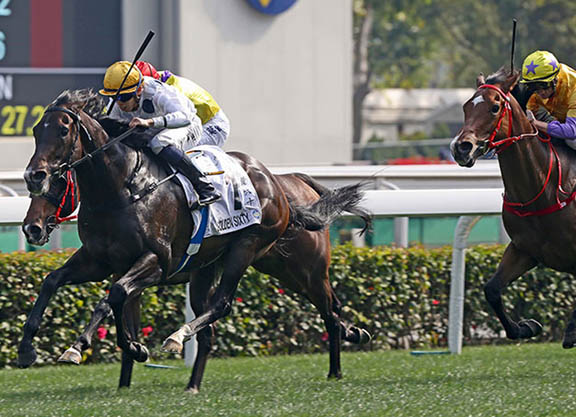 Neither a minor temperature nor Sunday's 1800-metre trip proved a task too tall for the talented Golden Sixty (Aus) (Medaglia d'Oro), who was the recipient of a thinking-man's ride from the up-and-coming Vincent Ho and showed his customary electric turn of foot to add the Hong Kong Classic Cup to his prior victory in the Hong Kong Classic Mile. Now just once-beaten in 10 trips to the races, Golden Sixty can join the late Rapper Dragon (Aus) (Street Boss) as the only horses in history to sweep the 4YO Classics in the BMW Hong Kong Derby in a month's time.

“He's not 100%, that's for sure–he's about 75 or 80%–he won this race because he has a really good fighting heart,” Ho told the Hong Kong Jockey Club's David Morgan.

Given the green light to take his spot after performing satisfactorily at trackwork through the week, Golden Sixty was third-last upon settling, covering the well-regarded Beauty Legacy (Aus) (Fiorente {Ire}), as stablemate and second favourite More Than This (GB) (Dutch Art {GB}) was snagged back to be a joint tail-ender outside of Enjoying (Aus) (Dundeel {NZ}). Positions remained largely unchanged down the back, but in a move reminiscent to that of former Derby hero Designs On Rome (Ire) (Holy Roman Emperor {Ire}), Purton went for More Than This with about 650m to race, ranging up outside of Golden Sixty and leaving that one boxed away on the back of Champion's Way (Aus) (Hinchinbrook {Aus}). But as More Than This made his run unimpeded down the outside, Vincent Ho refused to panic and he shot Golden Sixty through between Champion's Way and More Than This at the 200m. He switched his legs and flashed home fastest of all, his final 400 in a race-best :22.38.

“I didn't want to push the button too early because I might use him too much, so I've waited a little bit, found the gap and he's sprinted home,” Ho said.

Golden Sixty is bred on the cross of Medaglia d'Oro over sire sons of Forty Niner which has yielded the likes of US Horse of the Year Rachel Alexandra (out of a daughter of Roar), champion Songbird and other 10-furlong Grade I winners Elate and New Money Honey (each o/o a Distorted Humor dam). His deeper female family includes the likes of champions Bosra Sham and Hector Protector and MG1/GISW Ciro.