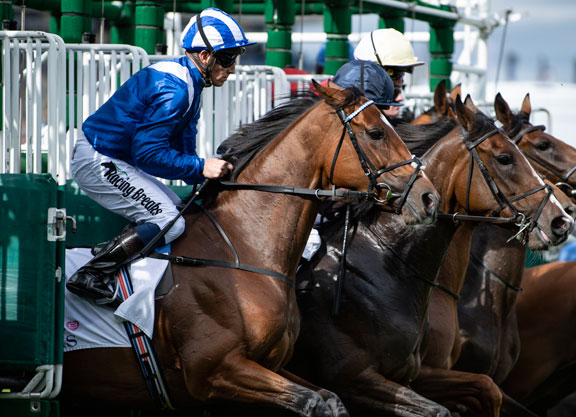 Goodwood’s Qatar Festival has lived up to its “Glorious” tag all week and Saturday sees the culmination with the G2 Qatar Lillie Langtry S. the key race for the staying fillies and mares. Despite there being only four participants, they are all notable performers in the category and last year’s winner Enbihaar (Ire) (Redoute’s Choice {Aus}) will have to be at or near her best to bring up the repeat. Twelve months ago, the Shadwell representative gave a stone and a five-length beating to Manuela de Vega (Ire) (Lope de Vega {Ire}), defying the anchor of a combination of weight-for-age and a penalty here prior to adding Doncaster’s G2 Park Hill S. to her tally. Perhaps undone by testing ground when third in the G1 Prix de Royallieu at ParisLongchamp and fourth in the 12-furlong G2 Princess of Wales’s S. on her seasonal bow at Newmarket July 9, she has ideal conditions again here.

Shadwell’s racing manager Angus Gold is looking for improvement from her comeback effort.

“I thought she stayed on well in the last part of the race at Newmarket,” he explained. “It was her first run of the year, the trip was a bit short and the ground was soft enough for her as well. Hopefully, the ground will be on the quick side on Saturday, which will certainly help her. She is showing incredible enthusiasm and has this extraordinary action. You can never take anything for granted, but I would hope she’ll put her best foot forward.”

Since her heavy defeat in this last year, Manuela de Vega has come back at four a different proposition but had soft ground to suit when taking Haydock’s G3 Pinnacle S. June 7 and G2 Lancashire Oaks July 5 over a mile and a half. She gets the three-pound penalty as a result this time, which makes it all the harder for her to deal with Enbihaar but trainer Ralph Beckett is willing to give it a go.

“She’s in very good shape and we’re hoping she can go one better than last year,” he said. “We think she’s pretty adaptable ground-wise–I don’t think it makes too much difference to her. It won’t be easy giving the penalty away, but it’s feasible.”

Aside from that duo, the 3-year-olds Snow (Ire) (Galileo {Ire}) and Cabaletta (GB) (Mastercraftsman {Ire}) are worthy of respect with the former coming in on the back of a fifth in the G1 Irish Oaks at The Curragh a fortnight ago and Cheveley Park Stud’s TDN Rising Star Cabaletta also backing up quickly having won Newbury’s Listed Aphrodite S. over a mile and a half on the same day.

Deauville ramps up the action as the August Festival gets underway in earnest, with the G3 Prix Six Perfections Sky Sports Racing and G3 Prix de Psyche Sky Sports Racing enjoying a share of the focus. In the former for 2-year-old fillies, Sean Mulryan, Linda Shanahan and Susan Magnier’s unbeaten See The Rose (Ire) (Kendargent {Fr}) returns to the scene of her smooth six-furlong conditions success July 12. She has to deal with Godolphin’s Wedding Dance (Ire) (Invincible Spirit {Ire}), a member of Charlie Appleby’s academy which always does well here and she impressed with a 3 1/4-length success in a Newmarket maiden over this seven-furlong trip July 11.

“We were very pleased with Wedding Dance last time out, when she won nicely and she came out of the race well. This looks a nice opportunity for her to step up in grade,” her trainer said.

In the Psyche over a mile and a quarter, Shadwell’s Raabihah (Sea the Stars {Ire}) will be a warm order, having finished a short neck and two head margins behind the subsequent G1 Nassau S. winner Fancy Blue (Ire) (Deep Impact {Jpn}) when fourth in the G1 Prix de Diane over 10 1/2 furlongs at Chantilly July 5. Again, Godolphin are at the fore with the Andre Fabre-trained Alkandora (GB) (Nathaniel {Ire}), who took ParisLongchamp’s Listed Prix Melisande also over 10 1/2 furlongs last time July 2.

“Alkandora is in good form and has done really well since her last race,” Godolphin’s Lisa-Jane Graffard said. “She will appreciate a step up in trip in time, but Andre is very happy with her condition and she deserves a try at this level.”

Also in the mix is Tweenhills Fillies and Meridian International’s impressive June 7 Listed Pretty Polly Fillies’ S. winner Run Wild (Ger) (Amaron {GB}), who will be more at home back at that trip having finished last in the G1 Coronation S. at Royal Ascot June 20.