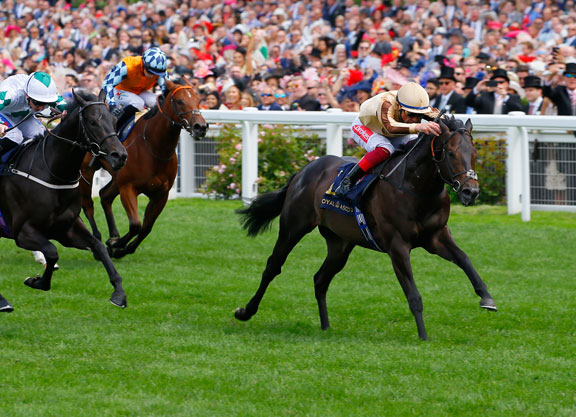 Europe’s racing on Sunday spans from The Curragh to Dusseldorf, with Deauville in between offering a key 2-year-old contest in the G2 Darley Prix Robert Papin. Staged over the unique distance of 5 1/2 furlongs, it has attracted Shaikh Duaij Al Khalifa’s G2 Norfolk S. winner A’Ali (Ire) (Society Rock {Ire}) who bids to inflict another in a string of defeats on the French-trained contingent. Going from a defeat on debut at Ripon June 5 to a neck verdict over Saturday’s Weatherbys Super Sprint disappointment Ventura Rebel (GB) (Pastoral Pursuits {GB}) in the June 20 Royal Ascot speed test, the Simon Crisford trainee bids to become the sixth British-trained winner since 2012.

The exception is the filly Jolie (Fr) (Power {GB}), who in another stride would have beaten the Norfolk abstainer Maven (American Pharoah) in the G3 Prix du Bois at Chantilly June 29. At The Curragh, the G2 Friarstown Stud Sapphire S. features some usual suspects among the sprinting scene and the 3-year-old Soldier’s Call (GB) (Showcasing {GB}). Third in the G1 King’s Stand S. at Royal Ascot June 18, Clipper Logistics’ representative has proven ultra-consistent throughout his brief career so far and evades a penalty for his G2 Flying Childers S. success at Doncaster in September.

The defection of June 19 G2 Duke of Cambridge S. winner Move Swiftly (GB) (Farhh {GB}) from the G2 Kilboy Estate S. due to the fast ground robs that nine furlong contest of some competitiveness and it provides Ballydoyle ‘TDN Rising Star‘ Star Goddess (Camelot {GB}) with a chance to return to winning ways. She has been gently eased back to competitive action and her latest third, albeit beaten nine lengths, in the June 26 Listed Naas Oaks Trial and the fact that Ryan Moore picks her over two fillies with better form suggests she is on her way back.

Last year’s G1 Prix du Jockey Club hero Study of Man (Ire) (Deep Impact {Jpn}) looks for his first win subsequently in the G3 Prix Messidor at Deauville and there will be no excuses on the back of second placings in the Apr. 28 G1 Prix Ganay and May 26 G1 Prix d’Ispahan at ParisLongchamp. Dusseldorf’s G2 Meilen-Trophy sees the May 26 G2 German 1000 Guineas third and July 1 G3 Hugo Phohe-Rennen runner-up Shalona (Fr) (Soldier Hollow {GB}) take on the older horses with the weight-for-age scales swung firmly in her favour.