A Fascinating Clash in the Corrida 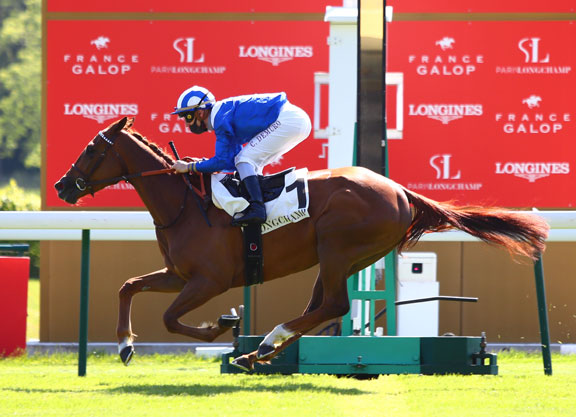 Wednesday's G2 Prix Corrida at Saint-Cloud sees two of France's leading older fillies and mares re-engage, with the 10 1/2-furlong staging post featuring a rematch between the G3 Prix Allez France one-two Ebaiyra (Distorted Humor) and Raabihah (Sea the Stars {Ire}). Just a neck separated The Aga Khan's homebred and the Shadwell contemporary in that ParisLongchamp encounter over a mile and a quarter May 2 and it could be close again with the winner showing surprising pace at a trip that was perhaps short of her best last term. Ebaiyra had been three lengths behind Raabihah when the pair finished sixth and fourth respectively in the G1 Prix de Diane over this trip at Chantilly in July and either side of that effort had won the 12-furlong G3 Prix de Royaumont there in June and Deauville's G2 Prix de Pomone over half a furlong further in August. Even tried over 14 furlongs when third in the G1 Prix de Royallieu on heavy ground at ParisLongchamp in October, the chestnut from one of her owner-breeder's stouter families could be a transformed character in 2021.

Raabihah, who was also successful in Deauville's 10-furlong G3 Prix de Psyche in August and second to Tarnawa (Ire) (Shamardal) in the G1 Prix Vermeille and fifth in the G1 Prix de l'Arc de Triomphe over a mile and a half at ParisLongchamp, remains an exciting prospect at four for the Jean-Claude Rouget stable. They both have to contend with Masaaki Matsushima's impressive Listed Prix Dahlia winner Amarena (Fr) (Soldier Hollow {GB}), who showed how much she relishes this ground when winning that 10-furlong contest here in October and who is entitled to take a step forward for her return fifth in ParisLongchamp's Listed Prix Zarkava over this trip Apr. 11.