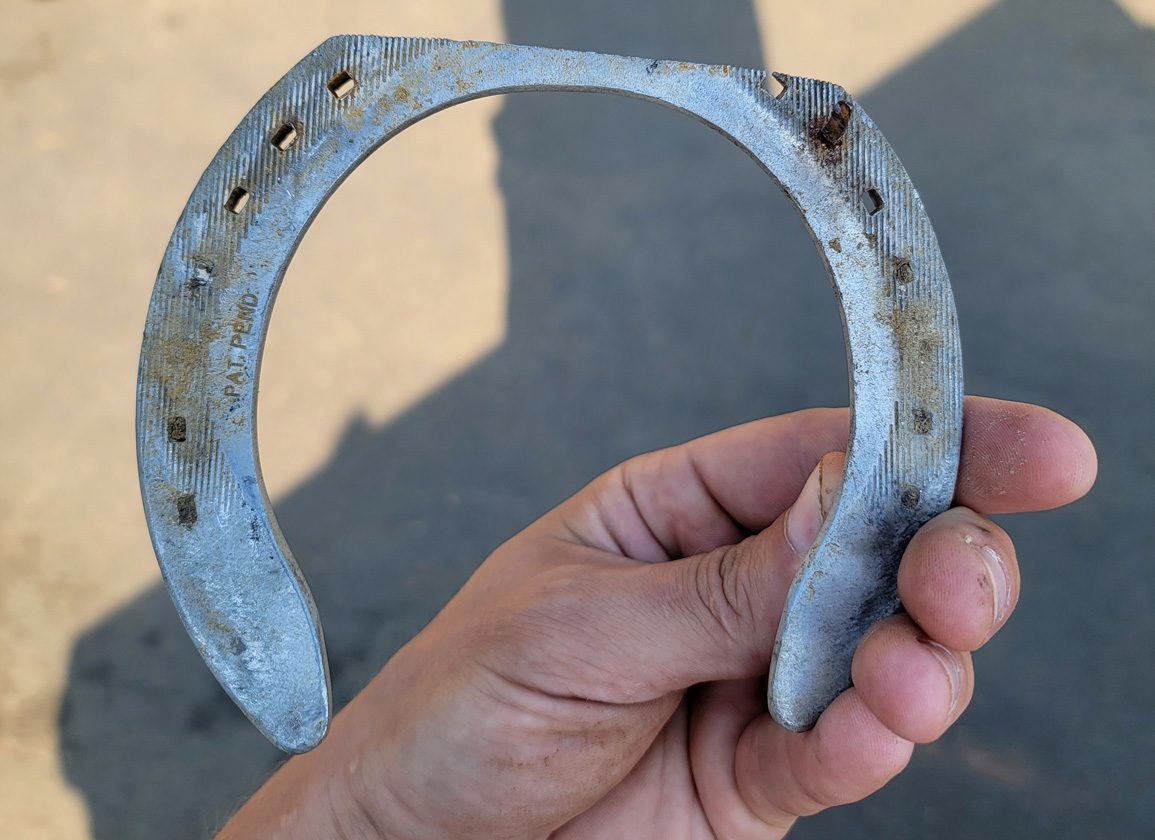 Curtis Burns is passionate about horses. Like many in the horse industry, he credits the horse for everything that he has. A lifelong horseman, he grew up in the Minnesota, noting his then small stature had him poised to be an exercise rider or jockey prospect. However, at around age 14 a chance opportunity led him to the racetrack.

“Pretty much from there I never went home,” he said.

Burns now wears many hats–farrier, innovator, teacher, and the manufacturer of the Polyflex Shoe and other farrier products. He told the TDN he was willing to step out of the shadows of the backside to lend a voice to ongoing concerns he has fielded in recent weeks from multiple farriers from several jurisdictions about one of the new Horseracing Integrity and Safety Act (HISA) regulations.

Burns shared photos of recently removed horseshoes provided to him by farrier Gary Gullo highlighting the severely compromised integrity of front shoes lacking extra toe, in accordance with HISA rules. Burns explained that the issue was popping up at tracks where the horses traverse the backstretch on pavement or macadam, which was leading to severe wear in the front of the shoe. He said that without the extra toe, the realities of maintaining the aluminum shoes' integrity is proving challenging.

Additionally, reports include observations of abnormal dorsal hoof wall wear, with some back to the white line, which is not good for Thoroughbreds, who are famously thin-walled and sensitive.

Queen XT horseshoes–widely worn until the new regulations came into effect–offer a hardened steel toe piece extending two millimeters above the aluminum, acting as an additional durable layer for the aluminum plate when coarse surfaces are encountered.

“We are just about a month in a half into the new rules,” said Burns. “We are not seeing the problem everywhere. However, the Queen XTs, with a hardened steel strip on the toe no more than the width of quarter, eliminates the aluminum wearing away with each foot fall. Honestly, I wasn't overly concerned when the initial rules came out, however, some of the shoes are wearing significantly.”

Burns said that he was a staunch HISA supporter, noting that during his years of travel around the country, “I struggled a lot just getting licenses and with the differing regulations. I often thought, 'why in the world are we not able to get a uniform license, we are all doing the same thing?'”

Burns indicated he was optimistic for HISA's mandate and future, and hopeful that HISA regulations will level the playing field. However, he also added his hope that HISA would reevaluate the shoeing rules in light of this new evidence and allow for the use of Queen XTs.

By design, he said, having the additional steel better maintains the integrity of the soft metal aluminum toe, offering better resistance to the abrasive surfaces horses encounter at some backside stabling areas.

Burns also reinforced the need to change certain vocabulary, clearly defining what should be considered a 'traction device.'

“It's not a traction device,” he said. “It's a wear plate. All we are asking for is the Queen XT, which eliminates the wear problems that we are starting to see. Most of the top barns have generally always used these. If they would have just said Queen XTs all the way around, I wouldn't have thought that much of it the new HISA rulings. I didn't see how that would be detrimental to the horse.”

Burns said that the unusual wear pattern he described has also created issues for trainers who are forced to “short cycle” the normal four-week interval for shoeing to avoid the potential for injury or catastrophic consequences caused by the shoe's deteriorating integrity. With a shortened shoeing cycle, farriers are faced with limited amounts of hoof to trim, as well as an additional possibility that the hoof wall will be further compromised with additional nailing. Additional consequences of the shortened shoeing cycle include the further cost outlays for trainers, owners, and farriers.

Burns said that he hoped that HISA would consider these findings and further contemplate an amendment with an allowance for the usage of a wear plate up front. He noted the organization's willingness to amend a shoeing rule to allow for traction devices to be used behind after reports of slippage due to a lack of traction behind, the source of the horse's power.

When asked to comment, HISA offered the following statement: “HISA's shoeing rules were created and refined in collaboration with horsemen, and HISA will continue to listen to feedback from farriers and other experts as we implement HISA's rules. The rules were drafted with equine safety and welfare as the top priority above all else. HISA's decisions have been consistently rooted in research, and as additional research continues to emerge, HISA will ensure its policies are always grounded in the latest science. HISA also continues to work directly with manufacturers to ensure they are producing shoes that comply with HISA's rules and prioritize equine safety.”