A Conversation About Accuracy: 30,000 Falsehoods Annually 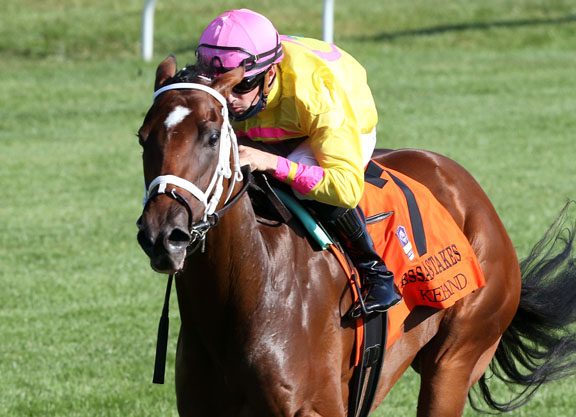 While Aunt Pearl's performance in the [GII] J.P. Morgan Chase Jessamine S. Oct. 7, 2020 was an impressive gate-to-wire score in a sizzling time, smashing the stakes record by more than two seconds, the pesky un-timed portion of nearly every American race played a role in the eye-popping clocking.

“Run-up” is the distance from where the gate is placed and the timing of the race begins–that is, the point at which the horses reach the published distance of the race. The Jessamine, and nearly every other race in North America, is not run over the distance listed in the program or past performances. So, when reporting the race was “1 1/16 miles”–that is really only the portion of the race which is timed, not the full distance run.

The actual distance the race covers, naturally, is the point from where the gate is placed to the finish, but depending on how far the gate is from the published distance of the race will dictate how much of ground at the start is covered before the horses reach the point which is 1 1/16 miles from the finish.

In the case of the Jessamine, the initial Equibase chart of the race reported 216 feet. Keeneland later informed Equibase that distance is closer to 100 feet, and the chart was amended.

The Daily Racing Form's Marty McGee covered the issue in the days after the race:

“[Bob] Elliston said additional gaps for entry to the turf course have been added this fall 'in an attempt to try to preserve the surface by not placing the starting gate at the same position on the turf course at [often-run] distances. The gate can rough up the course through that kind of repetition.'

“For the Jessamine, the gate was 'placed the farthest back of all the gap options,' Elliston said. 'Obviously, this is the kind of thing handicappers have a right to know about beforehand, so we're making that information available on a regular basis.'”

At the suggestion of the Thoroughbred Idea Foundation (TIF), Elliston confirmed that Keeneland would begin updating the daily run-up information on the track's website, which can be found here on the “track conditions” page.

“We thank Keeneland for their attentiveness to the situation and getting the updated information to the public,” said Patrick Cummings, Executive Director of TIF.

“There needs to be an industry-wide discussion about accuracy in our sport. Every time entries are drawn for a new race, and they are published, our industry is misled into believing a race is being run over the distance that is listed. That is false–our sport reports about 30,000 falsehoods a year just in terms of the accurate distance of races run. We report the distance timed, not the distance run, and in so doing, disrespect everyone in the sport, but most especially the horseplayers and the horsemen.”

From the break of the gate to the finish in the 2020 Jessamine, Aunt Pearl ran for about 1:46. Last year in the same race, Sweet Melania ran for about 1:45. Images [found on] YouTube of each race show the gate in different positions relative to the distance poles on the various courses.

Craig Milkowski of TimeformUS confirmed from video timing software that the 2020 Jessamine field ran for about 5.31 seconds before timing began. He added that, based on this method of timing one-mile dirt races at Santa Anita, which have a reported 160 feet of run-up, routine run-up times are around 4.95 seconds. At Del Mar over the same distance, run-up is reported at 200 feet and the time is about 5.75 seconds of un-timed racing before the clock begins and horses reach the point one mile from the finish.

TIF published a report several weeks ago which highlighted gross inaccuracies in distances run at Saratoga, Gulfstream Park and Kentucky Downs. There have been few changes.

On the last day of racing at Gulfstream prior to their seasonal shift to Gulfstream West, Mo of the West won Race 9 carded at one mile on turf. The published final time was 1:36.44, but the horses actually ran for about 1:44.

“Aunt Pearl looks a very nice filly,” Cummings said, “but the raw information our sport presents to customers suggests she was potentially 12-14 lengths faster than any previous winner of the Jessamine.

“Even if Aunt Pearl is to be a future superstar, the next Zenyatta, it is almost impossible to believe she is that much faster than all previous winners of the race. What is not doubted is that she covered a longer course in the 2020 Jessamine, which seems to have had the longest run-up of any previous edition, and thus made the times faster given she got up to a higher speed once the clock started.

“This is just another reason that the sport's speed and pace figuremakers are valuable for racing, they serve as an incredibly valuable check-and-balance to the raw data the sport presents. Take nothing away from the horse, but the times can be very misleading to the public given that tracks are not putting the gate in the same place and races are not effectively run over the same distance, particularly on turf, from year-to-year. In a sport where the difference between a big win and total loss can be incredibly small, accuracy matters so much.”