A Classic Chance For Houldsworth 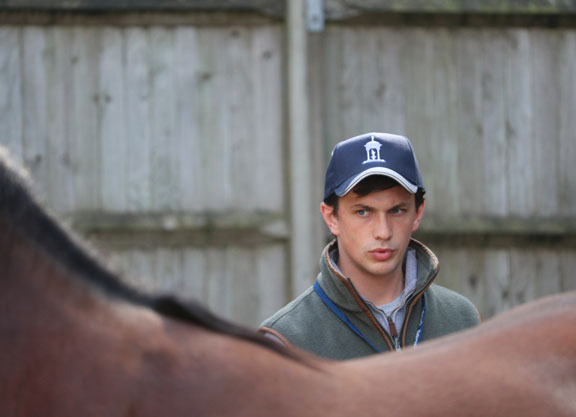 For young Bloodstock Agent Matthew Houldsworth, this year's G1 2000 Guineas could see him rising to the top as a shrewd judge of Thoroughbred athleticism. After purchasing Phoenix Of Spain (Ire) (Lope De Vega {Ire}) as a yearling alongside business partner Geoffrey Howson for owners Tony Wechsler and Ann Plummer, he has seen the colt win two of his five starts as a 2-year-old as well as placing second in the G1 Futurity S.

Houldsworth sat down with Alayna Cullen to talk about Phoenix Of Spain as he prepares for the Guineas.

TDN: Matt, this is a very exciting time for you as we head toward the 2000 Guineas. Firstly, tell us what you remember of Phoenix Of Spain as a yearling.

MH: We loved him. He was a great big raw horse, and initially when we looked at him, we thought he might take a bit too much time for us. We were looking for a mid-season 2-year-old for our clients. We kept going back to see him, and we thought he was actually very mature for a big horse, and he came from a very good consignor in Michael Fitzpatrick of Kilminfoyle House. He was nice and early on the first day of the sale as well, and sometimes you can find a bit of value at that time.

TDN: How did the connection with the owners come about?

MH: He's owned by a wonderful couple called Ann Plummer and Tony Wechsler. Geoffrey has actually known Ann since the 1980s, and he's been dealing with Ann and buying for Ann for a long time. Then I suppose in the last four or five years, Tony and Ann got together and decided that they wanted to buy a few slightly more expensive, better horses and particularly focus on Book 1. Normally we'd always go to Doncaster and buy something, and we still do, but it was Tony in particular who wanted to try and have a go at Book 1 and see if he could find something to be a Classic contender.

TDN: He was quite a classy 2-year-old. Just remind us what he did last season.

MH: I remember it was about May time and Charlie rang up saying, “I think this horse might take a bit of time.” Then as the season sort of progressed and we got a bit further into the year, he said, “No, I think this is a very, very good horse.” He ran very well first time out, not given a hard ride at all, then when he won his maiden at Wolverhampton in such style it got everyone very excited.

I remember going to York thinking it'd be lovely to come third or fourth, and then when he went and did what he did, coming with a strong run up the rail, it was one of those moments that I don't think any of us will ever forget. He came second to Too Darn Hot (GB) in the [G2] Champagne S., which was hugely exciting. He was just beaten a head in the G1 Futurity S. at the end of the season, which was quite hard to take. You don't mind being beaten a length or so, but being beaten a head or so was quite hard. But it showed that we had a nice horse to go to war with as a 3-year-old.

TDN: How do you think he has wintered?

MH: I think he's wintered very well. He's a big horse anyway and he's grown again. He's really filled out and manned up. He was always a big strong horse anyway, but he's leveled off now. He's just got an amazing mind and I think that's really stood him in good stead up until now. Nothing seems to faze him. What he did at two really has been a bonus. We were looking at him thinking he'd be more of a 3-year-old type anyway.

TDN: We recently saw him have a racecourse gallop. Were you and the team happy with what you saw and how is preparation going ahead of the Guineas?

MH: Prep has gone well. Like I said, he's a big horse so he takes a bit of getting fit, but no, we were very pleased with the gallop. Jamie Spencer rode him and said he was delighted with him. That's actually the first time he's ever been to Newmarket. He's never been there before. He handled the dip very well and then galloped on nicely up the hill. Whether he'll run in the English Guineas, we don't know at the moment. There's still discussions to be had, but he did everything very nicely the other day.

TDN: You work in partnership with Geoffrey Howson but for you this is a first Classic contender that you've had a hand in picking out. How are you feeling heading toward the Guineas?

MH: Oh, it's hugely exciting, and I owe everything really to Geoffrey, it's still both our names at the top of the sheet. It's good of him to have allowed me to help him for so long and to work with him, and particularly with this group of owners as well who he's known for a long, long time; they're more friends than anything. So it's very exciting, very special to be involved in.