Home » Archive » Shared News Europe » A 'Beauty' Of A Debut

A 'Beauty' Of A Debut 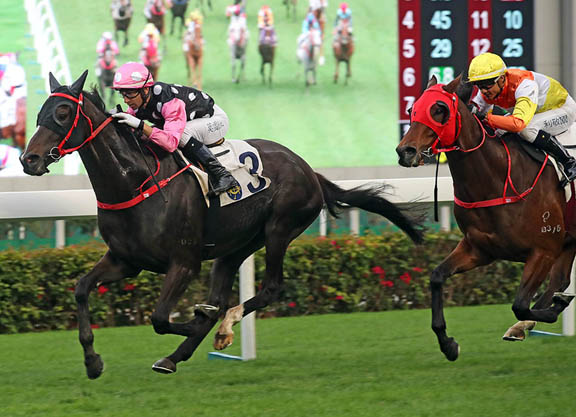 Rare is the import that can win first-up in Hong Kong in competitive Class 2 company. But if there is a conditioner on the grounds at Sha Tin capable of extracting a top effort despite that obvious obstacle, it is John Size, who sent out Glorious Days (Aus) (Hussonet) to win the 2013 G1 Longines Hong Kong Mile off a six-month absence, while 2015 Hong Kong Derby hero Luger (Aus) (Choisir {Aus}) nearly won the G1 Stewards' Cup the following January after being away from the races for nearly three-quarters of a calendar year.

Still, for all his Hong Kong trainers' premierships (11 of them) and for all he has accomplished in a storied career, Size had only sent out one such previous winner in Class 2. That tally doubled Sunday when Beauty Legacy (Aus) (Fiorente {Ire}) stormed up the rails to score as a $9 (8-1) chance on debut.

A head-strong and free-wheeling type when conditioned in Australia by David and Ben Hayes and Tom Dabernig as Hawkshot, Beauty Legacy was to be ridden back in the field, Size said earlier in the week, owing to his awkward draw in gate 12 and the oft-frenetic early pace of races in Hong Kong. Joao Moreira allowed Beauty Legacy to find his stride and, indeed, eased the gelding out to sit third last while edging down to the inside of the track. Still well back as the field hit the entrance to the straight, Moreira gambled up the fence and it paid off, as he tossed in a final 400 metres in a race-fastest :22.22 to defeat favoured Happy Fun (NZ) (Darci Brahma {NZ}) by a half-length (video). Fellow 4-year-old Decrypt (GB) (Dark Angel {Ire}) kicked on for third with a second-quickest final section of :22.44.

“The horses that start in Hong Kong rated above 90, very few of them win their first start, so you can't be anything but complimentary towards the performance of the horse,” Size told the Hong Kong Jockey Club's David Morgan. “After I watched his races in Australia, I thought he was going to take some managing so we'd have to contain that energy so he uses it in the correct manner.

He continued, “Today, everything went perfectly. Whether that happens in the future is another matter, but he did draw a bad gate today; he showed he can give away a start and win, so we learned something. He was a little bit anxious today, first start at Sha Tin, so when he comes back next start for his second run, you'll know then whether he's going to be manageable or not–he's going to be worse or better.”

That next start is to come in the Hong Kong Classic Mile Jan. 27 with a trial in between, Size said.

Moreira was also duly impressed with the effort.

“He is one of a kind,” he said, “He's got presence, he's got temperament, he's got scope and he's got ability as well. Horses that get back first time out in such a strong class of race and do what he's just done, they must have class and I think he's one of them.

The Brazilian added, “He feels like he's promising. It's hard to say he is the one (to win the Derby) right now because there are a lot of horses untouched, but as time goes by we'll see them all and there's no doubt he's one of those that is shining at the moment.”

Bred in Victoria by Sun Bloodstock, the former Hawkshot won on Ballarat debut in March 2018, but really came to hand about this time last year, winning Caulfield's G2 Autumn S. by 3 3/4 lengths in February before finding only Mystic Journey (Aus) (Needs Further {Aus}) too strong in the G1 Australian Guineas. He was last seen finishing second to the Tasmania-based mare in the valuable All-Star Mile at Flemington last March. Beauty Legacy was purchased by the Kwok Family for a reported A$2 million, with the BMW Hong Kong Derby (2000m) the primary objective.