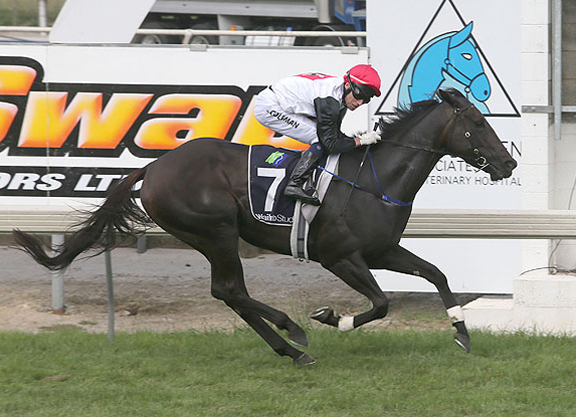 Since taking the 2015 edition of the 1200-metre NZ$200,000 G1 Sistema Railway S. with Natuzzi (NZ) (Coats Choice {Aus}) third, Ryan Mark (NZ) (Thorn Park {Aus}) has yet to return to the winner's enclosure in six subsequent appearances and is looking for redemption on New Year's Day. The 6-year-old gelding trailed in seventh after an awkward beginning in a Ruakaka handicap going this trip upon resuming Aug. 6. Runner-up to Nov. 9 G3 Lindauer Stewards Stakes H. hero Reilly Lincoln (NZ) (Pins {Aus}) in a similar contest at Hastings Sept. 17, Ryan Mark filled the same position in the wake of Start Wondering (NZ) (Eighth Wonder {NZ}) in the 1200-metre Listed Legacy Lodge Sprint S. at Te Rapa Nov. 5. He enters on the back of a 10th-place finish in Ellerslie's G3 J.A. Russell Ltd. Concorde H. to one-two finishers Natuzzi and Irish Moon (NZ) (O'Reilly {NZ}) Dec. 3.

“There's no doubt he's spot on,” co-trainer Evan Rayner said of Start Wondering, who he trains with his daughter J. J., to Racing And Sports. “He looks great and he's working and eating well. He just didn't handle it [the heavy going found in the Listed Chainey's Panasonic Levin S.] at all.”

G1 New Zealand 1000 Guineas fifth-place finisher Astara (NZ) (Dalghar {Fr}) could also have a say in the outcome, victorious in the Listed Soliloquy S. at Ellerslie in October, she makes the field with only 112 pounds.