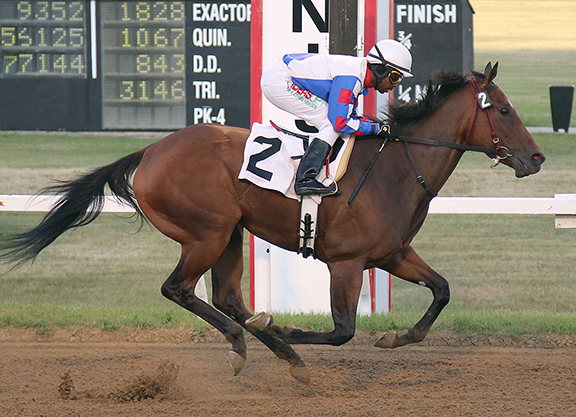 Hidden Grace (Going Commando), a 9-for-9 Manitoba-bred, will seek a perfect 10th straight stakes victory in her 4-year-old debut Wednesday night in the $25,000 Canada Day S. at Assiniboia Downs.

Hidden Grace has raced exclusively in Manitoba (eight starts) and Alberta (one start), with five of her nine stakes victories coming against provincial-bred or sales-restricted company. Essentially, she has wrapped up every single one of her wins by the eighth pole, having never been headed in the stretch.

Her breeder and owner partnerships are comprised of some of the same people who bred and raced the hard-trying overachiever Escape Clause (Going Commando). That mare retired last autumn with 20 wins and $866,100 in earnings after emerging from small-circuit racing in Canada to win 2018 stakes at Del Mar and Santa Anita before losing only by a nose to the powerful Midnight Bisou (Midnight Lute) in the 2019 GI Apple Blossom H. at Oaklawn.

Hidden Grace is owned and was bred by Cam Ziprick, Charles Fouillard and Barry Arnason. As a yearling, Ziprick consigned her to the Canadian Thoroughbred Horse Society (Manitoba Division) sale, then bought her right back for $11,919. This transaction made her eligible to compete in the stakes program for horses sold through that auction.

In addition to her provincial- and sales-restricted stakes dominance, Hidden Grace has also won four $30,000 open stakes at Assiniboia. She's been off since October and will make her first start for a new trainer, Murray Duncan, after being previously trained by Michael Nault in 2019 and Don Schnell in 2018.

He main competition in Wednesday's second race, which is a 7 1/2-furlong open stakes, will come in the form of Miss Imperial (Maclean's Music), who is also conditioned by Duncan.

Miss Imperial sports an 8-for-18 record after stints in the barns of trainers Jason Servis, Joe Sharp, and Brad Cox on the New York, New Orleans, and Oaklawn circuits. She was claimed three times for decreasing prices between last August and this April ($50,000, $40,000, $25,000), and it was Duncan who most recently dropped a slip for her at Oaklawn Apr. 11. Since shipping to Winnipeg, Miss Imperial has wired two open sprint stakes.