By Way of Golden Gate, Nyquist Headed to Florida Derby 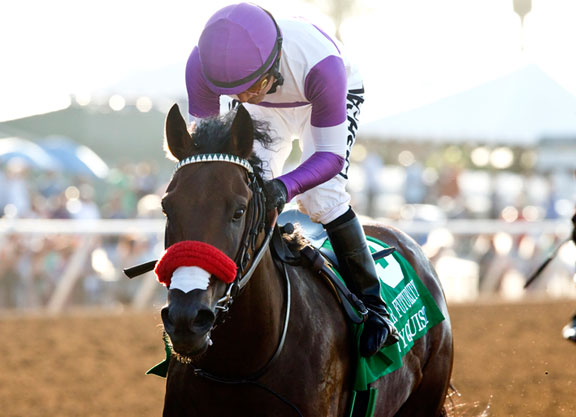 Concerned about the havoc El Niño may play on the racing and training conditions this winter at Santa Anita, trainer Doug O’Neill has decided to take some unusual steps in order to best prepare his soon-to-be named Eclipse Award winner Nyquist (Uncle Mo) for the GI Kentucky Derby.

O’Neill told the TDN that shortly after Nyquist’s next work at his home base of Santa Anita he will ship him and a “handful” of other horses to Golden Gate Fields. While there’s no guarantee the weather will be any better in Northern California than Southern California, O’Neill knows that he can stay on a steady training schedule at Golden Gate because its synthetic surface is impervious to water.

“With the weather situation we’re facing here I just don’t feel I can take any chances with [Nyquist],” O’Neill said. “By shipping him up North to train over that really good synthetic surface at Golden Gate I know I can train him on a consistent basis. Golden Gate has been very nice about this and cooperative. They don’t have a lot empty stalls, but it looks like they found 12 for me.”

As long as the Santa Anita track remains in decent shape, Nyquist will return south to make his 3-year-old debut in the

GII San Vicente Stakes on Feb. 15. The San Vicente is run at seven furlongs. From there, his next race will be in the GI Florida Derby at Gulfstream on Apr. 2.

Derby, among them that he doesn’t have to worry about El Niño issues in Florida.

“I love the fact that the Florida Derby is five weeks out from the Kentucky Derby,” he said. “I think that extra week, versus some of the other big preps, is a huge advantage. Then, of course, there’s the bonus.”

The bonus is the $1 million that will be paid out to any horse sold last year at Fasig-Tipton’s “The Florida Sale” that goes on to win the Florida Derby. The bonus was established only last year.

O’Neill continues to have plenty of confidence in his horse and scoffs at anyone who doesn’t believe the colt can go the mile-and-a-quarter in the Kentucky Derby.

“They say he can’t go a mile-and-a-quarter, well, basically, he went a mile-and-a-quarter in the Breeders’ Cup with how wide he ran and the ground he lost on the turns,” he said. “That’s a very important factor and that’s why all the really good handicappers use either the Ragozin or Thoro-Graph sheets.”

Nyquist was the best of a sensational first crop from sire Uncle Mo last year. He won all five of his starts, including the

GI Breeders’ Cup Juvenile, the GI FrontRunner and the GII Del Mar Futurity. His earnings to date are $1,613,600.