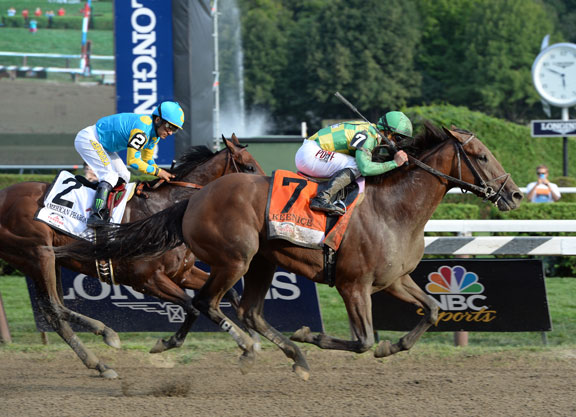 Curlin (Smart Strike), whose son Keen Ice is the only horse to defeat Triple Crown winner and certain Horse of the Year American Pharoah (Pioneerof the Nile) in the GI Travers S. in 2015, will see his fee raised to $100,000 for his first season at Hill 'n' Dale, it was announced Monday. The Horse of the Year in 2007 and 2008, Curlin stood the 2015 breeding season at a fee of $35,000 at Lane's End Farm.

Currenltly seventh on the TDN general sire's list among North American-based stallions with progeny earnings in excess of $9.7 milion in 2015, Curlin has also been represented by GI Santa Anita Oaks Stellar Wind winner and Curalina, victorious in the GI Acorn S. and the GI CCA Oaks, who finished second and third, respectively, in the GI Breeders' Cup Distaff Oct. 30. In addtion to Curalina, Curlin was also at Saratoga by GIII Schuylerville S. winner Off the Tracks and Exaggerator, who took down the GII Saratoga Special S. Additionally, Jess's Dream, the first foal out of Horse of the Year Rachel Alexandra (Medaglia d'Oro) was named a TDN Rising Star. Just this weekend, Curlin's daughter and fellow TDN Rising Star Stageplay proved a popular winner of the Rags to Riches S. on opening day of the Churchill Downs fall meeting.

“The rise of Curlin as an elite sire of Grade 1 winners, on any surface at any distance of either sex, makes him a unique choice for breeders,” commented Hill 'n' Dale President John Sikura. “He has three outstanding Grade 1 winners this year and the best is yet to come. We will support him with our best mares and encourage our clients to do the same. We expect to be oversubscribed and his book will be limited to 125 mares with the ability to add up to 15 additional mares later in the season. Curlin was a rare talent as a racehorse and we believe he is poised to become the next great sire.”

Added Stonestreet Stables' Barbara Banke, “Curlin, the world's best racehorse, has now become a leading sire. He is like a family member to us and we are thrilled by his rise to the top of the stallion ranks. We will continue to support him with our stellar broodmare band, a great diverse group of mares that compliment his versatility. Our goal is to breed Classic winners by Curlin and enhance his legacy as a great sire.”