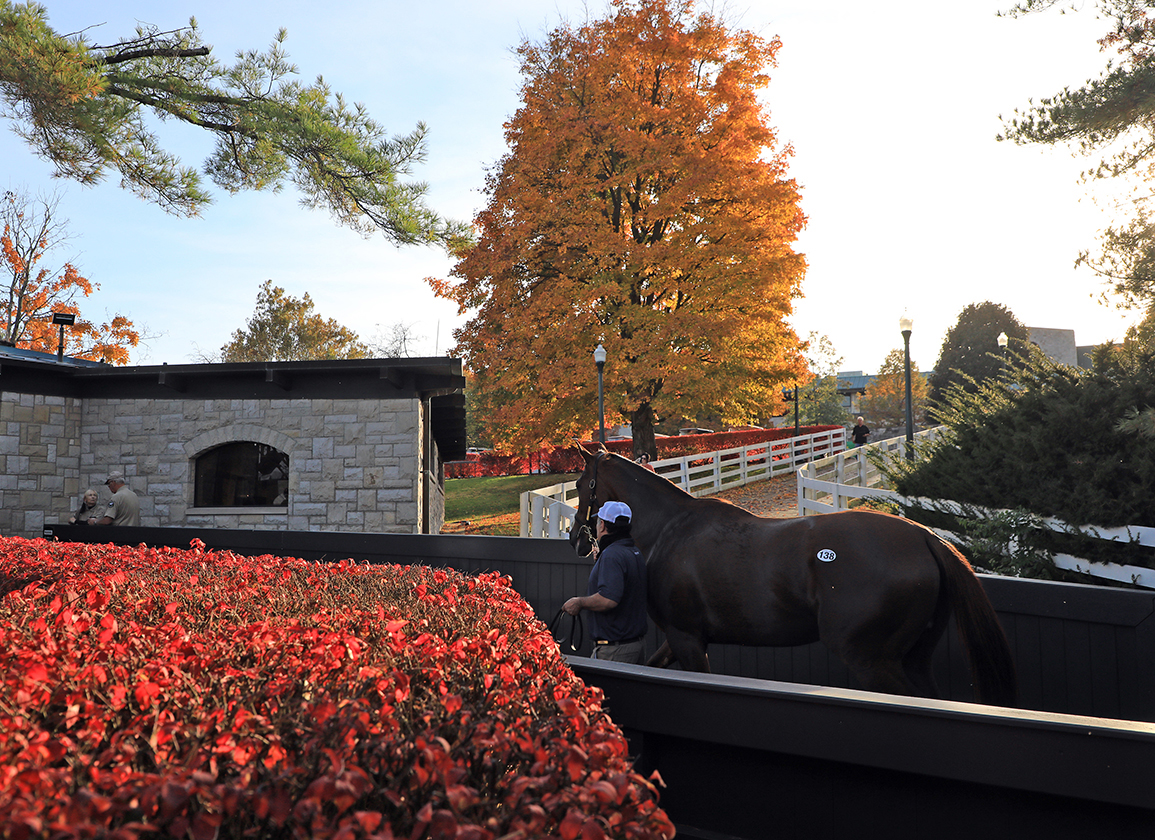 Pop a Choc, a daughter of the increasingly influential broodmare sire Bernardini, was hammered down for $265,000 as the last few grains of sand were passing through the hourglass during Monday's opening session of Book 4 at the Keeneland November Sale in Lexington.

The 4-year-old filly was consigned to the sale by Meg Levy's Bluewater Sales LLC and topped yet another day of exceptional trade in the Bluegrass. A total of 271 horses sold for $10,507,100 Monday, an increase of 67.4% over last year's COVID-affected sale, while the average of $38,772 represented a gain of 63.4% over 2020. The median price of $26,000 was ahead by 73.3% over last year. Twenty horses realized six-figure sums as opposed to six last November.

Noel Murphy's Castle Park Farm consigned and co-bred Monday's weanling topper, selling a colt by Not This Time to Hunter Valley Farm for $200,000.

Pop a Choc Sneaks In Under the Wire…

With just six horses left to sell during the Book 4 opener Monday at Keeneland November, Clear Ridge Stables paid a session-topping $265,000 for hip 2242, the Bluewater Sales-consigned Pop a Choc (Bernardini).

A $330,000 purchase by Justin Casse at Keeneland September in 2018, Pop a Choc was trained by the agent's brother Mark for John Oxley and Gary Barber, breaking her maiden at third asking over the Belmont main track in July 2020 before adding a three-length success sprinting over the Woodbine Tapeta July 17. Levy thought that her placement with time ticking away in the session was actually a positive.

“I think quality has been sticking out, in particular, and I think actually being at the end of the day may have helped her,” Bluewater's Meg Levy offered. “Everybody right now seems to be looking for something they can have a little fun with, run with and not risk too much, hopefully buy something with a bit of residual. She was faster looking than a typical Bernardini with a big hip and straight hind leg. It seems like the stars aligned.”

Levy continued: “She was a really well-balanced filly, deep hip, beautiful neck, very correct. She was a very nice mover and out of a Cuvee mare, so she looked more like that side in terms of her physical. She has a good blend of speed and stamina and Bernardini is such a good horse, for a broodmare prospect especially.”

Through six days of trade at the November Sale, Bluewater has sold 31 horses for $5,364,000, topped by the $775,000 Spanish Loveaffair (Karakontie {Jpn}), who was bought by Doug Cauthen on behalf of Roy and Gretchen Jackson's Lael Stable.

“It's gone quite well,” Levy said Bluewater's success through six days of trade. “I was saying to people today that I look like a bad appraiser today, but I'll take that any day on the under side. It feels good right now. I don't know what's driving the market right now, in particular for the broodmares, because I do feel like it's slanted towards the broodmares. I feel like I see fewer people bidding on the weanlings than I've seen in the past years. Maybe the tax situation is spurring some of the broodmare buying in terms of the ability to depreciate them immediately.”

Gainesway Farm's Sean Tugel signed the winning ticket on Pop a Choc and said they would consult with partners on a potential mate. Given the commercial nature of her pedigree, Pop a Choc could return to a sales ring in the near future or they could elect to sell from her, he said.

The late Mike Recio acquired the newly turned 9-year-old Repartee (Distorted Humor) for $35,000 after she failed to meet her reserve when carrying to Not This Time at the Keeneland January Sale earlier this year. Offered in the first half-hour of trade Monday, Repartee paid tribute to the popular horseman when hammering to Pitlochry Partners for $215,000.

“I'm sure he'd be looking down on us today and smiling,” said consignor Archie St. George after selling the Repartee on behalf of Recio's South Point Sales, who owned the mare in partnership.

Cataloged as hip 1849, Repartee is out of the stakes-winning Dubai Dancer (A.P. Indy), a full-sister to GI Ashland S. winner Little Belle, whose daughter Dickinson (Medaglia d'Oro) was victorious in the GI Jenny Wiley S. The mare's second foal, Munnyfor Ro (Munnings), has made the investment look shrewd. Runner-up for a $35,000 tag over the winter, the chestnut filly broke her maiden in Keeneland maiden special weight company in April and was runner-up in the GIII Selene S. before taking down fellow Ontario-breds in the Woodbine Oaks Aug. 1. Since the catalog, Munnyfor Ro was a close fourth against the boys in the Aug. 22 Queen's Plate, took out the grassy Wonder Where S. Oct. 2 and the Ontario Damsel S. on the synth Oct. 31. To add further luster to the family, Repartee's yearling filly by Unified made $200,000 from Peter Brant's White Birch Farm at Keeneland September two months ago.

“Physically she is a nice, strong mare,” St. George commented “The fact that she's produced a very nice horse that's won over $500,000 obviously helps and the yearling sold very well this year. Unfortunately, she had a bit of bad luck with her produce this year, but on the whole, she produces very nice horse. She'll be a very nice mare for her new owners. It's a nice family and she's a nice, strong mare by a good stallion in Distorted Humor. John Moynihan bought her and apparently she's going to go to Charlatan. I wish them luck and thank them very much.”

St. George reported that the Not This Time foal Repartee was carrying at the time of her purchase suffered a setback and died earlier this year. He added that the mare did not cycle thereafter and was not bred this year.

St. George said he was humbled by the opportunity to consign horses to the November sale on behalf of South Point.

“It's obviously wonderful to sell these horses for the family,” he said. “It's very nice that [Recio's wife] Nancy chose me to represent Mike and his estate and I'm just so happy that the whole thing has gone well. Mike was a good friend and it's very gratifying. The way his horses have been received shows just how well-liked he was in our game. The results show that he bought some really nice horses and it's great to see him reap the rewards.”

It was a case of love at first sight for Castle Park Farm's Noel Murphy and his partner Dermot Joyce when the appropriately named Worth a Chance Mo (Uncle Mo), a daughter of the talented Grade III-winning 2-year-old Just Louise (Five Star Day), went through the ring at the 2020 Fasig-Tipton February Sale. The mare the partners were able to secure for a mere $9,000 some 21 months ago was responsible for the Monday weanling topper at the November Sale when her colt by the in-form Not This Time (hip 1988) fetched $200,000. Hunter Valley Farm was the successful bidder.

“Great result, delighted,” the Irishman enthused. “I knew he was going to sell well, but that was way beyond our expectations. He was a lovely colt, very popular, had lots and lots of vetting.

“The sire is doing very well, he's a very good stallion,” Murphy added. “He's very popular at the moment. He was an exceptional 2-year-old, a beautiful-looking horse and we thought we'd take a chance on him. My partner, Dermot Joyce, was the one to come up with the idea.”

“Dermot pointed her out to me. He manages Springhouse Farm, they bred her,” said Murphy. “He loved the family and he loved all the progeny out of Just Louise, so that's why we did it. She's not the most correct horse in the world, but she is a beautiful-bodied mare, a great-walking mare with a lovely head on her. When Dermot pointed her out, I said, 'we have to buy her, she's a lovely mare.'”

The proverbial cherry on top came less than 24 hours prior to the colt's sale, when Forbidden Kingdom (American Pharoah), the 2-year-old half-brother to Worth a Chance Mo, completed the exacta behind 'TDN Rising Star' Messier (Empire Maker) in Sunday's GIII Bob Hope S. at Del Mar. Forbidden Kingdom won his maiden at first asking at the seaside oval Aug. 21 and was third in the grassy Speakeasy S. at Santa Anita Oct. 1 prior to his effort over the weekend.

Worth a Chance Mo was bred to Global Campaign earlier this year, Murphy said.