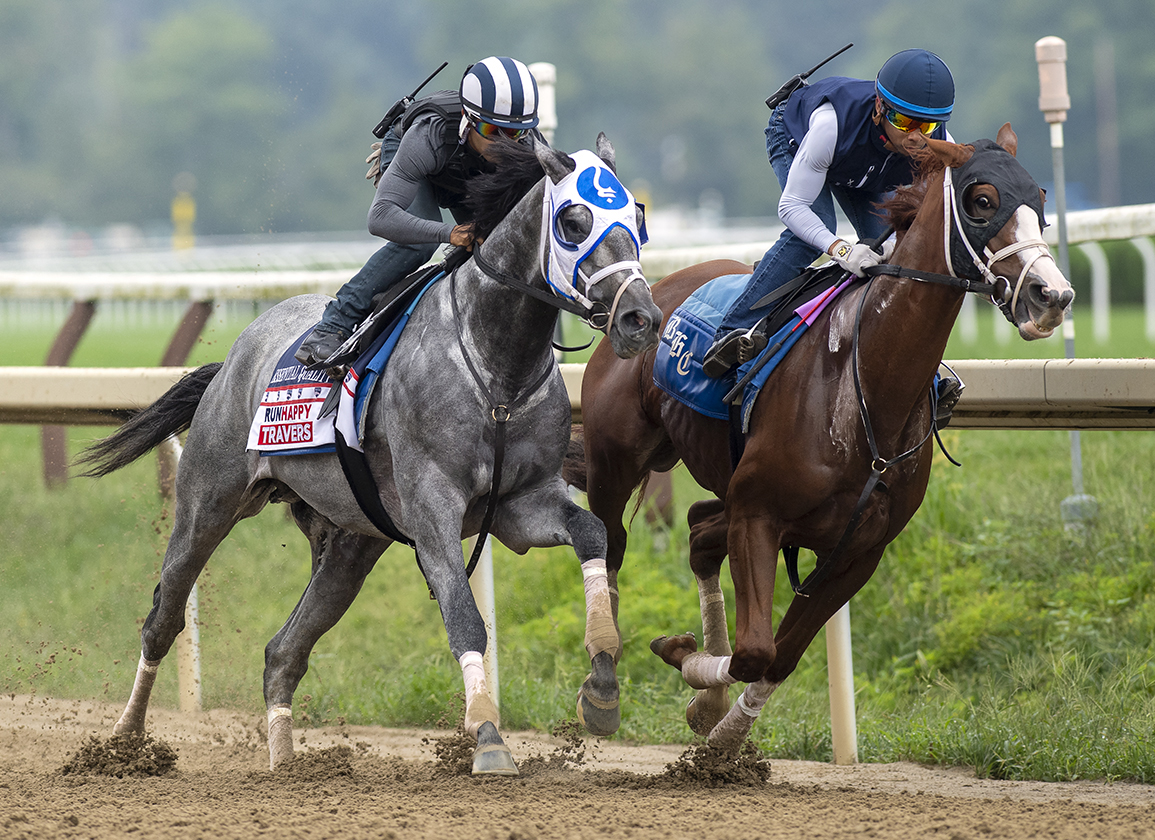 It was a busy morning at Saratoga for 3-year-olds headed towards next Saturday's $1.25-million GI Runhappy Travers S. at Saratoga, headed by GI Belmont S. hero and reigning champion juvenile Essential Quality (Tapit).

The 'TDN Rising Star,' ridden by leading jockey Luis Saez, worked outside of stablemate Bonny South (Munnings) and the duo covered five furlongs in 1:01.58 (10/18). The Godolphin homebred was caught in fractions of :11.40, :23.22 and :47.81 before galloping out three-quarters of a mile in 1:15 flat. Juddmonte's enigmatic Bonny South is also scheduled to race on Travers Day as she is expected for the GI Personal Ensign S.

The progressive Masqueparade (Upstart), a last-out third to Essential Quality in the July 31 GII Jim Dandy S., breezed a half-mile in :48.11 (16/41) under the watchful eye of trainer Al Stall, Jr., who believes there is improvement to come for the GIII Ohio Derby victor.

“With the shipping, I only worked him twice from the Ohio Derby to the Jim Dandy,” Stall, Jr. said. “When we got up here we noticed the track was a little deeper than it was in the past or at least it seemed that way. I think he got a little bit out of that race and it should help him for this race.”

Keepmeinmind (Laoban), who did everything short of win the Jim Dandy after being outbattled to the wire by the champ, tuned up for the Travers with a half-mile breeze of his own in :47.55 (7/41).

“He went very good,” said trainer Robertino Diodoro. “He was doing it nice and easy all on his own and with a strong gallop out once again. Touch wood, everything is on schedule. This was easy as could be and I thought Dennis did a good job because he's not an easy horse to slow down.”

Trainer Ken McPeek, who sent out Swiss Skydiver (Daredevil) to work five furlongs in 1:00 flat at Oklahoma (2/38) for the Personal Ensign, also oversaw the final pre-Travers hit-out for GIII Stonestreet Lexington S. winner King Fury (Curlin), who worked five-eighths of a mile on his own in 1:01.13 (17/38) over the same surface. Runner-up to Masqueparade and a nose better than Keepmeinmind in the Ohio Derby, the son of the late former 'TDN Rising Star' Taris (Flatter) was a latest 10th in the GI Saratoga Derby Invitational on the turf Aug. 7.

“It was a solid breeze. We caught him in a minute,” McPeek said. “It was a nice solid maintenance breeze. The horse can run all day. He's coming into the race great. I think a mile and a quarter will be right up his alley. If he jumps to another level, I think we're good. The turf race was probably a bad idea in hindsight.”

Dynamic One (Union Rags) and Miles D (Curlin), the respective one-two finishers in the July 30 Curlin S., also got in their final major work Saturday. With Irad Ortiz, Jr. up, Dynamic One covered four furlongs in :50.67 (115/144) over the training track, while Miles D, who will try to give Chad Brown a maiden Travers success, stopped the clock in 1:01.16 (19/38) for five panels, also over the Oklahoma surface.

Life Is Good On Edge For Jerkens…

'TDN Rising Star' Life Is Good (Into Mischief), unraced since an eight-length romp in the GII San Felipe S. in early March, drilled five furlongs in 1:00.61 (10/38) as he readies for his comeback test in next Saturday's GI H. Allen Jerkens S. at the Spa.

Now under the care of Todd Pletcher, the $525,000 Keeneland September yearling was completing his fifth breeze at Saratoga since being transferred from trainer Bob Baffert.

“Another very impressive breeze with a tremendous gallop out,” Pletcher said. “He seems to do things effortlessly. He's impressive to watch and it should have him ready to go in what is a demanding task going seven-eighths in a Grade I off a layoff. He seems to be training extremely well.

“I would argue that today was his best work of all, particularly the gallop out,” Pletcher continued. “I had him out the mile in 1:39 and one under a motionless rider. He has a good foundation of fitness.”

Mike Smith, aboard in each of Life Is Good's three previous starts, will be in from California for the ride.

Pro-tem divisional leader Letruska (Super Saver) went five furlongs in a bullet :59.02 (1/18) over the Saratoga main track Saturday morning as she looks for her sixth win in her last seven starts in the GI Personal Ensign S. next weekend.

“Normally, she is a horse who likes to work fast and she worked well today,” said trainer Fausto Gutierrez. “The idea was to feel full of horse and she's a horse that is ready to run.”

Letruska, who celebrated her true coming-out party when winning the GIII Shuvee S. at Saratoga nearly a year ago, accounted for the aforementioned Bonny South by 2 3/4 lengths in the GI Ogden Phipps S. at Belmont June 5 and exits a 5 3/4-length thrashing of her rivals in the GII Fleur de Lis S. at Churchill June 26.