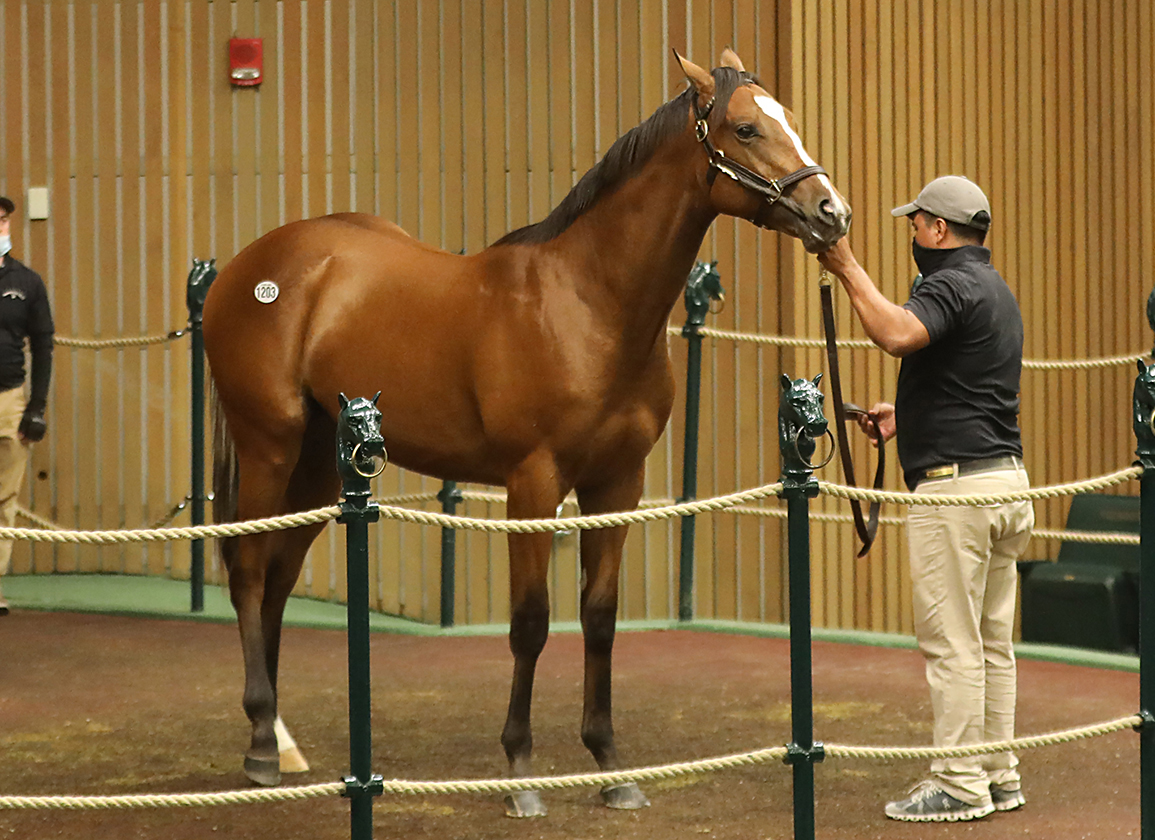 Sponsored by Alex Nichols Agency
1st-SAR, $100K, Msw, 2yo, 6 1/2f, post time: 1:05 p.m. ET
While the GI Alabama S. takes centerstage later on in the program, the Saturday lid-lifter at Saratoga looks a key race in prospect, with any number of booming pedigrees and lofty pricetags on display. Peter Leidel signed the ticket at an even $1 million for RAYMOND (Into Mischief) at Keeneland September last fall, with the colt's breeder Stonestreet Stables staying in for a share. The Apr. 21 foal is the third foal to the races from Stonestreet's GSW & GISP Teen Pauline (Tapit), whose daughter Cambria (Speightstown) took out the Kentucky Downs Juvenile Turf Sprint in 2019. Robert Clay's Grandview went to $600,000 for Gilded Age (Medaglia d'Oro) at KEESEP, a son of Grade I-winning juvenile filly Angela Renee (Bernardini), who was purchased by Don Alberto Corp. at Fasig-Tipton November in 2015. The full-sister to MGISW sire To Honor and Serve and half to SW & GISP is from the  family of MGSW India (Hennessy), dam of Japanese dual-surface G1SW Mozu Ascot (Frankel {GB}) and of Silver Strand (Frosted), an impressive Saratoga debut winner Aug. 19. Don Alberto remains part of the ownership group. Peter Brant's Triple Elvis (Into Mischief), a $700,000 purchase by Demi O'Byrne out of last year's Fasig-Tipton Selected Yearlings Showcase, is a half-brother to multiple Grade III-winning turf router Made You Look (More Than Ready) and counts the irrepressible 11-time Grade I and Eclipse Award winner Serena's Song (Rahy) as his second dam. The supporting cast includes WinStar Farm & Siena Farm's Napa Valley (Flatter), whose cleverly named dam Mandrell (Dubawi {Ire}) is adaughter of MGISW Country Star (Empire Maker); Jay Em Ess homebred Union Lights (Union Rags), a half-brother to dual Grade I winner By The Moon (Indian Charlie) and GSP Wonderful Light (Tiz Wonderful); and $420,000 KEESEP grad Major General (Constitution). TJCIS PPs

Another 'Mischief'ous Colt Down to Debut…

7th-SAR, $100,000, Msw, 2yo, 6 1/2f, post time: 3:55 p.m. ET
The second division of the maiden lacks perhaps some of the depth of the first, but MY PRANKSTER (Into Mischief) will be well-backed to open his account at first asking. Purchased by Robert and Lawana Low for $600,000 at Fasig-Tipton last September, the bay is the second to the races for his dam My Wandy's Girl (Flower Alley), a champion in Puerto Rico who was third in the GI Gazelle S. once repatriated and added the GII Barbara Fritchie H. the following season. My Wandy's Girl is a half to the dam of MSW/MGSP Sagauro Row (Union Rags). Triumphant Road (Quality Road) is out of California MGSW turf distaffer Foxysox (GB) (Foxhound), the dam of MSW Curlin's Fox (Curlin). A $310,000 short yearling at KEEJAN in 2020, the dark bay fetched $475,000 at OBS March after breezing in :10 1/5. Reserve Currency (American Freedom) cost $40,000 at FTKSEL last year, but was hammered down to Klaravich Stables for $375,000 at Fasig-Tipton Midlantic in May (breeze), the second most-expensive of 38 of his sire(by Pulpit)'s first-crop juveniles reported as sold this year. TJCIS PPs

Best Looking For Some Headline News at Ellis…

5th-ELP, $51K, Msw, 2yo, 6f, post time: 3:42 p.m. ET
PAGE ONE (Practical Joke) cost Larry Best's OXO Equine $260,000 at KEENOV in 2019, an amount which ranks as the second-priciest among the 35 of his sire (by Into Mischief)'s first-crop weanlings sold that year. The Elm Tree Farm-bred colt is out of the stakes-placed Bailzee (Grand Slam) and is a half-brother to the promising Witsel (Nyquist), a debut winner by 13 1/4 lengths over the winter at Tampa and narrow runner-up to 'TDN Rising Star' Beau Liam (Liam's Map) in a stakes-quality first-level allowance at Saratoga July 17. TJCIS PPs

4th-DMR, $70K, Msw, 2yo, 5 1/2f, post time: 6:34 p.m. ET
RHETORIC, a $600,000 KEESEP acquisition, makes his first trip to the races for SF Racing, Starlight Racing and Madaket Stables et al, and is the first produce to race from Hard Not To Like (Hard Spun), winner of the grassy GI Diana S. at Saratoga and the GI Gamely S. on this circuit, who twice realized seven-figure prices when offered at KEENOV–$1.5 million in 2014 and $2.2 million the following year. Hard Not To Like is a half-sister to Credit River (More Than Ready), who belied odds of 41-1 to break his maiden at first asking in the Ontario Racing S. at Woodbine last September. Baoma Corp. paid $400,000 for Kamui at KEENOV in 2019 and attempted to pinhook the colt at KEESEP the following year, only to take him home when bidding stalled out at $875,000. The bay is out of a half-sister to MGSW Tequilita (Union Rags) and hails from the female family of Offlee Wild and Dynaformer. TJCIS PPs