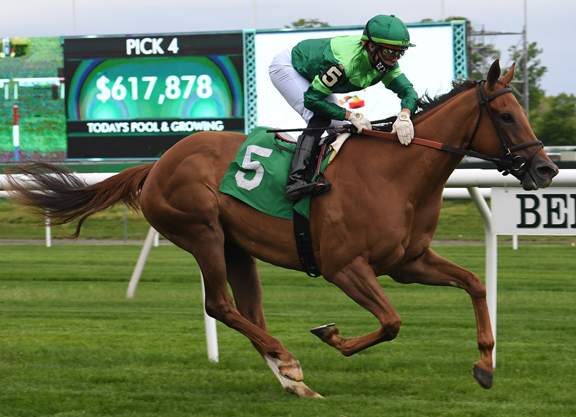 A 475,000gns Tattersalls October yearling purchase by Mike Ryan on behalf of owner Peter Brant, In Italian (GB) (Dubawi {Ire}) was bet into 7-5 favoritism for her Mar. 28 bow at Tampa, but found trouble enough at the quarter pole and again 100 yards later to cost her a debut graduation.

Kicked immediately into the lead here by Irad Ortiz, Jr., In Italian enjoyed a fairly soft time of things on the engine, clocking unpressured fractions of :24.03 and :49.39. Challenged briefly approaching the stretch, In Italian rebroke and coasted home a 3 1/2-length winner as the 5-4 chalk.

In Italian, a half-sister to Villa Carlotta (Aus) (Street Cry {Ire}), GSP-Aus; and Fasano (Aus) (Lonhro {Aus}), SP-Aus, was bred by John Camilleri's Fairway Thoroughbreds and her dam Florentina was bred back Southern Hemisphere time to Juddmonte stallion Kingman (GB) in September 2018 before returning to Australia. That produce, a colt foaled Aug. 2, 2019, sold to Tom Magnier for A$1.8m at the Magic Millions Gold Coast yearling sale this past January. Florentina returned to Banstead Manor to visit Kingman in the Northern Hemisphere autumn in 2019 and, returned to Australia, she was subsequently sold for A$650,000 at the 2020 Inglis Chairman's Sale last May. The most recent renewal of that auction took place just this past Friday, with Magnier striking the winning blow at A$2.5 million for G1SW Celebrity Queen (Aus) (Redoute's Choice {Aus}).

Florentina produced a filly last September and was bred back to 2019 The Everest winner Yes Yes Yes (Aus) (Rubick {Aus}). That foal will be inbred 4×3 to Shantha's Choice (Aus), the dam of In Italian's legendary broodmare sire, who also serves as the second dam of former 'TDN Rising Star' Rubick. Camilleri, a successful Australian businessman, has had much success breeding horses, but none more so than the irrepressible Winx (Aus) (Street Cry {Ire}).

In Italian is the 25th 'Rising Star' for her sire, a number that includes Peter Brant's Claiborne Farm-based Demarchelier (GB).