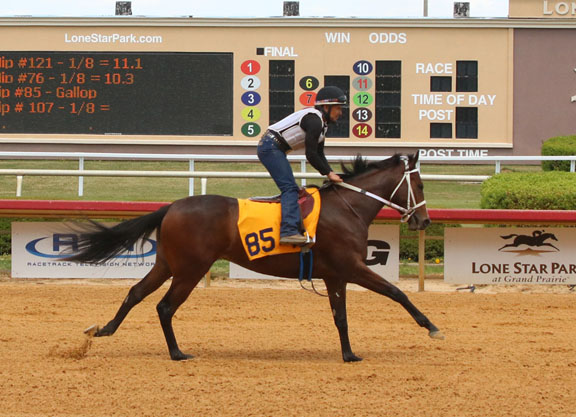 The Virginia-bred filly was one of five six-figure transactions on an afternoon during which 89 horses changed hands for gross receipts of $2,910,000. The average was $32,697 and the median was $20,000, while the buyback rate was a low 14.4%. When compared to the last TTA sale–the 2020 renewal was canceled due to the coronavirus–the average price gained 40%, with the median ahead by 33%. The average and median were the highest since the Texas Thoroughbred Association and Lone Star Park took over operation of the auction in 2016.

Sales director Tim Boyce was duly pleased with the results and gave credit to the current state of the Thoroughbred industry in Texas for contributing to the positive results.

“I had high expectations coming in and I think it exceeded my high expectations,” Boyce said. “Racing has really been revived around here, with what the governor and the legislature did. You can see where purses are and how that is affecting things. It's a good example of how it's turned into a plus for racing and the Thoroughbred scene here in Texas. Guys have more money in their pockets because they're running for bigger purses.”

He continued, “We had some really nice horses. All week these horses were looking great out there and it was getting harder and harder to pick the good ones, to figure out which horse was going to top the sale. I thought any of the six-figure horses could have topped it. I told my consignors that it was going to be a good 2-year-old sale and they stepped up and brought nice horses. [Auctioneer] Danny [Green] said it was as strong as he could remember.”

Hip 85, a half-sister to Virginia-bred stakes winner Altamura (Artie Schiller) and hailing from the family of GIII Virginia Oaks winner Volcat (After Market), was acquired by Austin Gustafson, agent, for $37,000 at last year's Keeneland September sale. She was one of two horses of the 13-strong draft presented by Asmussen Horse Center to merely gallop during Monday's under-tack show. The consignment was also responsible for hip 68, a More Than Ready colt from the stakes-placed Bonita Cat (Tale of the Cat), the hammered for $100,000. The aforementioned Gustafson signed for both horses Wednesday.

Pike Racing consigned the Louisiana-bred $150,000 joint-second toppers. The first of those through the ring was hip 36, a colt by Overanalyze out of Smittystown (Speightstown), who was successfully pinhooked after Susan Moulton paid $33,000 for the half-brother to SW Mirabeau (Bind) at last year's Texas Summer Yearling Sale. Highlander Training Center was the successful bidder for the colt, who breezed an eighth of a mile in :10 2/5. Hip 57, a $13,000 ESLAUG yearling purchase, was a bit of a talking horse after the daughter of Bind–Anne Margaret (Songandaprayer) worked the bullet furlong in :10 flat Monday at Lone Star. A half-sister to a pair of stakes-placed runners, she was hammered down to the bid of prominent owners Wayne Sanders and Larry Hirsch.