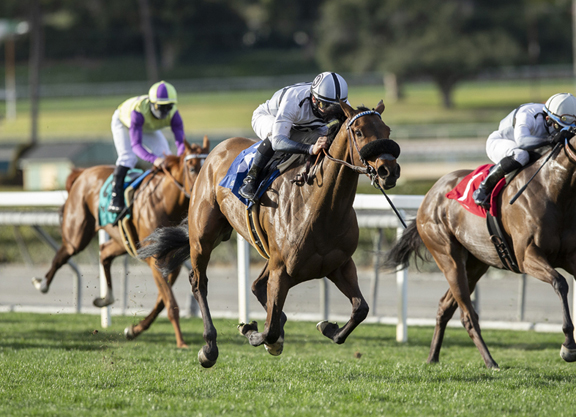 The Phil D'Amato barn continued its hot streak with European imports in turf sprints as Going Global (Ire) (Mehmas {Ire}) uncorked a powerful rally to take Sunday's GIII Sweet Life S. at Santa Anita. Fourth in her best of three turf tries for Mick Halford in her native country, the bay broke through over seven furlongs of all-weather at Dundalk Nov. 11 before being acquired privately. She was let go at 8-1 in a full and competitive field despite her trainer's excellent numbers with European acquisitions, including four wins from his last four starts in the category. Finding a foothold at the fence and off the pace as Five Pics Please (Cinco Charlie) sped clear, Going Global made her move into a :44.16 half. She still had work to do as the frontrunner threatened to complete her theft, but Flavien Prat got her out in the clear with a sixteenth to race and she zoomed home to get up in the shadow of the wire. Nimbostratus (Fr) (Wootton Bassett {GB}) filled out the trifecta for some of the same owners as the winner.

“I watched her last race and you could see she could run,” Prat offered. “Phil talked to me this morning and said they really like her. She's a little tough, likes to do things her way, but she was very professional.”

“She trained very well,” said D'Amato, who won last week's Baffle S. for the boys with Earls Rock (Ire) (Fascinating Rock {Ire}) and the Clocker's Corner S. Jan. 24 with Gregorian Chant (GB) (Gregorian {Ire}) for another partnership that includes Michael Nentwig. “We were trying to point for an allowance race for the last couple weeks and it didn't come. It was just one of those things. She trained well enough to where I thought she merited a chance in here. So, either run or wait a while until the allowance goes. Luckily, we were able to get Flavien here and a beautiful trip. I think the sky is the limit for this filly.”

D'Amato added that, with Prat telling him that she should stretch out, his team would look at upcoming two-turn stakes for Going Global.

Nentwig was on hand to celebrate the win, and said: “Any time you step out and you pay a decent amount of money for a horse from Europe that you've only seen run on tape, you kind of put yourself out there and I have to kind of convince the partners that it's the right thing to do. Phil was very confident in the filly over there. I want to thank Niall [Dalton]. Without him, we wouldn't have the filly. I'm thrilled for everyone…it's a great win for the team.”

Going Global is the second graded winner and fourth stakes winner out of a mare by Hall of Famer Invasor (Arg), who now stands in Uruguay after limited Stateside success.

The winner's dam Wrood, also conditioned by Halford, was a two-time winner over 10 panels of Lingfield Polytrack. The half to GSW Racer Forever (Rahy) has a 2-year-old colt by Profitable (Ire) and a yearling filly by U S Navy Flag.