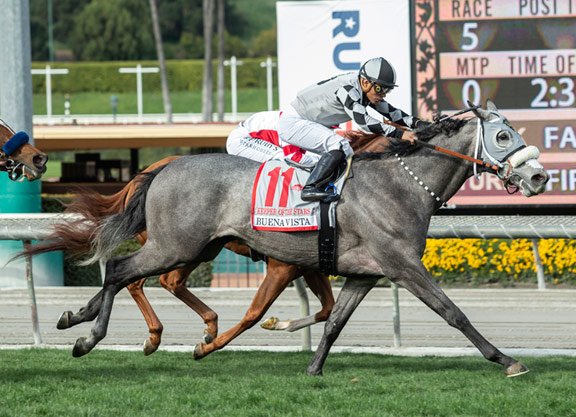 Keeper Ofthe Stars (Midnight Lute) forged past previously undefeated 3-5 favorite Jolie Olimpica (Brz) (Drosselmeyer) late to pull off a shocker in the GII Buena Vista S. at Santa Anita Saturday. Away well from the far outside post in this 11-horse affair, the 35-1 shot kept tabs from fourth as the heavy favorite cruised along on the front end, clocking early splits of :23.23 and :46.49. Ranging up two wide to tackle the pacesetter turning for home, the gray pushed past Jolie Olimpica in the final strides to spring a big upset.

“When Tom and Debi [Stull] from Tommy Town Thoroughbreds gave her to me, it felt like the best horse we have ever had,” said trainer Jonathan Wong. “We thought she would come from off the pace.  She is better when she has something to chase and when she on the outside and clear, because she has such a long stride [and] it takes her a while to get going.”

As for the beaten favorite, Hall of Fame pilot Mike Smith said, “Going from a sprint to a route today, she just didn’t relax. She was pulling and when she does that, she’s not breathing the way she needs to.”

Transferred from Jerry Hollendorfer after winning three in a row last spring at Golden Gate, Keeper Ofthe Stars was fourth in her first two starts for Wong in the GII San Clemente S. and GI Del Mar Oaks last summer. Winning a turfy allowance back at Golden Gate Sept. 20, she followed suit with a win in the GIII Autumn Miss S. over this course Oct. 26. Sixth in the GIII Red Carpet H. at Del Mar Nov. 30, the $180,000 KEESEP buy was second to the re-opposing Brill (Medaglia d’Oro) in the Lady Shamrock S. here Dec. 28 and was sixth in the local GIII Megahertz S. Jan. 20.

Pedigree Notes:
Keeper Ofthe Stars is one of 13 graded winners and 33 stakes winners for her sire Midnight Lute. Her dam Sociable produced a Verrazano colt named Valenzano in 2018 and a Classic Empire colt in 2019. The half-sister to MGISW sire The Factor (War Front) was bred back to Mor Spirit.