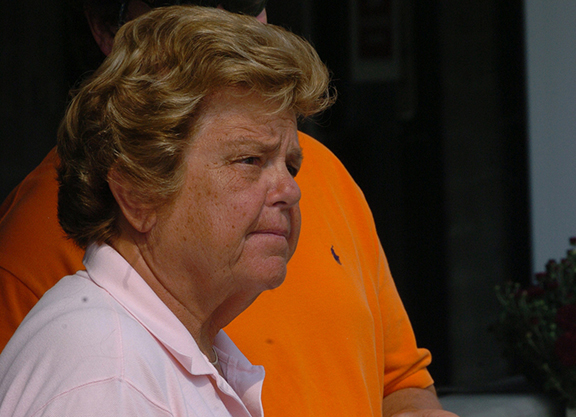 Elizabeth 'Betty' Ranney Moran, who raced the likes of 1985 GI Belmont S. winner Creme Fraiche (Rich Cream) and bred the likes of champion Unique Bella and Hard Spun, passed away peacefully at her home in Malvern, Pennsylvania, Thursday, Jan. 23. She was 89 years old.

“She was probably the most generous person I've ever met, not to just write a check, but ring a bell for the Salvation Army in downtown Philly. She was a tough, enthusiastic, hard-driving woman and we will all miss her very much,” said Eaton Sales's Reiley McDonald, who advised Moran for over 30 years.

Born Aug. 7, 1930 in Bryn Mawr, PA, Moran lost her mother Frances at a young age and she and her father moved to Brushwood Farm, then a dairy farm in Willistown Township. She loved farm life and spending time with animals of all kinds, her obituary indicated.

Moran's love affair with horses took her to events at the Radnor Hunt Club and weekend horse shows with children in tow and she later served as Radnor's chair or co-chair for better than 30 years. Her first stakes winner as a horse owner came in 1978 when Tib's Eve took the Tom Roby Steeplechase at Delaware Park. Tib's Eve was trained by Morris Dixon, who also conditioned 1945 GI Preakness S. winner Polynesian. She also won the 1989 National Hunt Cup at Radnor with Tostadero and in 2000, her 10-1 chance Papillon landed the Grand National at Aintree. Papillon was ridden by Ruby Walsh, who was making his first appearance in the legendary race.

On the flat, Brushwood came to national prominence in the 1980s, as Morning Bob (Blushing Groom {Fr}) gave the outfit its biggest victory to date in the 1984 GIII Pennsylvania Derby. In the 1985 Belmont, Creme Fraiche squared off with stablemate Stephan's Odyssey (Danzig) and got the better of that rival by a half-length, giving Hall of Fame trainer Woody Stephens the fourth of his five consecutive wins in the final leg of the Triple Crown. Creme Fraiche was purchased for $160,000 at Fasig-Tipton Kentucky July in 1983.

“It was her first trip to Fasig-Tipton,” explained McDonald. “Her sons had spotted this horse they decided they wanted, but when they stopped bidding, she jumped in. That horse became Creme Fraiche.”

“She loved watching them train,” McDonald said. “She befriended Woody Stephens, she would be out at the barn at quarter to six in the morning to soak up what was happening at the racetrack and that's were her love of the flat came from.”

Moran also tasted much success as a breeder, buyer and seller of horses at U.S. auction houses. The Brushwood-bred Russian Rhythm (Kingmambo) was trained by Sir Michael Stoute for Cheveley Park Stud to win the 2003 G1 Sagitta 1000 Guineas and G1 Coronation S., while Hard Spun (Danzig) was originally a $485,000 Keeneland September buyback before selling privately to Rick Porter's Fox Hill Farm. The GI King's Bishop S. winner and GI Kentucky Derby and GI Breeders' Cup Classic runner-up is now a leading sire at Darley. In 2011, Moran acquired 2010 GI Breeders' Cup Ladies' Classic winner Unrivaled Belle (Unbridled's Song) for $2.8 million at Keeneland November. A few weeks before the latter's daughter Unique Bella (Tapit)–a horse Moran sold for $400,000 at Keeneland September in 2015–became a 'TDN Rising Star', she was sold for a sales-topping $3.8 million back in foal to Tapit at KEENOV in 2016.

“Mrs. Moran was first and foremost a real lover of the horse and she was also an incredible sportswoman,” McDonald added. “People would ask me, 'Why is Betty selling this or that horse?', and the reality of it was that she liked the gas of the horse sales.

He added, “She had one theory: to only be involved with the best horses and best bloodlines. That's what she required from me. All the mares we bought were at the top end of the market, it was all about the females.”

Moran was passionate about things that moved her, and she was committed to supporting her community in a way that made a direct impact on people and how they lived, particularly in Chester County. She was a longtime supporter of the University of Pennsylvania School of Veterinary Medicine's New Bolton Center in Kennett Square.

Thorncroft, Home of The Sparrow, Chester County Boy Scouts, The Barn at Spring Brook Farm, Community Volunteers in Medicine, The Chester County Food Bank and many other remarkable organizations were beneficiaries of her time and her contributions.

She is survived by five of her six children, having been predeceased by her son James: Michael Moran (Anne), Frances Abbott (Franny), Elizabeth Legnini (Bob), Ranney Moran (Terri) and Caroline Moran. “Chummy” will be missed by her 15 grandchildren and 10 great-grandchildren.

Relatives and friends are invited to attend her life-celebration service on at 2 p.m. on Thursday, Jan. 30, at Saint David's Episcopal Church, 763 South Valley Forge Road, Wayne, Pa. Interment will be private.

In lieu of flowers, contributions in her name to Community Volunteers in Medicine (www.cvim.org) 300 Lawrence Dr, Ste B, West Chester, Pa. 19380 or to the Chester County Food Bank (chestercountyfoodbank.org) 650 Pennsylvania Drive, Exton, Pa. 19341, are encouraged.