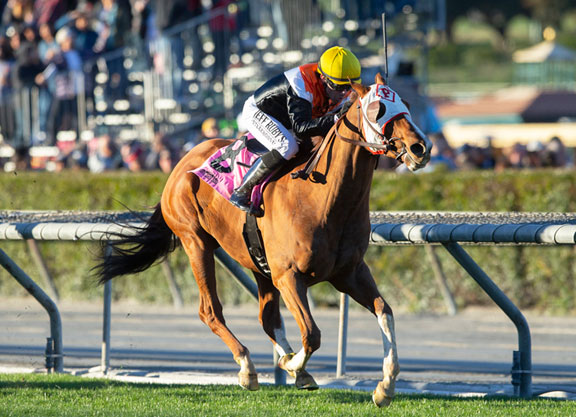 If the current state of affairs at Santa Anita is the equivalent of equine lemons, well, the team at Glen Hill Farm is happy to try to make some lemonade by sending their talented turf sprinter/miler Caribou Club (City Zip) into the G1 Al Quoz Sprint at Meydan Racecourse Mar. 30.

The relatively lightly raced 5-year-old won Laurel's Henry Clark S. over a mile last April before postion a first success at graded level in the seven-furlong GII Connaught Cup S. at Woodbine in early June. A fast-finishing third to next-out GI Breeders' Cup Turf Sprint repeater Stormy Liberal (Stormy Atlantic) in the GIII Eddie D. S. down the hill Sept. 28, he stretched out to annex Del Mar's GII Seabiscuit H. going a mile and a sixteenth Nov. 24 and most recently handled Stormy Atlantic with relative ease in the GIII Joe Hernandez S. on the cutback Jan. 1

Originally penciled in for the GI Kilroe Mile earlier this month, Caribou Club came into consideration for a race like the Al Quoz when racing was suspended and the Kilroe rescheduled for the same day as the Al Quoz.

“[Trainer] Tom [Proctor] and I were really on the fence between the Kilroe Mile and Dubai and we actually decided on the Kilroe Mile because it was Mar. 9 and we were just anxious to run the horse,” said Craig Bernick, President and Chief Operating Officer of Glen Hill Farm. “But then when all of the issues happened at Santa Anita and they pushed the race back, the Kilroe Mile became the same day as Dubai and he's probably a little better sprinting than he is going a mile. The horse can do both. But we thought the horse is doing so well, we might as well try.

He added, “I know it's a tough race, but he can go from cruising to top speed probably as fast as any horse we've ever had,” Bernick continued. “I think he'll kind of suit a straight course and we think a lot of the horse. We're really looking forward to running him.”

Joe Talamo has the riding assignment.