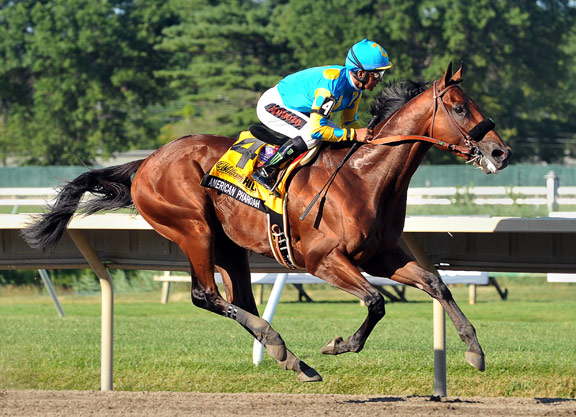 A record 44 horses qualified for automatic starting positions through the “Win and You’re In” program and 32 entrants come from overseas. Ten of the 13 Breeders’ Cup races have been oversubscribed with more than 14 entrants. A maximum of 14 starters are allowed in each race with the exception of the GI Breeders’ Cup Dirt Mile and GI Breeders’ Cup F/M Turf, which are limited to 12. Chad Brown holds the titles for the most entrants for a trainer with 14 and Coolmore leads the owners with 10 pre-entrants.

“We are very excited by the remarkable quality and depth of our international fields for this year’s World Championships, led by the top rated horse in North America with American Pharoah and the most accomplished horse in Europe this year in Golden Horn,” said Craig Fravel, Breeders’ Cup President and CEO. “With such intense interest focused on having the first Triple Crown winner to attempt a victory in the Classic against a dominant mare in Beholder and a solid group of 3-year-olds and older horses, is a race that will capture the imagination of sports fans around the world in a terrific setting at Keeneland.”

American Pharoah and Beholder lead the field of 10 signed on for the Classic, which boasts a combined 29 Grade/Group 1 victories. The Triple Crown winner, who has not raced since finishing second to fellow Classic contender Keen Ice (Curlin) in the GI Travers S. Aug. 29, faces older horses for the first time as he attempts the Grand Slam.

“Once we enter, I think the draw is very important,” trainer Bob Baffert said during a media teleconference Wednesday afternoon. “I think the draw and the trip of the race, the pace. There is some crazy things that go on in the Breeders’ Cup, as we saw last year. You just have to lead the best horse up there you can get ready. When the gates come open, it’s a tough race. They run hard from the word ‘Go.’ Right now, I feel confident that I have him to that level where he is going to run a good race.”

The Hall of Famer added, “I get him ready as much as I can and he has to do the rest of it. A lot of these horses, you just have to depend on their heart to get you that little extra bit. That’s where the horses really come in. I just hope I get one more like him in my lifetime.”

Keen Ice also enters the Classic off an eight-week layoff since the Travers and Dale Romans feels his charge has continued to improve in that time.

“Keen Ice is the type of horse that gets better with every day with training,” Romans remarked. “He is one of the few horses I’ve had that the more work you do with him, the better he gets. We saw him getting better every day since the beginning of the year, but the big leap was in the Haskell and the big leap to back it up was in the Travers. You aren’t going to see those big leaps anymore I don’t think, but you are going to see a horse that is happy with what he is doing, and has figured the game out and is mentally and physically improving daily.”

Dual Eclipse winner Beholder looks to be the first horse ever to win three different Breeders’ Cup races after taking the GI Breeders’ Cup Juvenile Fillies in 2012 and GI Breeders’ Cup Distaff in 2013. Conditioner Richard Mandella reported that she is completely back to normal and “jumping out of her hide” after spiking a slight fever yesterday and is ready to take on the boys in the Classic.

“I’ve said all along if I didn’t think she was at the top of her game, I would not try the Classic, I would go for the race that is written for her [the Distaff],” the Hall of Famer said. “I am standing here and she is going crazy for a carrot in my hand and I don’t see any signs of what we saw yesterday and I think she is going to be fine. To run in the Classic, you have to be at the best of your game. I think we are fine and I am not looking for an excuse today.”

Beholder has only run outside of California twice, finishing second in the 2013 GI Kentucky Oaks and fourth in last term’s GI Ogden Phipps S., but Mandella is not overly concerned about that being an issue.

“Any time you run in a race like this, you are concerned about everything, so it is no more [of a concern] than anything else that concerns me,” Mandella commented. “My only concern right now is to get her in the best shape I can get her for the race and what happens, happens.”

He added, “This time we brought the pony that takes her every day and the pony boy that handles him. We are trying to surround all our problems and head them off.”

With only win so far this year, Untapable (Tapit) does not come into the Breeders’ Cup off the type of stellar season she had last term, but she cannot be counted out as she attempts to defend her title in the GI Breeders’ Cup distaff. She faces a strong field of Grade I winners that includes Wedding Toast (Street Sense), Curalina (Curlin), I’m a Chatterbox (Munnings), Sheer Drama (Burning Roma) and Got Lucky (A.P. Indy).

One of the likely Distaff favorites, Wedding Toast enters on a three-win streak at Belmont, most recently capturing that venue’s GI Beldame Invitational S. Sept. 26.

“Wedding Toast is doing very well out of her race,” trainer Kiaran McLaughlin said. “She will have her final work [Thursday] morning and she is just doing great. Obviously she loves one turn at Belmont. Keeneland happens to be two turns. She has won two turns before and she has just been better this year than last year. She drifted a little bit as a 3-year-old, but now as an older filly, she doesn’t drift at all. She is hanging in great and running very well. We think she will run very well on [Breeders’ Cup] Friday.”

Also looking to defend his title is Karakontie (Jpn) (Bernstein), who will face several top European milers, as well as Tepin (Bernstein) and Grand Arch (Arch) who headline the American contingent, in the GI Breeders’ Cup Mile.

The GI Breeders’ Cup Sprint looks to be a duel between speed balls Runhappy (Super Saver) and Private Zone (Macho Uno), while Judy the Beauty (Ghostzapper) looks to return to previous form and capture her second GI Breeders’ Cup F/M Sprint. One that stands out in this loaded field set to take on last year’s champion is sophomore and fellow “TDN Rising Star” Cavorting (Bernardini), who enters off a trio of victories that includes the GI Test S.

“Cavorting had two bad races back to back in the Frizette on a sloppy track and then the Davona Dale at Gulfstream on a funny track,” McLaughlin remarked. “Since that time she has trained great and run outstanding in all three of her races. She is working weekly and she is scheduled to work [Thursday] morning and then van on Monday. She couldn’t be doing better. This will be her first time facing older fillies and there are some tough ones out there. She is doing well and we anticipate her running well.”

Bobby’s Kitten (Kitten’s Joy) hopes to get back on track and become a two-time winner of the GI Breeders’ Cup Turf Sprint, where he will face speedy “TDN Rising Star” Lady Shipman (Midshipman), Ageless (Successful Appeal) and G1SW Undrafted (Purim).

The GI Breeders’ Cup Juvenile is headlined by several Grade I winners in Nyquist (Uncle Mo), Ralis (Square Eddie), Greenpointcrusader (Bernardini) and Brody’s Cause (Giant’s Causeway). After a disappointing debut effort on the turf at Ellis Aug. 1, Brody’s Cause came charging late to earn his diploma when switched to the dirt at Churchill Sept. 11 and displayed that same late turn of foot when winning Keeneland’s GI Breeders’ Futurity S. Oct. 3.

“Brody is just a machine,” Romans enthused. “He ran a great race at Keeneland. He shows he likes the racetrack and does nothing but show me he is going to run his ‘A’ race come Breeders’ Cup. Unbridled Outlaw (Unbridled’s Song) I think is a very talented horse we have in the race also. I was so happy the selection committee decided to let him in and he will be a horse to be heard from.”