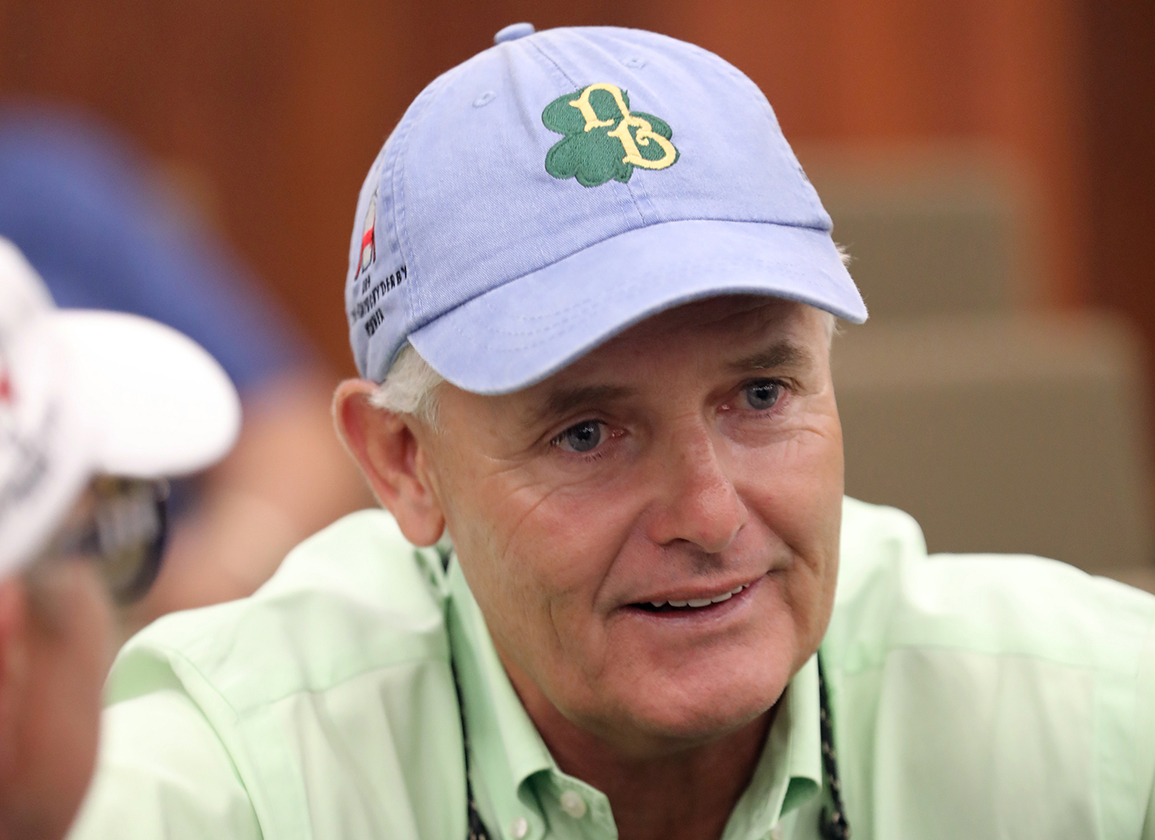 While the pause button was hit on the juvenile sales season following the Ocala Breeders’ Sales Company’s March Sale, the youngsters destined for auction rings this spring have an expanding body of works on their resumes as consignors make plans and contingency plans ahead of the delayed OBS Spring sale. The Spring sale, originally slated for Apr. 21 through 24 and now expected to run from June 9 through 12, features a catalogue of 1,231 juveniles, a handful of whom had published works at Central Florida training centers Tuesday.

Based at Golden Legacy Stables in Ocala, consignor Blas Perez has nine 2-year-olds catalogued for the Spring sale. Five turned in three-furlong works Tuesday and it was the third published work for each.

“Right now, we take every day as one step at a time because it is all very unpredictable,” Perez, a former assistant to the late J.J. Crupi and to consignor Nick de Meric, said. “I’ve got them breaking out of the gate and everything ready to go in case the sale doesn’t go. I will be able to go to the races with them.”

Perez had five horses catalogued at the March sale, with two sold, two bought back and one withdrawn. The nine catalogued for the Spring Sale will likely conclude his offerings this year.

“I tried to place all of my horses in either March or the Spring Sale, because that seems like where all the buyers are,” he explained.

Perez’s sales results were difficult even before auctions started to be canceled.

“I bought back probably one of my best horses (hip 555), I didn’t even put her through the ring because we got no action in March,” he said of the daughter of Strong Mandate. “I put her in March thinking she was my best horse. So I am hoping to see what I’ll do with her. I have a partnership, so if they don’t want to race her, I am going to have to put her in the July sale.”

In between auctions, Perez has found only modest interest from people looking to buy horses privately.

“No, unfortunately, I haven’t gotten any sold privately,” he said. “I’ve had people looking, but we are all in the same boat [as far as knowing what’s going to happen], so they haven’t come back.”

As he looks over the uncertain landscape, Perez continues to train his 2-year-olds so they will be ready for the sales or the races.

“I usually always train my horses to race more than for the sale,” Perez said. “I just push the button a little bit closer to the sale. Early in the year, I just try to put a good mind on them and get them fit, but work more on their minds than their fitness. I like to have a good foundation on them.”

“Next week, I may even go half-mile with them,” Perez said. “They are ready.”

While his juveniles continue to stretch out in their works on the farm, Perez said it was unlikely to effect how far they will work come show time at the Spring Sale’s breeze show, which are traditionally dominated by furlong and two furlong works.

Of his usual practice at the breeze shows, Perez added, “It depends on the horses. Some horses need a little more ground to get their stride and get comfortable and I would go a quarter with them. But if they are fast enough, I just go an eighth because I know they are going to gallop fast the next quarter of a mile. I think this year, the buyers will expect them to at least go a quarter mile. If you go an eighth, they are going to wonder why you’re just going an eighth this time of year.”

Niall Brennan has 45 juveniles entered in the Spring Sale. The Irishman worked two of those on behalf of clients at his Ocala farm Tuesday. Duveen (Uncle Mo) (hip 48) is bred by Joe Allen and has yet to go through a sales ring and Common Bond (The Factor) (hip 996) was purchased by Speedway Stable for $190,000 at last year’s Keeneland September sale.

“We’ve got horses working consistently,” Brennan said of the farm’s work tab. “Some horses were nominated to the sales as an option at the time and some people are now reconsidering. They are thinking, if this were a normal market and this kind of horse is on the top end, we could sell them for a lot of money, and they would do that. But now, people are readjusting. Some people, as these horses are getting closer to being ready for the races, they are probably just going to keep the horses.”

Brennan, like Perez, said his horses will be ready for either sales or races as circumstances dictate.

“Our horses have been on kind of a normal schedule, but we’ve backed up with them, developing them like they were going to the racetrack,” he said. “They are all breezing three-eighths, but they are going about every 10 days. We kind of backed up a little bit and they are breezing in pairs, whereas a lot of people going to 2-year-old sales always breeze them on their own because they breeze on their own at the sale. The sales are backed up to June and all our horses are back breezing in pairs as if they are developing mentally and physically to go to the racetrack and some will probably end up doing that.”

Even as their work tabs get longer and the sales are later in the year, Brennan said he thought it was unlikely to see a major change in distances at the breeze shows.

“Just because it’s June, you will see more [three-furlong breezes] than you would have if it was March or maybe even April,” he said. “But the 2-year-old sales are about perception. They are expected to go flat out. If they are going flat out for an eighth, they are still going three-quarters flat out, galloping out a quarter and three-eighths. They are really going three-eighths even though they are timed for one-eighth. If a very fast horse goes in :9 and change, why would you breeze them three-eighths or a half? Even if it’s June. People will still buy him because he went in :9 and change. So it doesn’t matter if they only breeze an eighth, as long as they breeze it really fast. And it won’t matter to the buyers. I know it sounds a little bit odd, but I am sure that will be the end result. You will see more quarters and three-eighths just because, but I don’t think you’ll see many less eighths just because it’s June. I think the people who think they can get away with just going an eighth because they are fast, they will.”

While purchasing horses at the track has become a competitive proposition in recent years, Brennan said that route could limit an owner’s options.

“The market gets a little tighter at the racetrack, it’s only ones that really impress with excellent numbers, whether a Beyer number or sheet number, those are the ones that are desirable and they’ll try to buy,” Brennan said. “The ones that go out there and win or finish second in a very good maiden, they are very marketable, but it’s only those ones. So you narrow down your buying base based on your performance. If you’re really trying to sell, when you go to the racetrack, you’re all in.”

With the unprecedented conditions caused by the global pandemic, consignors are realizing this is a time and situation to be open to any avenues that might yield a return on investment. And while Brennan agreed that people are keeping their options open, he feels there is still no substitute for a public auction.

“I believe there have been horses that have been sold privately at the farms in Ocala recently, or at least there are negotiations in getting vetting and such,” Brennan said. “I don’t think it’s rampant, but I think we’ve had interest. Everyone is trying to adapt to the circumstances.

He continued, “But when you really get down to the nitty-gritty, what sells 2-year-olds really well is performance. That’s what it is about, it’s athleticism and performance and ability and potential on the racetrack. And people have to see that and taste that and it’s hard to look at a video and think you’re going to give a lot of money for a client. I wouldn’t, personally. If I was buying for somebody, I would want to see that horse in person and not just a video. So I think people are doing what they can do to facilitate the situation, but at the end of the day people will want a representative, if not themselves personally, to physically set eyes on these animals. That’s why it is important to have a venue at a sales grounds where people can come and see them.”

The return of racing will have a major impact on the success of the juvenile sales, and in turn the yearling sales this fall.

“I think the key is racing starting back up, hopefully Belmont, Churchill, Laurel and the Midlantic,” Brennan said. “If they start at the end of May or first of June, that will be a big help for the 2-year-old sales. There will be buyers wanting to buy horses because now they can take them and run. They have a plan. They can go somewhere. And the smarter buyers will see it as a really good opportunity. There will be some people in the marketplace who are just going to skip buying this year and so there are going to be opportunities for the people who are buying. The market is bound to be down, you don’t have to focus on that one horse who is going to bring a big price. There are going to be a lot of horses that are going to be selling on their value, and I think the buyers who are looking at that are going to be hungry to buy some horses once racing starts up and they have a plan on where they can go.”