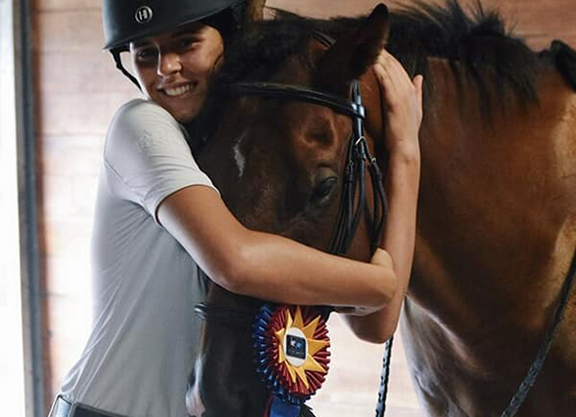 Fear That in his new career

“My experience especially in New York is that horsemen care and they have, in most cases, been fully prepared to help cover the costs of rehab. Nothing is ever going to be perfect, but we are heading in the right direction. New York racing has a lot to be proud of.”

We caught up with the very busy Lisa Molloy in East Greenbush, NY which has been the home of ReRun, a non-profit organization rehabilitating, retraining and adopted off-track Thoroughbreds for the past three years.

TAN: I remember when ReRun first started in the 1990s. How did you come to be involved with ReRun?

LM: I first met Lori Nagel one of the co-founders of ReRun when ReRun was just getting started. I was working for New Vocations and we would work events at Turfway Park. In 2012, when I left New Vocations, I started training and adopting out horses for various other programs including The Exceller Fund, Akindale and ReRun. By 2013, ReRun was having difficulties and I was notified by the board they intended to close the program. I told them I could not let that happen and I took over. I closed all but two farms, replaced the board of directors with respected industry insiders and reworked the entire organization from the ground up. Today we are one of the most successful Thoroughbred adoption and rehab programs in the country and we are the largest in New York.

TAN: You have experience with horses in many disciplines. Tell us how your background helps you to understand and connect with Thoroughbreds?

LM: I started riding at age four and started galloping National Hunt horses at 15. I had the privilege to work for J.G. Fitzgerald, who was one of the biggest and most successful National Hunt trainers in Europe. He trained Cheltenham Gold Cup hero Forgive N Forget and Minnehoma, who went on to win the Grand National. By 18, I was riding works on Androma, who won two Scottish Grand Nationals and the Whitbread.

I moved to the US at 20 with two suitcases and $400 and basically took any job I could find. I worked with AQHA World Champion cow and roping horses in MS before moving to Texas to work for Bob Perry Quarter Horses, home of the legendary Zippo Pine Bar. It was during the advent of shipped, chilled semen and embryo transfers. Joe, Jeanne and Terry Swader, who were the managers at BPQH, were my mentors and I credit them with teaching me so much from foaling mares to critical care of sick foals.

Upon returning to England, I was the assistant manager at Littleton Stud, home to two two-time Cartier Horses of the Year, Lochsong and Persian Punch. I then worked for Mary Hambro, one of the most respected people when it came to sales prep before going on to work for the Queen's racing manager, John Warren.

TAN: How did you apply your experience to your work with OTTBs?

LM: I was never very good at sports and never paid much attention at school, but I was good at riding. As a kid, I had success showing horses and especially jumpers. I worked hard, never saw my gender as hurdle, and the most important thing–I asked a lot of questions about how successful people did things and why.I took what worked for me and developed my own protocols. I created a very successful rehab program based on my experience working with some of the top horses in the world. ReRun's adoptable horses are presented in a manner that would not be out of place in the show world and would also gain the approval of the Queen's racing manager.

LM: Our piece of heaven on earth? I found the property three years ago and it is a world class, custom-built show horse facility with every amenity needed for what we do. We have 48 stalls, a 100 x 200 indoor arena, an outdoor arena, Eurocizer and 17 paddocks and fields on 21 acres. Earlier this year, local businessman Brian Hart donated the facility to ReRun, which is incredible when you think where we were at five years ago.

TAN: How has moving just outside of Saratoga helped the organization?

LM: We are ideally located at the junction of I-90 and I-87 and central to all tracks in New York. Due to our close proximity to the interstate, it is exceptionally beneficial to shippers in the winter months getting horses in and out. I also feel we are a little removed from the cluster of charities seeking funding in the county and we have a whole different revenue stream here in the Capital district. We are very accessible for visits from members of the gaming commission and other legislative bodies based in Albany.

TAN: How many Thoroughbreds are you placing annually?

LM: It's steadily grown every year–usually, we are successfully placing more than 80 horses a year.

TAN: Do you have a recent favorite story about horses you have placed?

LM: Fear That (Ice Box)–he was locally bred by Chris Shelli and trained by Nick Zito and over time, his persona caught up with his name. He retired with a bow and he was just an unhappy and sour horse. A young lady in her late teens called me and wanted to adopt him and I told her, “Nope–he's way too much for horse for you.” But she was relentless and after speaking to her father, I let her take him. This past weekend he won the green division, not only at that show but also the year-end circuit award for the green division. I am so proud of them both, especially of her. She is the epitome of what this is all about.

LM: We have a sanctuary farm in Maryland which is home to 11 horses including Breeders Cup contender Azar and Hurricane Maria survivor Toy Cannon. Here in New York, we have Saratoga Snacks, West Hills Giant and of course Most Happy Fella. While not a sanctuary program, we make every effort to care for those horses accepted into the program that ultimately are not viable for adoption.

TAN: Have you seen changes in the last 5 years in the way that the horses are coming to you?

LM: Although 70% of our intake has some form of prior injury, nice, sound, clean horses are what initially bring people to the program. As we continue to prove ourselves with our success, more sound horses are retired to us. After I left New Vocations, Nick Zito was our main and most vocal supporter and he brought a lot of owners and trainers to us. They retire horses with us in mind. Owner Jeff Treadway was also remarkable–he has stuck with ReRun through thick and thin and always donated exceptionally nice horses to the program. The moment one horse leaves, I have a horse to replace it. We also continue to take horses for Take the Lead and when possible will try to assist other programs as needed. Michael Imperio said although there are programs all over, it's tough finding programs to take injured horses or those that have the capability to take horses needing specialized rehab and that is our niche. He and his wonderful wife have been instrumental in helping get the word out to other New York owners.

TAN: Do you see a difference in the horses themselves?

LM: Horses are retiring a lot earlier then they would have 10 years ago. Overall, we are seeing fewer catastrophic injuries or if they have suffered a major injury, the connections are making efforts to get the horse surgical intervention or rehab immediately so that the horse can still go onto another career. My experience especially in New York is that horsemen care and they have in most cases been fully prepared to help cover the costs of rehab. Nothing is ever going to be perfect, but we are heading in the right direction. New York racing has a lot to be proud of.

TAN: Have industry groups like Take the Lead and TAA changed your business model at all? If so, how?

LM: Take the Lead is a godsend because the horses are evaluated at the track by a vet, they come with a stipend, and they facilitate surgeries for those requiring it. They also are part of Take2, which encourages the participation of Thoroughbreds at rated shows and that is always a good thing.

Both TCA and TAA have always been very good to ReRun and although I constantly strive to adhere to the highest possible standards, it's nice to know those standards are reviewed, appreciated and ultimately awarded with accreditation. I think it helps keep people on their toes which isn't a bad thing. When trying to be successful in anything, criticism, anger and insults are not your enemy, apathy is. Accreditation removes a great deal of that.

TAN: If you could be granted three wishes about Thoroughbred racing, what would they be?

LM: As an industry, I wish we did more to counter the negative outside influences that seek to destroy and end horse racing. Instead of ignoring them, address the misinformation which they propagate. The British racing industry has been very successful with the introduction of The Horse Comes First–I wish we had something like this: www.thehorsecomesfirst.com.

I would like to see a euthanasia fund and more efforts made to educate owners that euthanasia is not the enemy. If you cannot afford to keep your old broodmare, are unable to and cannot guarantee a safe retirement, don't give them away on Facebook or Craigslist. The hardest thing to do in many cases can be the right thing.

I would like to see a bigger levy added to the foal registration fee that ultimately goes to the TAA. Another $50 per foal would net over $1 million–that's huge for us receiving funding from the TAA

TAN: You have a fundraiser coming up. Tell us about it.

LM: We have our annual fundraiser every year on the last Tuesday of the meet. For years, we did a big cocktail party and it was hugely successful. But as with everything I do, I like to evolve and change to keep things fresh.

So, this year it's Jeans and Boots on Tuesday August 28 at 6:00 p.m. at a different venue, Saratoga National.

I have been assisted with the new format by Robin Malatino of beautiful Sugar Plum Farm. She has poured her creativity and inventiveness into this event, so it is not to be missed. We will have live music, new exciting ways to support and raise money, and chef-inspired 'smores around the fire pit. We are excited about our special guest Edgar Prado along with our host, The Beast of Belmont, NYRA's Anthony Stabile. Click here for information.

Diana Pikulski is the Editor of the Thoroughbred Adoption Network, a searchable database for all thoroughbreds available for adoption from organizations and individuals across the US and the Caribbean.