'Finley' to Beat in Ballerina 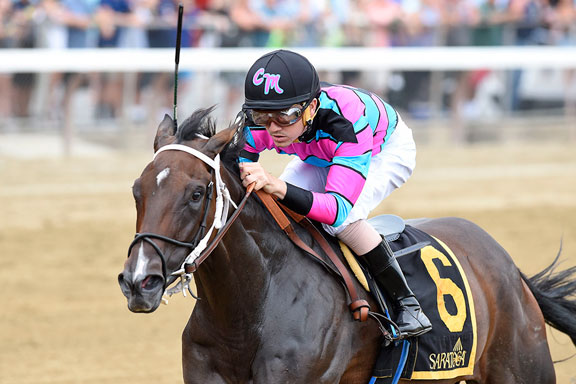 In the crowded filly and mare sprint division, Carl R. Moore's Finley'sluckycharm (Twirling Candy) will have a chance to separate herself when she goes postward as the likely favorite in Saturday's GI Ballerina S. at Saratoga.

A winner 11 times in 17 starts, the dark bay narrowly earned her first Grade I tally when scoring by a nose in the GI Madison S. Apr. 7 at Keeneland. Fading to fourth in the off-track GI Humana Distaff S. after that, she ran away in the final furlong to capture the GII Honorable Miss H. here July 25, avenging a neck loss in the same event last year.

Alpha Delta Stables' Lewis Bay (Bernardini) has only been out of the trifecta one time in 15 outings and she scored arguably her most impressive victory to date last out when cruising by 5 1/2 lengths in the GIII Bed O' Roses S. June 8 at Belmont.

Bob Baffert, who has yet to add the Ballerina trophy to his collection, ships in Cicero Farms' Marley's Freedom (Blame) with a big shot. Second in the GII Santa Monica S. this spring, the bay was transferred from Bob Hess, Jr.'s barn before airing by 7 1/4 lengths in the GIII Desert Stormer S. and earning a field-best 105 Beyer May 27 at Santa Anita. The bay followed that up with a more workmanlike success at 1-5 in the GII Great Lady M. S. July 7 at Los Alamitos.