Sly Roxy Right Back for Adirondack 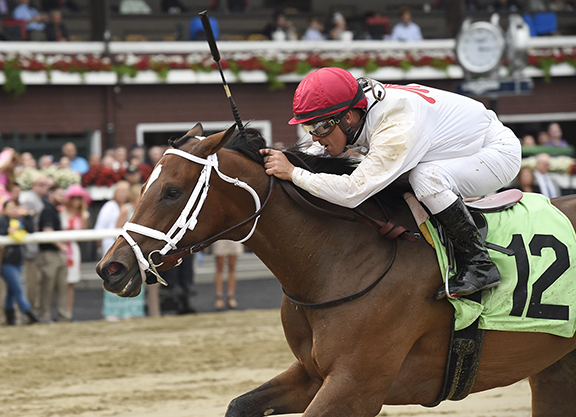 BG Stable's Sly Roxy (Speightstown) added her name to the 'TDN Rising Star'honor roll with a commanding 5 1/2-length debut score in a 5 1/2-furlong off-the-turf event here July 27, and returns to action just over two weeks later in Saturday's GII Adirondack S. going a furlong further. The bay displayed tactical speed from her outside draw, pressing the pace before drawing off from the field as her rivals sputtered over the good going. Trained by Mark Casse, Sly Roxy is the first foal out of Canadian champion older mare and female sprinter Roxy Gap (Indian Charlie).

“She's 2-for-2 so far and doing well,” Pletcher said of Pure Silver. “We were originally thinking about waiting for the Seeking the Ante [for state-breds Aug. 25], but she's training well and this looks like a relatively compact field, so we are going to take a shot at open company. She's been very good so far, very straightforward. She's a precocious 2-year-old.”

Pletcher will also be represented by Stainless (Flatter), a distant third in the opening day GIII Schuylerville S. after missing the break and spotting the field nearly ten lengths.

Sagamore Farm has a pair of entrants for the Adirondack in July 21 local maiden winner Southampton Way (Into Mischief) and first-out July 9 Laurel graduate Proportionality (Discreet Cat). The former responded well to the addition of blinkers in her recent win and posted a four-furlong drill over the Oklahoma training track in the interim, while the latter figures to be a pace factor stretching out from five furlongs.

“Southampton Way came out of her race in real good order,” said Sagamore's trainer Horacio De Paz. “She stayed here after the race, it's a quick turnaround, but she recovered after that race really good, so we'll move forward. We thought highly of her as a weanling, a very grand looking filly…[Proportionality] is doing good off of that win down there in Maryland. I think 6 1/2 furlongs is a little too far for her, probably three quarters would be her game.”