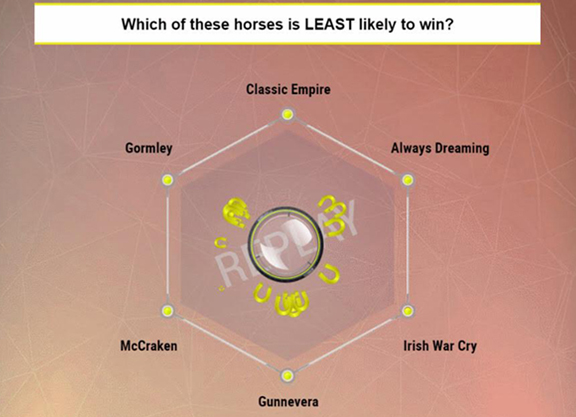 When bees are ready to form a new hive, the decision to do so and where to build, is not made by the Queen, any sort of leader or any individuals or small groups. Rather, bees do what is called a swarm. A few hundred scout bees fly here and there scouting potential locations. When they return to the colony they communicate their findings through what is called a waggle dance. The scouts essentially argue their case and the colony as a group then decides which scout to follow, forming a group decision.

It is a case of a large and diverse group working together harmoniously and productively and, ultimately, making better decisions than any that would have been made by an individual. Many minds are, in fact, better than one.

Birds do much the same thing when they fly as a flock when heading south for the winter. Schools of fish make similar group decisions and work together on behalf of the collective good.

And what exactly does this have to with horse racing and, in particular, Saturday's GI Kentucky Derby?

Plenty, if you ask scientist Louis Rosenberg, who is the founder and CEO of the Silcon Valley startup Unanimous A.I. His company believes that if humans work together in the manner that bees do, in effect creating a swarm of their own, that the group's decisions will outperform the decisions of the average individual just about every time. He has put this theory to practice in many areas, including last year's Kentucky Derby. Unanimous A.I. (“A.I” stands for Artificial Intelligence) put together a “swarm” of twenty handicappers to try to predict the outcome of last year's Derby. The end result was that the group picked the exact order of finish for the first four across the wire. Based on the superfecta price, the odds of correctly predicting the top four in order were 542-1.

“When they worked together as a swarm, they got all four horses correct,” Rosenberg said. “That's typically what we see. The swarm will usually outperform 90 percent or more of the individual participants. In this case, the swarm outperformed 100%.”

Rosenberg and Unanimous A.I. are back at it again this year. This time, the swarm was comprised of 23 expert handicappers. (Last year's 20 participants were described merely as “horse racing enthusiasts.”) This year's pros worked in conjunction with Churchill Downs and the Twin Spires ADW and Twin Spires customers will be able to play the picks made by the swarm as part of a player's pool.

Using swarm intelligence is different from other methods, like polls, to find out what groups of people are thinking. If Rosenberg and Unanimous A.I. polled 40 handicappers, they might found out that 15 like Classic Empire, 10 like Irish War Cry (Curlin) and eight believe Always Dreaming will win. That sort of method wouldn't allow the group to pull together in one direction, using their collective knowledge to come up with a unified decision. Swarming does.

Last year's swarm started by narrowing down the field of 20 to the six horses it thought had the best chance of winning. Then the real work got started, something Rosenberg describes as an exercise similar to tug of war.

The participants log on at the same time and are presented with a question. With the English Premier League, another sport Unanimous A.I. has tested its theories on, the question is simple, (e.g. Who will win today's match, Manchester United or Chelsea?). With last year's Derby, the first question was who will finish fourth (among the six horses listed as possibilities)? The questions, who will finish, third, second and first follow.

Using a graphic interface, each participant controls a magnet that pulls something that looks like a small hockey puck toward the horse they prefer. Those who liked Nyquist (Uncle Mo) would have pulled their magnet forcing the puck toward the direction of Nyquist's name. Those who preferred Exaggerator (Curlin) would work to move the puck in his direction. Those who have firm opinions about their selections can put their magnet right next to the puck. Those who have mixed feelings about a selection may keep their magnet far from the puck, exerting less force on it. If an anti-Nyquist fan really dislikes Nyquist and likes Gun Runner (Candy Ride {Arg}) and sees that the swarm might be heading toward Exaggerator they could switch their “vote” to Exaggerator as a means of blocking Nyquist as the top choice. Eventually, after all the pushing and pulling, the puck will land in some horses's corner.

It sounds like chaos, but, Rosenberg's tests have shown that it's actually a highly efficient means of making accurate predictions.

“Ultimately, the puck will find the direction the group can best agree upon and it is not always the most popular choice,” he said. “Factions of people form and dissolve until a faction forms that represents what they can best agree upon.”

While some will surely remain skeptical and call winning last year's superfecta win a fluke, Unanimous A.I. has conducted hundreds of swarms in other areas and has done so with impressive results.

• For the various proposition bets Vegas takes on the Super Bowl, the swarm got 68 percent of them right in 2017. They also polled 469 persons individually for their picks and their winning rate was 47 percent.

Rosenberg said a larger pool of participants than 20 or 25 in a swarm usually produces better results, but finds that about 100 is the perfect number. Add any more and you will generally not get superior results.

“You need to have people who are knowledgeable participating in the swarm,” Rosenberg said. “It can't be random people. It has to be people who have some knowledge and we generally use enthusiasts as opposed to professionals. Ultimately, what we find is the swarm will do better than the individuals. Even if the swarm has a bad week, and that happens…when the swarm has a bad week, the individuals by themselves will have had a worse week.”

Before you take out a second mortgage to bet the Classic Empire, McCraken, Irish War Cry, Always Dreaming straight superfecta, keep in mind that the 2016 Derby was exceptionally formful as the first four choices crossed the wire in exact order. The system is not designed to come up with longshots and wouldn't have had a prayer of picking winners like Mind That Bird (Birdstone) or Giacomo (Holy Bull), let alone the superfecta in their winning years.

Rosenberg isn't saying that his system will hit superfacta after superfecta. He is saying that his science shows that this sort of “group think” will, over the long haul, out-handicap the individuals who participate in the swarm.

“I do believe this can produce gambling profits,” Rosenberg said, pointing to the results the swarm showed on the Super Bowl prop bet and a consistent wining record it recorded on English Premier league soccer games.

Unanimous A.I. is in the process of working out an agreement with Tabcorp, which operates the betting for Australian racing, to post “swarm” selections made by their expert handicappers and to let conventional customers form their own swarm groups.

Rosenberg says he's neither a sports fan nor a gambler, but realized sporting events were a good test tube for his theories. He believes swarming amplifies the intelligence of groups and can be used for most anything that involves a collection of people coming together to form a decision. One example could be a group of doctors trying to form an opinion on the best course of treatment for a patient with an unconventional illness. Companies can use Rosenberg's methods to make important business decisions by bringing together executives as a swarm.

But first, the 2017 Kentucky Derby. Though not a horseplayer, Rosenberg did bet on the swarm's superfecta last year and will do so again on Saturday. He couldn't tell you the first thing about Classic Empire's background, his breeding, his jockey or his trainer. That doesn't matter to him. The swarm has spoken.