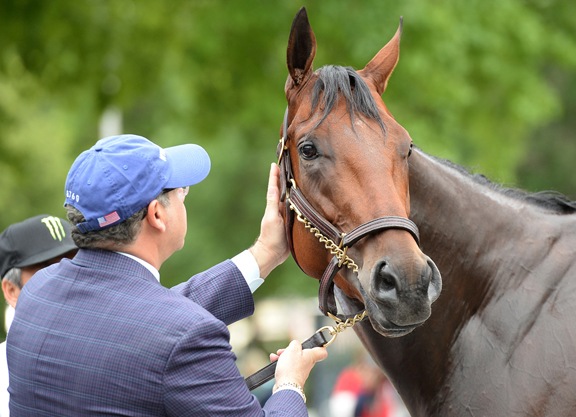 The trustee in Ahmed Zayat's personal bankruptcy case has negotiated a $1.5-million settlement to be paid by the debtor's brother, Sherif Zayat, that a court document stated will “resolve all claims and causes of action” related to the multiple mortgages on Zayat's home.

The motion for approval of that settlement, if so ordered by a judge in a New Jersey federal bankruptcy court July 6, doesn't mean the end to the complicated, now 21-month-long Chapter 7 petition by the allegedly insolvent former Thoroughbred owner and breeder.

But it does mean some of that $1.5 million might trickle down to creditors once the case gets fully settled.

As an attorney for trustee Donald Biase put it in his June 6 court filing, the settlement will “provide a benefit for the Debtor's estate, which was otherwise uncertain.”

The $19-million debt question for Thoroughbred trainers, horse farms, bloodstock businesses, veterinarians, and equine transportation companies who are among the 132 entities listed as non-secured creditors still hasn't changed much.

That's because the money owed to them is in the form of “non-priority unsecured claims,” which puts those people and businesses far down in the pecking order for repayment of Zayat's debts.

Under Chapter 7 bankruptcy laws, non-priority unsecured claims are at the bottom of the hierarchy to get paid–if they get paid at all–once a trustee liquidates assets and discharge debts. They get ranked behind “secured” loans in which property is pledged as collateral, like with liens and mortgages.

However, the same document stated that three of those mortgages–which were made by friends and family members and not lending institutions or banks–would be considered by the trustee as “avoidable transfers,” which means that they can be canceled and the proceeds returned to the estate for distribution to creditors. Avoidable transfers can also lead to fraud charges.

One of those property-secured loans that Biase wrote was “avoidable” was for $500,000 from the Egypt-based Sherif Zayat.

That loan was recorded as a mortgage with a New Jersey county clerk Sept. 2, 2020–six days before Ahmed Zayat filed for Chapter 7 bankruptcy protection while claiming that he had only $300 in cash and $14.22 in two checking accounts.

On September 14, 2020, an involuntary bankruptcy petition was initiated against Zayat's family racing business, Zayat Stables, LLC. That case is separate from this personal bankruptcy case, although many of the racing-related creditors overlap in both cases.

In a riches-to-rags case brimming with fraud allegations since its onset, Biase's filing stated that he has attempted to trace the tangled web of Zayat family finances via the “issuance of numerous Rule 2004 Subpoenas, reviewing thousands of pages of documents, including bank statements and tax returns, and conducting Rule 2004 depositions and extensive motion practice, including numerous motions to obtain access to the Debtor's real property, and the contents of same, by my appraisers.”

Beyond not having his Chapter 7 bankruptcy protection granted by the court if he isn't being truthful, Zayat faces a possible federal investigation and/or charges if the U.S. Department of Justice believes crimes have been committed.

Biase has repeatedly claimed the Zayat and his family have hindered his investigation with evasive tactics and non-compliance.

Zayat has consistently denied that he has engaged in any illegal activity or that he is hiding money. He has also insisted that neither he nor his family members are trying to obstruct the work of either of the trustees who are assigned to vet his personal finances and business operations.

The June 6 filing revealed one new nugget about Ahmed Zayat that had not been previously contended: “The Debtor has an ownership interest in a farm located in Egypt,” the Biase filing stated.

If true, it is unclear whether that alleged property interest could be also attached as an asset to pay creditors. The filing did not elaborate either way.

The settlement document, which was signed by all parties May 26, stated that “the Debtor, the Zayat Parties, and Sherif, and any entity they have an interest in shall waive any claim against the Debtor's estate [and] the Parties shall have released each other from any and all claims and causes of action and the Trustee shall be deemed to have abandoned the Debtor's estate's interest in the NJ Property pursuant to Section 554 of the Bankruptcy Code.”

Biase's filing stated that this type of settlement was preferable to continuing to fight the matter in court and/or by forcing a sale of the real estate.

“Though the Trustee believes that he would likely prevail on the claims against the Debtor, the Zayat Parties, and Sherif, the Trustee wishes to settle the claims, in order to save the Debtor's estate time and money that would otherwise be spent on litigation of the claims,” the filing stated.

“With respect to the NJ Property, even if the Trustee could obtain an offer of $4.8 million and avoid [the three mortgages with individuals] after deducting the first and second mortgages totaling $3.4 million and the broker's commission of $240,000, there would be non-exempt net equity in the approximate amount of $580,000…” the filing stated.

“This amount also does not include the Debtor's potential homestead exemption, the cost and time to seek approval under [the] Bankruptcy Code to sell the NJ Property, and the time and cost to avoid the [individual mortgages],” the filing stated.

“The Settlement Amount of $1.5 million greatly exceeds the potential non-exempt equity in the NJ Property,” the filing summed up.