The Weekly Wrap: A Classic Collaboration 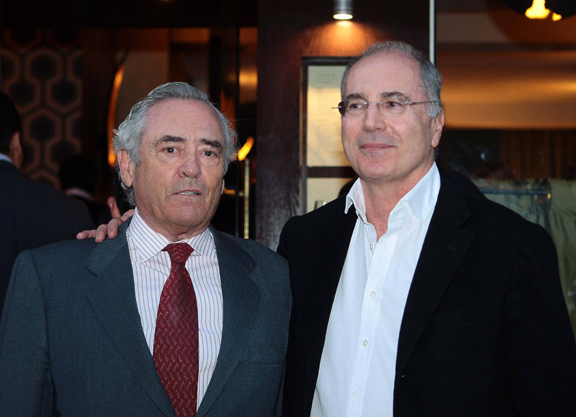 We’ve become accustomed to seeing the powerful partnership of Messrs Magnier, Tabor and Smith carrying off Group 1 trophies but the Coolmore triumvirate has a strong rival in the Classic department from Gérard Augustin-Normand and Antonio Caro, who have enjoyed extraordinary success in France in recent years.

As a sole owner, Augustin-Normand’s Classic dream started with Le Havre (Ire) (Noverre) whose 2009 win in the Prix du Jockey Club sparked a dramatic expansion in the Thoroughbred operation of the man whose ownership interests up until then had been primarily in trotters. An offer from a Japanese stud was rebuffed and Le Havre retired to what was then Haras de la Cauvinière (now Haras de Montfort & Préaux), with his owner dispatching Sylvain Vidal to the sales to recruit a broodmare band to support him. This he did with notable results.

Avenir Certain (Fr) and La Cressonniere (Fr), members of Le Havre’s first and third crops respectively and trained like their sire by Jean-Claude Rouget, each pulled off the Poule d’Essai des Pouliches/Prix de Diane double for the Augustin-Normand/Caro partnership.

In 2016, when La Cressonniere was in her pomp, Almanzor (Fr), a first-crop son of Wootton Bassett (GB), also gave the owners the Prix du Jockey Club before clinching the G1 Champion S. in both Ireland and England.

The following year Augustin-Normand struck again, this time initially in partnership with Vidal, their support of another of their young stallions, Rajsaman (Fr), being rewarded with a Poule d’Essai des Poulains/Jockey Club double for his son Brametot (Ire). This €26,000 foal purchase was part-sold to Al Shaqab Racing just before his Classic victories.

And we now see the rise of Olmedo (Fr)—yet another colt by a first-season sire, in this case Coolmore’s Declaration Of War—who is being pointed at the Jockey Club after narrowly gaining the verdict in the return of the Poulains to ParisLongchamp in what can only be described as controversial circumstances.

ParisLongchamp Palaver
It’s rare enough to have two Classics as consecutive races on the same day; rarer still to have the two interspersed by a jockeys’ protest and demands for the second race to be run on a different part of the track after U S Navy Flag slipped in the Poule d’Essai des Poulains, run on the middle track. This is the situation in which the stewards at ParisLongchamp found themselves on Sunday amid growing concerns over the state of ground at France’s premier racecourse.

The chief protestor over the last ten days has been Christophe Soumillon, who won the listed Prix de la Seine aboard Shahnaza (Fr) the previous Sunday and then refused to take up his later rides on the card, describing the ground as “terrible”. Shahnaza’s trainer Alain De Royer Dupre later withdrew Dolianova (Fr), one of Soumillon’s mounts for the day’s second listed contest.

In a separate incident at Lyon-Parilly on Thursday, four horses fell during that day’s Quinté handicap and racing was subsequently abandoned, but not in response to earlier criticism about track conditions from the riders engaged that day. The horses involved suffered no serious injuries but jockeys Ronan Thomas and Theo Bachelot were taken to hospital, with the latter missing out on victory in Sunday’s G3 Prix de Saint-Georges aboard City Light (Fr) as a consequence.

Emotions are understandably running high in the weighing-room, leading to a highly-charged, televised outburst from Soumillon ahead of the Poule d’Essai des Pouliches. His determined request, backed up by a number of his colleagues, was finally granted by Longchamp’s raceday committee after consultation with the trainers involved in the race and the fillies’ Classic was moved to the outer track, which was more recently the course upon which both Poules were run prior to Longchamp’s closure two years ago.

Though some trainers, including Freddy Head, have been supportive of ParisLongchamp, there appears to be general feeling that insufficient care for the turf during the two-year hiatus, along with prolonged wet weather causing the first batch of meetings at ParisLongchamp to be run on heavy going, have led to undesirable conditions underfoot.

On Monday, France Galop issued a statement announcing that the forthcoming meetings on May 17 and 24 will also be switched to the ‘grande piste’ or outer track as a “precautionary measure following the incident in the Poule d’Essai des Poulains”.

Soumillon took to social media, stating, along with photographs of the track where U S Navy Flag was seen to lose his footing, “I’m not here to put oil on the fire, I’m trying to extinguish it, but let’s be brave and all tell the truth. Yesterday U S Navy Flag slipped.”

Swiss Kissed With Success
Track conerns aside, it was quite a day for Gestüt Zur Küste, the Swiss-based operation run by Christoph Müller which was responsible for breeding both the winner of the Poule d’Essai des Pouliches, Teppal (Fr), and Dice Roll (Fr), who was beaten only a neck and a head when third in the Poulains.

The filly and the colt are further linked by the fact that they are the offspring of the Juddmonte-bred half-brothers Camacho (GB) and Showcasing (GB).

Müller, the chairman of Frauenfeld racecourse to the east of Zurich, explained, “The partners have about 30 mares, some boarding at Haras d’Ellon and some at Haras d’Etreham. The majority are owned solely but some are in partnerships with the Chambure family and with Thierry de La Heronniere. We’ve been doing this now for four years so these 3-year-olds are our first crop, which is amazing.”

With his voice croaking after plenty of shouting at Longchamp on Sunday, he continued, “If you’d told me when we started that we’d have two runners in the Poule d’Essai I would have said it was impossible. It’s even more incredible that the two horses are by half-brothers. Generally we use speed more than stamina and the two stallions were quite inexpensive when we used them.”

“We are a Swiss operation but we breed mostly in France and also send mares to Britain and Ireland,” he added. “It’s a thrill to see our name high up in the breeders’ list in France. It is a real team operation and our success has been helped by our involvement with two good studs in France. Crispin de Moubray is an advisor and we all share our ideas and our experience.”

Gestüt Zur Küste has a young full-brother to Dice Roll on the ground alongside his dam Schlague (Pulpit), who also has a yearling filly by Elusive City (Ire). Teppal’s dam Jumanna (Fr) (Cadeaux Genereux {GB}) has a yearling colt by Showcasing and recently foaled another colt by Ajaya (GB).

Royal Date For Royal Julius
Olmedo may not be Royal Ascot-bound but it seems the likely destination for Royal Julius (Ire) (Royal Applause {GB}), who last season became the first black-type winner for his young Marseille-based trainer Jerome Reynier. On Sunday, the 5-year-old entire lifted him higher still with victory in the G2 Presidente della Repubblica in Rome and the G1 Prince of Wales’s S. is now in his sights.

Having driven the horsebox to and from Rome, the slightly weary but happy trainer told TDN on Monday morning, “I’m sure he’ll be even better this year. Mentally he’s much stronger than last year and he feels stronger physically as well.”

Royal Julius made his seasonal debut on the opening day of the new ParisLongchamp, finishing second to Air Pilot (GB) in the G2 Prix d’Harcourt, a performance which gave Reynier a boost.

He continued, “I know he was a long shot in the Prix d’Harcourt but he came on a lot from his run there and I was very confident that I didn’t have to keep him to listed races. It’s a dream for me to have a horse to send to Ascot and it’s a race I’ve watched since I was very young. It would be special to go there with a bit of a chance.

“Gérald Mossé felt there was still something left in the tank yesterday. He really liked the horse and is looking forward to riding him at Ascot. We now know that he can go on any ground—it was heavy at Longchamp and much faster yesterday, he nearly broke the track record.”

With a rising profile that was outlined last year in a TDN feature, Reynier has resisted the temptation which has often proved irresistible to fellow trainers in a similar position in not allowing his stable to become too big too soon.

“I have 40 boxes and 40 horses. I’m always full and I don’t want 41,” he said. “I just want to focus on my 40 and on quality over quantity. We have had 15 wins already this year and have horses at every level but we try to be as competitive as we can with a really good bunch of owners.

“We had a winner in Longchamp [Ascot Spirit (GB)] one hour after the Rome win so it was very special also to have a winner in Paris on Guineas day.”

Stars In The Making
One of the biggest threats to the supremacy of Galileo (Ire) this season could come from his half-brother Sea The Stars (Ire), who looks to have some decent representatives both in the 3-year-old division and among his older runners.

Harry Dunlop has a chance to follow in the footsteps of his Epsom Classic-winning father John and brother Ed after the front-running victory of Knight To Behold (Ire) in Saturday’s G3 Lingfield Derby Trial, while Lady Bamford’s homebred Stream Of Stars (GB) was an impressive recent maiden winner and holds a Royal Ascot entry for the G2 Queen’s Vase. This was the race in which subsequent G1 Goodwood Cup winner Stradivarius (Ire) first showed his mettle and he looks likely to head to York on Friday for the G2 Yorkshire Cup. Victory would qualify Bjorn Nielsen’s colt for a tilt at the Weatherbys Hamilton Stayers’ Million.

Sea The Stars could also be represented at York this week by Derby entry Al Muffrih (Ire) in the G2 Dante S., while recent G3 Gordon Richards S. winner Crystal Ocean (GB) is being aimed at the G1 Tattersalls Gold Cup on May 27. Cloth Of Stars (Ire) is another with the talent to bag a big race this season providing his exuberance can be contained.

Sea The Stars is not a sire one would readily associate with breeze-up sales but his sole filly at Arqana on Saturday sold for €400,000 to American owner-breeder Andrew Rosen.

Perfect Two For v.2
It wasn’t all plain sailing at the Arqana breeze-up this year, though the sale fared better than most in the division. Whatever adjustments are made to next year’s breeze—a return to Saint-Cloud perhaps or a reduction in the number catalogued—one sale which received a mighty shot in the arm on Sunday was Arqana’s newest yearling auction, the v.2, which takes place immediately following its flagship August Yearling Sale.

This one-day sale aimed at more precocious types appears to have found its niche, and both Sunday’s Classic winners at Longchamp, Olmedo and Teppal, graduated from the 2016 catalogue.

Haras des Capucines consigned Olmedo, who was bought by his trainer for €100,000. Teppal, a €60,000 yearling from Haras d’Ellon, was sold on the following year from the Bansha House Stud draft at Arqana and follows The Grey Gatsby (Ire) as the second Classic winner to emerge from the French breeze-up.

Con Marnane had a rare look of concern on his face during Saturday’s sale but that quickly turned to his more familiar beam after Teppal’s victory the following day. Should the Marnanes’ recent juvenile winner On A Session (Noble Mission {GB}) emulate Different League (Fr) (Dabirism {Fr}) by winning at Royal Ascot this year that smile will become wider still—and a session will definitely be on.