The Rise of Reynier 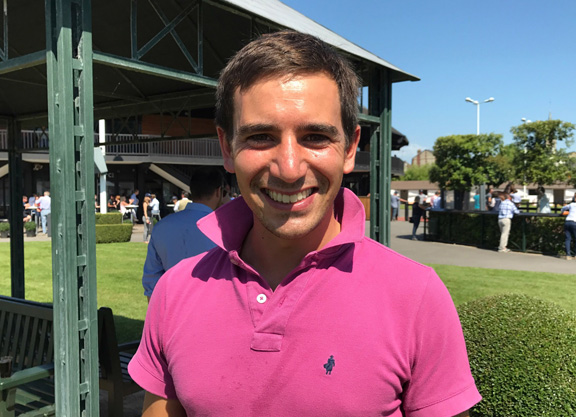 Jerome Reynier, a trainer on the up | Emma Berry

Among other bloodstock-related vocations, the Darley Flying Start (now Godolphin Flying Start) has already delivered a number of trainers, with Chantilly-based Francis Graffard, a graduate of the inaugural course, being perhaps the most prominent example.

His fellow Frenchman Jerome Reynier joined the programme several years after Graffard and his contemporaries had graduated and, after a false start as a bloodstock agent, set about becoming a trainer. His was not the most conventional approach to this position: apart from short stints with Neil Drysdale in America and Bruce Harvey in New Zealand while on the Flying Start course, he has never worked under another trainer and, intriguingly, he has set up his stall far from the madding crowds of Chantilly or Pau in the south-east French training centre of Calas, between Marseille and Aix-en-Provence.

Despite this geographical separation, the 32-year-old is quickly ascending the French training ranks and sent out his first Listed winner at the weekend when Royal Julius (Ire) (Royal Applause {GB}) won the Grand Prix Anjou Bretagne at Nantes. If you haven't heard Reynier's name before now, you're sure to hear plenty more about him in the not-too-distant future.

“My dad was an architect but the thoroughbred industry was his passion,” he says of his introduction to the world in which he'd eventually make his living. “He started with one yearling and won a really good race in the south of France, then he bought a 10-year-old barren mare and he sent her to Bordeaux for a special mating because he thought the nick would work well. That was the first foal he ever bred.”

That foal, by the obscure provincial stallion American Stress (Sham), was named Shaindy (Fr) and grew up to beat Common Grounds (GB) in the Prix Djebel. Reynier junior was hooked.

“I started to read pedigrees and get really interested when I was 12 but I had to finish my scholarship. Once I got my baccalaureate I started travelling so I could learn English,” he says.

As well as English, which he speaks perfectly, he learned plenty about the breeding business. “I started going to every sales complex and did some yearling prep and one breeding season with Coolmore in 2005.”

From Coolmore, he enrolled on the Irish National Stud course, where he met Sam Hoskins, whose ownership exploits include setting up the Hot To Trot Racing syndicate which recently struck gold with a Group 2 winner at Royal Ascot. The Englishman has supported Reynier from the start, sending him his first horse from overseas, the homebred multiple winner Lily Carstairs (GB) (Orpen).

“While I was trying to be a bloodstock agent, I missed the physical contact with the horses. Because I only worked for trainers abroad and not in France I couldn't get my trainer's licence immediately but I ended up being employed as a private trainer for Ecurie Camacho Courses in the south-east,” Reynier explains. “I trained solely for them as a salaried trainer and it was great experience. We had 38 winners and earned €800,000 in prize-money in two years so France Galop were happy to give me a public licence after that.”

Despite having proved himself adept at training and placing horses for his erstwhile employer, Reynier had to start all over again in his new venture which was launched in March 2013, with four horses in his stable.

“I had two of my own, and Sam sent me Lily Carstairs,” he recalls. “I worked for Gilles and Aliette Forien of Haras de Monatigu when I was young and they have supported me from the start, as has Hubert Honoré. They gave me a great chance and I won a couple of races for them and that was really the start of having nicer horses–it was really important for me and I am very grateful.”

With around 40 horses now under his care and a career-best tally of 56 winners last season, Reynier has exploited the opportunities at local provincial tracks in the south of France to set a consistently good strike-rate.

He continued, “That was always my aim–to race horses where they have a good chance. I think it's good to be based in Marseille. There are plenty of opportunities to race horses in the south and if they are good enough to go to Paris we can take them up there easily. I also take some stables in Deauville in the summer.”

Reynier's burgeoning list of international owners also includes a rising number of British names, including James Read, Colin Bryce, Matt Coleman, Jocelyn Targett, Nathaniel Barnett and David Spratt. Marseille is not exactly on the doorstep for those making the cross-Channel trip from England to France, but the trainer has no immediate plans to relocate from the region in which he grew up.

“I've started with absolutely nothing. I had four horses and not much money in my account,” he says. “So it wasn't easy to say I'm going to Chantilly to try to make it there–you need some money to buy a place in Chantilly.”

“It was more logical for me to start in the place I knew, and it was much easier on the competition front,” he said. “In the long term, I don't know if I will move to Paris but I am quite happy with how things are at the moment.”

He also has no desire to increase his numbers dramatically at present. “I'm not someone who likes to take risks. I don't want to get myself into trouble financially–I have a fixed team of people I need to pay each month. That's why I started quietly and why I don't take too many legs in horses myself. If I have the opportunity to go up to 50 horses, why not, but I'm very happy to go along the way I am. If I have 10 or 12 juveniles coming in each year it's enough to keep going. It's maybe not enough to find a pearl, but I can keep the stable running.”

With Al Shaqab Racing and Gerard Augustin-Normand on the current list of Reynier patrons, keeping a check on numbers might be the trainer's biggest problem yet, and he's bound to be able to continue to count on the support of the enthusiastic Hoskins.

“Sam and I had a great year when we won 13 races with only two horses, Kyllarney (GB) and Double Power (Fr). They were both really cheap buys but Sam has a very good eye–he's a compulsive buyer at horses-in-training sales.”

Reynier nominates the Hubert Honoré homebred juvenile Chipolata (Fr) (Muthathir {GB}) as a filly to follow, and we won't have to wait too long to see her in action, as she returns to Marseille Pont de Vivaux on Thursday in a bid to follow up her maiden victory at the course last month. With 25 winners on the board already for 2017, Reynier's previous best of 56 could well rise yet, in line with his reputation as one of the country's most astute young trainers.