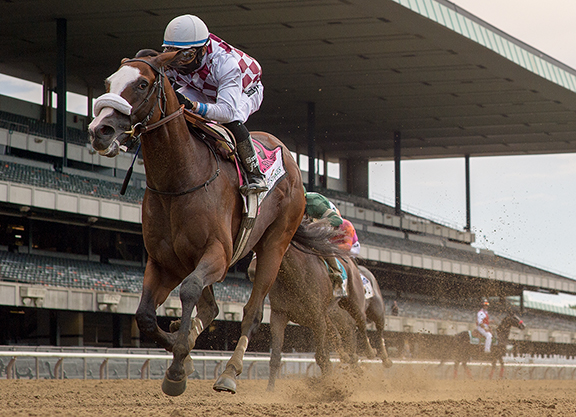 Did you notice that Mishriff (Ire) (Make Believe {GB}), the big Saudi Cup winner on Saturday, is a member of his sire's first crop?

A 4-year-old homebred for Prince A. A. Faisal's Nawara Stud, Mishriff is by the Faisal-raced Make Believe, a Dubawi (Ire)-line stallion at Ballylinch Stud in Ireland. Last year, Mishriff won the G1 Prix du Jockey-Club, the French Derby equivalent, and is one of three first-crop winners of that Classic in the last five years, along with Brametot (Ire) (Rajsaman {Fr}) in 2017 and Almanzor (Fr) (Wootton Bassett {GB}) in 2016. In between these first-crop colts were winners by proven sires: Sottsass (Fr), by Siyouni (Fr), in 2019, and Study of Man (Ire), by Deep Impact (Jpn), in 2018.

Last year in the U.S., two of the three Classics fell to first-crop runners: Gl Belmont S. winner Tiz the Law by Constitution; and Gl Preakness S. winner Swiss Skydiver is by Daredevil.

First-crop Classic success isn't a fluke, at least in recent times, and here's why: first-year stallions are the most popular horses at stud outside of elite proven sires and there's competition to get to them, which means that breeders will nominate some their best mares to them to secure spots. And stud managers, flooded with applications, are more discriminating in accepting these mares to their books than at any other times in these horses' careers, except for if they become elite proven sires after five-plus crops. It's the reason first-season sires, along with the best elite proven sires, frequently have large books.

Because, pound for pound, these stallions frequently get their best mares in their first crops–whether by pedigree, race record, physique, or a combination thereof–they tend to have more successes with this crop than others, especially if they are any kind of horse. I wrote of this here on July 12, 2019, in “First Crops of Sires Are Potent,” noting that of the top 20 active leading sires of 2018 by earnings standing in N. America, “almost half (nine, or 45%) of these 20 stallions' first crops have been their best to date by percentage of black-type winners to named foals.”

The accompanying chart listing the winners (and their sires) of each of the three U.S. Classics over the past 20 years, 2001 to 2020, adds some heft to this line of thought. There were 48 individual horses that accounted for these 60 races, and they were sired by 39 unique sires (Maria's Mon, Distorted Humor, A.P. Indy, Smart Strike, Birdstone, Awesome Again, and Curlin sired two each, and Tapit sired three). Eleven of these 39 stallions, or 28%–Daredevil, Constitution, Bodemeister, Maclean's Music, Uncle Mo, Curlin, Birdstone, Medaglia d'Oro, Street Cry (Ire), Distorted Humor, and Maria's Mon–were represented by first-crop Classic winners, with Birdstone astonishingly represented by two, Gl Kentucky Derby winner Mind That Bird and Belmont S. winner Summer Bird in 2009. If you add the seven Classic winners from second crops to this total, then 18 of 39 sires, or 46%, were successful. These are big numbers for unproven horses, and it helps to explain in part why first-crop yearlings–and some from second crops–are in demand at the sales.

Keep in mind that we're only looking at first-crop Grade I Classic successes in this chart, but if you consider other races, you'll find significant examples of similar success. Take 3-year-old Pink Kamehameha (Jpn), the Japanese-trained winner of the Saudi Derby, who is from the first crop of his sire Leontes (Jpn), just as last season's champion 2-year-old filly Vequist is a member of her sire Nyquist's first crop and recent 4-year-old Japanese Group 1 winner Cafe Pharoah is one of three top-level first-crop winners for American Pharoah, and so on.

To better process first-crop success, first understand that commercial breeders now dominate the industry, particularly in Kentucky. Note from the chart that 32 of the 48 Classic winners, or 67%, went through the sales ring, and this figure includes homebred winners American Pharoah, Union Rags, and Animal Kingdom. Even counting these three in both categories, there were only 17 homebred Classic winners from 48, or 35%. War Emblem was a homebred sold privately before the Classics, and Funny Cide, a $22,000 yearling, was sold privately before he raced.

Contrast this to 50 years ago over the 20-year period of 1951 to 1970 when 30 of 49 Classic winners, or 61%, were homebreds, with only one these, Northern Dancer, offered for sale at auction, at E.P. Taylor's annual yearling sale. During this time frame, only 17, or 35%, went through a ring. It's not an urban legend that there's been a significant shift to the commercial marketplace from breeding to race, and these numbers illustrate this, inter alia, as lawyers would say.

The savviest of commercial breeders primarily tend to patronize two types of stallions: first-year horses (and to a lesser extent, some second-year sires) and proven stallions with more than five crops. Homebreeders who race their stock are more likely to mostly use proven horses (unless they had something to do with an unproven horse, as Prince Faisal did with Mishriff's sire), and this is illustrated well in the chart. When first-crop stallions weren't involved, most of the Classic winners were by proven sires, such as Lookin At Lucky, War Front, Awesome Again, Scat Daddy, Tapit, Curlin, Malibu Moon, Dixie Union, Smart Strike, A.P. Indy, Dynaformer, etc., for commercial and homebreeders alike. But note that of the 17 homebred Classic winners, only two–Street Sense and Summer Bird–were by first-year sires.

Commercial breeders prefer first-year sires because there's less downside risk selling their yearlings compared to second-, third-, fourth-, and fifth-year stallions. For example, as I've written here previously, a second-crop yearling will come to market when the sire's first crop is two, and if those first 2-year-olds fail to perform by sales time, the second-crop yearlings will get punished in the ring. Likewise, a breeder bringing a third-crop yearling to the sale will have to contend with the success or failure of the sire's 3-year-olds and 2-year-olds, and so on. For most commercial breeders, this is a level of risk they are not willing to assume, because what they breed is designated for the sales ring and a healthy return on investment with minimum risk is paramount to their survival.

It's for this reason that stallions specifically in their third, fourth, and fifth years at stud see their patronage drop. There's also a commensurate drop in the quality of their mares, too, and stud managers, instead of being picky about who gets in, actively solicit mares and are all open arms to anyone that can pay the fee–which is usually significantly reduced by this time from when the horse first entered stud.

Homebreeders, however, aren't averse to using stallions in their third, fourth, and fifth years at stud – Birdstone (4th crop), California Chrome (4th crop), and Country House (5th crop)–because selling isn't their priority. However, because their numbers have decreased through the years as noted, so, too, has patronage for these horses.

And because commercial breeders now dominate the business and control many of the best mares at each stud-fee range, first-crop runners (and some from second crops) should continue to do well, in line with the trends we're seeing.