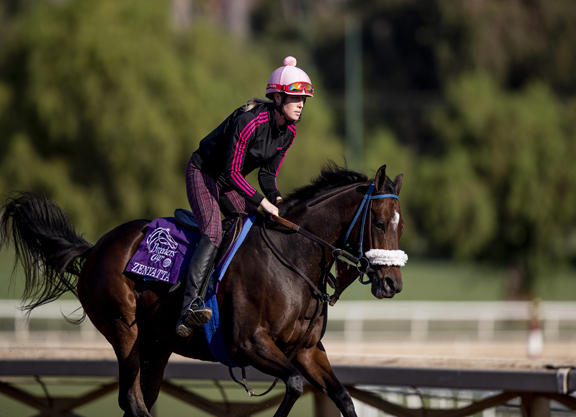 Zenyatta is still looking for her first win as a broodmare but that may soon change. Trainer John Shirreffs reports that her third foal to make it to the racetrack, Zellda (Medaglia d'Oro), has impressed him so far and appears to have a bright future.

“We're really excited about Zellda,” Shirreffs said. “She looks really good. She is on the smaller side but she has a really big stride and she's really into it. Some horses just gallop around and they just aren't into it. She is really into it. That is a plus. As always, it comes down to speed and we won't really know that until she breezes.”

XBTV captured Zellda galloping on Oct. 27 and the video shows a horse who is clearly playful and likes to buck. Some may see that as evidence of a horse that doesn't have its mind on business, but Shirreffs said that isn't at all the case.

“She reminds me a lot of Zenyatta when she was a 2-year-old,” the trainer said. “One of the things I don't think very many people know about Zenyatta is that as a 2-year-old nobody wanted to ride her because she would go in a full gallop and then jump in the air and fire with both hind legs and launch her riders. Zellda can do the same thing but she's not quite as big and strong as Zenyatta was. She hasn't launched any riders but she has that same kind of feisty attitude. That's definitely a positive. It shows she has a lot of energy and she's out there having a little bit of fun on her own terms.”

Shirreffs said Zellda is not far away from her first breeze. He did not have a timeline for when she would make her first start, but added that it would likely be at the Santa Anita meet, which opens Dec. 26. With her dam being among the most popular horses ever to race in California, Zellda is already a celebrity.

“During the Breeders' Cup we had a lot of people come back to the barn and visit her and see her,” Shirreffs said. “I put Zenyatta's saddle towel on her from the Breeders' Cup and that really got people excited.”

Zenyatta has gotten off to a slow start as a broodmare. Her first foal, Cozmic One (Bernardini), started five times and did not break his maiden. Next up was Ziconic (Tapit), who started twelve times and also never made it to the winner's circle. She is currently reported to be in foal to Candy Ride (Arg).

Even though Zellda has only been galloping, Shirreffs already sees a distinct difference between her and Cozmic One and Ziconic. He trained all three for owners Jerry and Ann Moss.

“You know boys,” he said. “Sometimes they don't really care and you have to find something to interest them. Fillies, on the other hand, always want to please to a certain degree. She wants to become a race horse. Cozmic One and Ziconic, they weren't really focused that much. The difference between her and them is extreme.”

Shirreffs says that Zellda is smaller than her half-brothers, but believes that is an advantage.

“Cozmic One is a beautiful horse but he is very big and was sort of one-paced,” Shirreffs said. “He didn't have the ability to quicken and I attribute that to his size a little bit and the way he functioned. She's quick in the sense that she moves fast and reacts quickly and that might be a real positive.”

It's been more than nine years since Zenyatta last raced, and Shirreffs admits that the entire team is anxious to see one of the Hall of Fame mare's offspring produce on the racetrack.

“That's very important to us,” he said. “I know Mr. and Mrs. Moss would love to see her in the winner's circle. It's a big deal to everybody involved.”