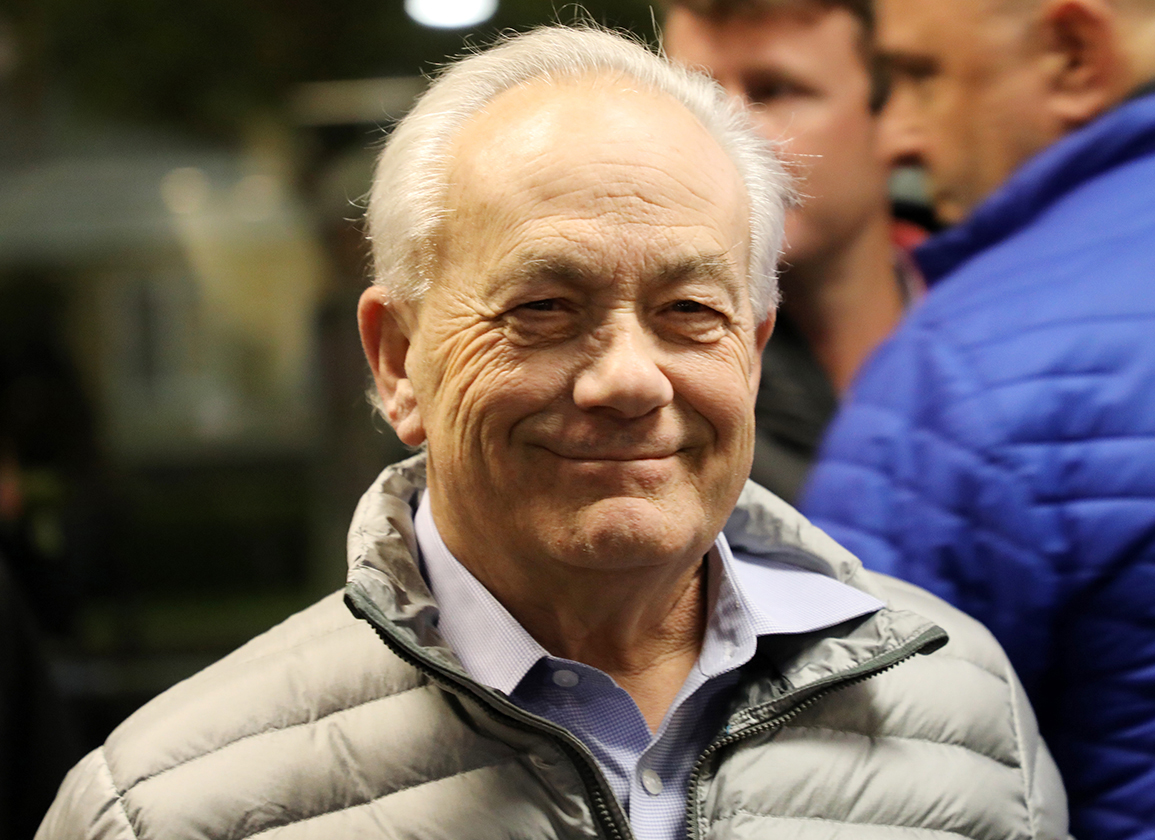 The legal threads connecting the rights of licensees to ply their trade and racetrack owners to police their grounds have been pulled tighter than a rip cord these past few years, thanks to a series of high-profile battles involving Hall of Famers Jerry Hollendorfer and Bob Baffert.

These same threads hamstrung the years-long dispute between California's trainers and racetracks about what should be written into the race-meet agreement about fair procedures for trainers facing potential banishment from a facility.

It all boils down to this: How best to balance the rights of track owners to protect their businesses from bad actors alongside the rights of trainers and others from becoming targets of arbitrary bans—actions with often huge implications for their professional futures?

As Jan. 1 looms, when the full remit of the Horseracing Integrity and Safety Act (HISA) is scheduled to go into effect—including most crucially HISA's anti-doping and medication control program—how will federal oversight of the sport alter exclusionary rights, if at all?

“HISA is finalizing its policies in this area and will have more to share in the weeks ahead,” wrote HISA spokesperson, Liz Beadle, when TDN asked to discuss the issue with a HISA representative.

So instead, the TDN reached out to three legal experts in the field. Their main takeaway? Other than a tightened regulatory world, don't expect much to alter—at least for now.

“I don't think it will really change the legal analysis,” said Bennett Liebman, Government Lawyer in Residence at Albany Law School and an adjunct professor of law.

First and foremost, “I don't think HISA preempts the common-law right of a racetrack to exclude someone for whatever reason they want absent some protective civil right,” said Alan Foreman, CEO and chairman of the Thoroughbred Horsemen's Association (THA).

This means that if a track or racing association decides that a trainer has contravened moral or ethical boundaries—irrespective of whether that same person has fallen foul of any rules and regulations—they have the authority to do so independent of HISA, Foreman said.

“HISA can regulate in areas which they're authorized to regulate, but they can't tell me who I have to allow on my property and who I don't,” Foreman said.

Such actions are rarely cut and dried, of course.

Private properties are required to afford licensees the legal framework of “fair procedure” when seeking to bar them from their grounds. For a state agency—including a quasi-state agency non-profit organization like the New York Racing Association (NYRA)—the legal standard is “due process and equal protection.”

With this in mind, racetracks try not to specify detailed reasons for excluding an individual “in almost all cases,” said Liebman.

“When they do that,” Liebman explained, “there's potential that they might damage the individual's reputation and perhaps give way to constitutional protections.”

Therefore, “the normal approach by most racetracks is to say, 'you're being excluded for our best business interests,'” said Liebman. And he doesn't expect that broad legal dynamic to change much under HISA.

There are nuances, of course.

Even if a racetrack in West Virginia or Pennsylvania excludes a licensee from its grounds, that licensee can then petition the racing commissions in those states to overturn the ban, said Foreman.

In the hypothetical scenario a racetrack in those two states excludes a licensee for a reason that falls under the remit of HISA—for a welfare and safety related issue, for example—and the licensee then tries to take their case to the requisite commission, the relevant track “is going to make the argument that HISA deprives the racing commissions of any jurisdiction over drugs and safety,” said Liebman.

“I don't think it's going to be successful,” Liebman added, about such an argument made by the tracks. “But they're going to raise it.”

Foreman is less sure. Although HISA pre-empts state law, he said, it's unclear whether HISA nullifies the right of those commissions to independently arbitrate track exclusions in their jurisdiction.

“Maybe HISA does have the right to stand in that area,” he wondered. “Maybe not.”

This leads to another hypothetical.

In the event a racetrack in other states excludes a licensee for a reason that falls under HISA's regulatory umbrella, there's a strong possibility that person will litigate the action on grounds that HISA should be the one to adjudicate the alleged offense, not the track owners.

“If I was a lawyer representing an individual, I'd argue, “HISA does have jurisdiction here, and HISA has to tell the track what to do because HISA preempts state law,'” said Foreman.

But even then, individual tracks wield enormous legal clout, Foreman added. “If I'm the track, I'd say, 'I'm not acting under state law, I'm acting under right of private property.'”

As Foreman sees it, a more streamlined regulatory environment under HISA—including more expeditious case handling times—should negate the need for tracks to weed-out so-called bad actors (more on this in a bit).

“I think the actions the tracks have been taking recently is because they thought the regulatory system was failing to address offenders, multiple offenders, or those who were giving the industry a bad name,” said Foreman.

As such, “I think it's unlikely we're going to see tracks take actions against individuals because of their records,” said Foreman.

“I think with the enactment of HISA and the implementation of HISA, that probably goes away somewhat,” he added, “unless HISA's a failure.”

But how much latitude does HISA really have in this sphere?

Earlier this year, trainer Juan Pablo Silva was handed a 180-day ban from Turf Paradise after a 1-20 shot he trained and owned was pulled up and eased shortly after the start of a race.

This past June, trainer Marcus Vitali reached an undisclosed settlement with NYRA, after the latter claimed the trainer had “engaged in conduct that is detrimental to the best interests of the sport of Thoroughbred racing or potentially injurious to the health or safety of horses or riders.”

These two trainers subsequently found a home at Mountaineer—alongside another trainer, Burton Sipp, who has faced multiple allegations involving insurance scams and dead horses, animal neglect cases at a zoo he operated, race-fixing stings and regulatory malfeasance over a 40 year period.

Interestingly, Vitali and Silva have recently saddled horses at Turf Paradise, which kick-started its latest 2022-2023 winter meet on Nov. 4.

The question raised by the professional conduct and inter-state activities of these individuals is this: Does HISA have legal sway to independently step in and exclude licensees it deems a detriment to racing's image when a racetrack fails to do so?

For many watching HISA closely, this particular question is where the rubber meets the road.

There's language in the rules that appears to give HISA fairly broad authority over conduct detrimental to the sport and to equine welfare. As Foreman explains it, however, HISA has the ability to “fine, suspend, or revoke registration” from a licensee registered with HISA, but only if that individual is found guilty of violating stipulated HISA rules, and afforded due process.

Ultimately, “If a person is suspended, that's HISA's jurisdiction. HISA is the new national racing commission,” Foreman said, before hammering home how “that has nothing to do with a track's private property rights.”

An important caveat is that every licensee begins life under HISA with a clean slate.

“Remember, everybody starts at zero when the medication rules go into effect on January 1,” said Foreman. “They're not allowed to take into account their prior record.”

And Foreman said he is hopeful that HISA's new stricter set of rules and sanctions in general will motivate better overall standards of equine care.

One salient example of how this stricter regulatory theater will look surrounds Boldenone, an anabolic steroid better known as Equipoise.

In September, trainer Nagib Aboughaida was suspended for 15-days at Gulfstream Park and fined him $500 for a Boldenone positive. Under HISA, Boldenone is a prohibited substance, a positive which necessitates a two-year suspension, a fine totaling $25,000 or 25% of the purse (whichever is greater), and an ineligibility period of up to 14 months for the horse.

Still, beyond the purview of actionable conduct, HISA's wrists are still fairly tightly tied, Foreman conceded. This of course includes there being “no mandatory reciprocity among racetracks if a racetrack chooses to exclude an individual for reasons it determines are appropriate,” Foreman added.

“That will still remain moving forward.”

That's not to say HISA doesn't have the potential authority to exclude trainers for actions or behaviors that aren't currently specific violations, said Drew Couto, an attorney who has represented trainer Jerry Hollendorfer in the many-splintered litigations stemming from his exclusion from The Stronach Group facilities in June of 2019.

The trick, Couto said, will be to devise a set of objective criteria to specifically delineate expectations of ethical equine care.

Crucially, such criteria must be relayed to trainers and others in clear, easily understandable fashion, said Couto.

“I don't think somebody should be left alone without any idea that their license is in jeopardy and all of a sudden be blind-sided,” said Couto.

In other words, “being congratulated one week in the winner's circle for your winners, and then the next week being told you've got to get out of Dodge,” Couto added.

In this regard, what HISA would have to do is similar to what the California Horse Racing Board (CHRB) attempted last year, when proposing regulations that would have penalized trainers for certain equine injuries or fatalities.

The CHRB shelved that idea in favor of a blue-ribbon panel to review equine injuries, stymied—at least for now—by the practicalities of framing sanctionable regulations around what is often such a nuanced and multi-faceted issue.

As for HISA intervening in private property matters, Couto believes that in the early days of the law, the new federal Authority will prove reluctant to weigh in on many matters where licensees have been excluded from private facilities.

Absent that clear set of standards in cases where licensees haven't broken any specific rules, “I suspect HISA's not going to want to jump into the deep end of that pool—not at the outset,” said Couto. “Their lawyers are going to say, 'do we want to be the defendants in a Jerry Hollendorfer-type of case?'”

Given the sheer scale of litigation costs as well as the enormity of the undertaking still ahead in ensuring that HISA works as intended, said Couto, “does HISA want that?”