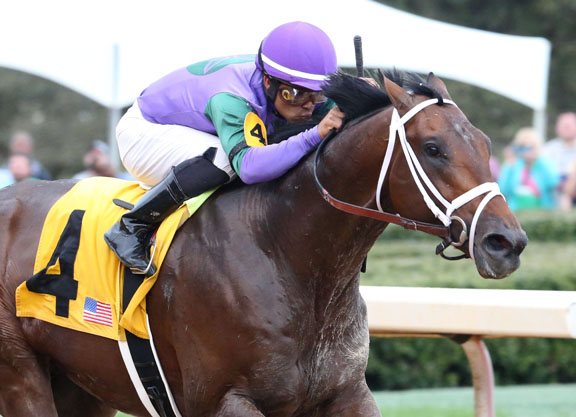 Grade I winner Magnum Moon (Malibu Moon–Dazzling Song, by Unbridled's Song) was euthanized at Cornell's Ruffian Clinic across the street from Belmont Park Friday after a year-long battle with laminitis. The bay had been under the care of the Ruffian Clinic since suffering a career-ending injury during a workout in June of last year. He was undergoing treatment for multiple fractures when he developed laminitis.

“We want to thank Dr. Piggot, Dr. Nixon and the excellent staff at the Cornell Ruffian Clinic for their superb care for Magnum Moon,” said owners Robert and Lawana Low. “He was a special colt that was obviously talented on the racetrack, but also very smart and courageous during his treatment. Magnum Moon was all class until the very end. We cherished him dearly and thank him for all the joy, great times and for the inspiration he brought to our lives.”

Bred by Ramona Bass, Magnum Moon was purchased by Jacob West on behalf of the Lows for $380,000 at Keeneland September. A debut winner at Gulfstream in January of 2018, the 'TDN Rising Star' captured a Tampa optional claimer a month later. The Todd Pletcher trainee followed suit with victories in Oaklawn's GII Rebel S. and GI Arkansas Derby last spring and suffered his lone loss in the GI Kentucky Derby. Magnum Moon's record stood at 5-4-0-0 with earnings of $1,117,800.

“It's a sad day for our entire team,” said Pletcher. “Magnum Moon showed immense talent from the very beginning at my father's training center in Ocala. He came to us with high expectations and delivered in a huge way. I'm sorry he won't get to pass on his heart and talent”