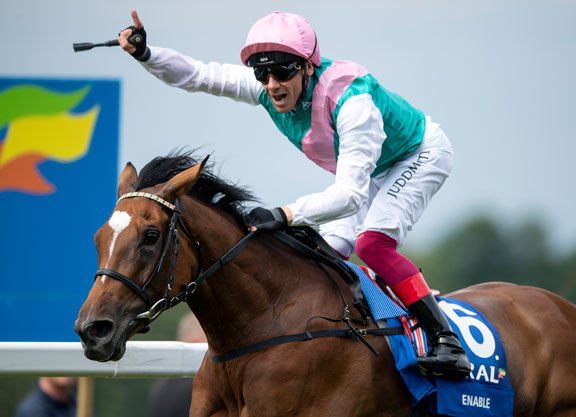 I don't speak French, but I do eavesdrop in both English and French. Wearing ear-buds, as if I am listening to Sirius SXM, makes it easy.

What I have gathered by being “on the earie” here in Paris this week is that there is a frenzy going on. Almost every overheard conversation comments about one of two things.

1. The unusually cold weather.
2. Can Enable win the Arc?

In English, from ex-patriots and tourists, it is less about the betting, more about the quest for history.

The interest in this one race, her finale, the rich Arc de Triomphe on Sunday has created what I can only label as a frenzy.

Trying to find such racing hysteria back home, the adulation of Ruffian, back in the mid 1970's is the closest I can find and feel. Oh sure Zenyatta, Lady's Secret and even Genuine Risk had fan clubs, but not the frenzy of a 5 year-old mare who has won the last 10 of her races, all in Group I company. That includes two runnings of the Arc and The Breeders' Cup Turf. Imagine that! What a record!

Ruffian was undefeated in 10 races, and she usually won by very wide margins. Many thought she was the greatest thoroughbred in history going into the ill-fated match race against Foolish Pleasure. There were over 50,000 paying spectators that afternoon at Belmont Park in July of 1975. Millions more watching on CBS then, and even now on YouTube.

The New York Racing Association stoked the rivalry by giving away buttons which simply read “HIM” or “HER.” Those little tin mementos now sell on Ebay for about $100. each. Yes, Ruffian still has her loyalists.

Sunday, the mile and a half on turf will have 12 entries, thousands of stories and a few excuses for the losers. I think Enable will indeed rewrite the history books.

Yes, Ghaiyyath has the best early speed, and with top jockey William Buick could go wire to wire. Yes, Waldgeist could give trainer Andre Fabre his 8th Arc winner. Yes, Aidan O'Brien is always dangerous, and he has Magical and Japan. And, yes, Scottsass, the now horse, did win the French Derby and could surprise.

But, they would all have to beat Enable. I don't think they will, and the uproar, the fury and yes, the frenzy will live on.