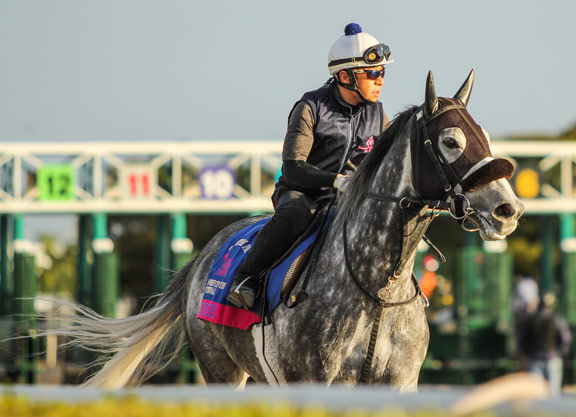 HALLANDALE BEACH, FL.–The new $7 million GI Pegasus World Cup Turf S. has attracted a diverse international array of runners and Japanese invader Aerolithe (Jpn) (Kurofune) may be one of the most intriguing of the group as a relatively unknown commodity on these shores.
A three-time group stakes winner in Japan, including the 2017 G1 NHK Mile, the 5-year-old mare has never raced outside her native land. Aerolithe’s journey took a total of 21 hours and 25 minutes, traveling from Tokyo to South Korea to Anchorage to Miami.
When asked how the mare handled the long ship and her new surroundings at Gulfstream, Kate Hunter, Pegasus World Cup field representative and translator for the Japan Racing Association, said. “Absolutely fabulous! She has never traveled this far. She has never traveled internationally, so we weren’t sure how she was going to handle it, but she was a natural.”
Owner Sunday Racing Co. and trainer Takanori Kikuzawa had originally intended to run Aerolithe in the GI Breeders’ Cup Mile Nov. 3, but travel issues derailed those plans.
“The connections had been targeting the Breeder’s Cup Mile and once [The Stronach Group] announced the fact they were going to have this [Pegasus Turf race], they were actually thinking about racing her in both,” Hunter said. “Then airplane trouble happened and they weren’t able to get her to the Breeders’ Cup, but they kept this in mind. We were able to get the airplane sorted this time.”
In her previous races in Japan, Aerolithe has run both clockwise and counter-clockwise, but her team feels counter-clockwise is her preferred direction, making her well-suited for American racing.
“She really likes to run counter-clockwise,” Hunter said. “If you look at her last race, running clockwise, she finished 12th [in the G1 Mile Championships Nov. 18], but was only three lengths behind the winner. She prefers going the other way around, so she should really fit into American racing and she has really good speed. She could probably run on the dirt if we let her.”
Aerolithe is one of just three fillies in the 10-horse field, but she has faced and defeated males before on many occasions, most recently when capturing the G2 Mainichi Okan S. in October. She also finished just a neck behind the highly regarded Mozu Ascot (Frankel {GB}) in the G1 Yasuda Kinen S. in June.
“Males are no problem,” Hunter said. “She has beat them in Group 1 races before and lost to them by heads in major races in Japan. We are not worried about her speed or her ability at all.”
Aerolithe’s trainer Takanori Kikuzawa has been aboard the striking gray in the mornings since she was released from quarantine, but jockey Florent Geroux, who piloted last year’s GI Pegasus World Cup victor Gun Runner (Candy Ride {Arg}), will take over for Saturday’s race.
“There is a guy named Nobutaka Tada in Japan, who has been working in American racing for quite a while, and he knew [Florent Geroux’s] agent, so he set it up,” Hunter said. “We were looking for someone who could ride at around 112 pounds since Aerolithe is not on Lasix and is a filly, so she gets quite the [weight] allowance.”
Given her track record in Japan, if Aerolithe travels over the Gulfstream turf course as well as she did on the main track in her half-mile breeze in :51.15 Wednesday morning, she will be a force to be reckoned with Saturday.