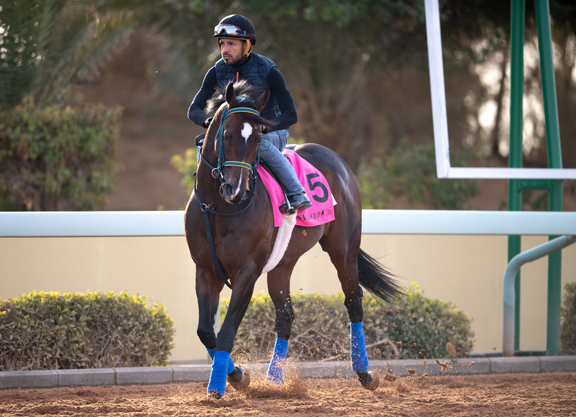 The mighty Imperial Hint (Imperialism) will begin his 7-year-old campaign facing 12 rivals in the $1.5-million Saudia Sprint over 1200 meters at King Abdulaziz Racecourse Saturday. The speedster was last seen in the Middle East finishing third in the 2019 G1 Dubai Golden Shaheen. He returned stateside to win his second renewals of both the GI Alfred G. Vanderbilt H. and GI Vosburgh S. and will be making his first start since a third-place effort in the GIII Mr. Prospector S. at Gulfstream last December.
“It's great the success Imperial Hint has brought me around the world, like coming here for the first time to Saudi Arabia,” trainer Luis Carvajal, Jr. said. “It's a big deal. That's what you're looking for, especially a small guy like me. I wish this would happen to every small trainer in horse racing.”
Gladiator King (Curlin), winner of last year's GIII Hutcheson S., is two-for-two for new owner Sheikh Rashid bin Humaid Al Nuaimi. The former American runner has already won the G3 Al Shindagha Sprint and G3 Dubawi S. at Meydan this year.
“Lately he has been very good,” trainer Satish Seemar said. “He's very unique for a sprinter because he can go to the front or sit and stalk, so I feel like I'm in a very good position with him. His fitness and blood reports are perfect and everything is going well and to plan. We will see how he handles the dirt course, though.”
New York Central (Tapit) won last year's GIII Maryland Sprint S. for WinStar Farm, China Horse Club International and SF Racing. He sold for $240,000 at last year's Keeneland November sale and makes his first start for Prince Faisal Bin Khaled and trainer Sami Alharabi Saturday.
The Saudi Cup will be televised in the U.S. live on FOX Sports 1 at Noon ET (DIRECTV ch. 219, Dish ch.150) with the undercard airing on TVG. In the UK, it will be shown on Sky Sports Racing and Racing TV.