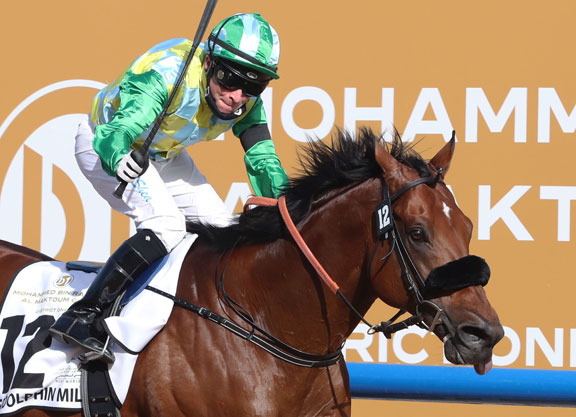 The first horse bought by Libyan owner Nasir Askar when plucked out of the 2016 Racing In Dubai Sale for AED150,000 (£29,612/€34,537) having formerly raced for Sheikh Hamdan bin Mohammed, Secret Ambition plied his trade successfully in the Meydan handicap ranks over the next two seasons, picking up three wins over seven furlongs to a mile for trainer Satish Seemar before finishing second in the G3 Burj Nahaar of 2018. He picked up his first black-type win the following season in the G3 Jebel Ali Mile and took the 2019 Listed Dubai Creek Mile before placing in the G2 Al Maktoum Challenge R2, G3 Firebreak S., G3 Burj Nahaar and the latest edition of the Dubai Creek Mile in December. Secret Ambition was second in the Jebel Ali Mile on Jan. 22 prior to a 3 3/4 front-running score in the Firebreak, and he was returning to his favoured trip on Saturday after checking in fifth when trying 2000 metres in the G1 Al Maktoum Challenge R3 on Super Saturday.

Driven to the lead by O'Shea from gate two, Secret Ambition had the Saudi-trained Urban Icon (GB) (Cityscape {GB}) and Salem bin Ghadayer's Chiefdom (The Factor) to keep him company on the outside down the backstretch while the favoured Midnight Sands (Speightstown) raced down the middle of the track in the second flight of runners. Turning into the straight, Secret Ambition promptly put away Urban Icon while Golden Goal battled away in behind, and while a wall of horses made late headway to fight out the minor placings there was only ever going to be one winner, with Secret Ambition sprinting clear to win with ease. The winning time of 1:35.36 was a swift one over the course.

“All week I've been saying that in this race there was no more experienced horse for this distance,” said Seemar. “At the post position draw, he was prominent in every race they would show him in the videos. He's the most deserving horse in this field and most experienced and it's perfect. With us they improve as they get older and this has worked out well. As planned, Tadhg did it by the book. This is what we live for here in our jobs. Nothing better than having a winner on this night.”

“It's great for [owner] Dale Brennan. Maybe just a bit quick back for Midnight Sands. We usually give them four to five weeks in between; we couldn't do that this year. He looked a little bit flat turning in. You could tell on the turn [Pat Dobbs] was after him and normally he's cantering. So I would have to guess that, it was coming back in three weeks. He did great at home and he has been fantastic but he's one of those horses you'd have to get four or five weeks in between races. We have next year hopefully.”