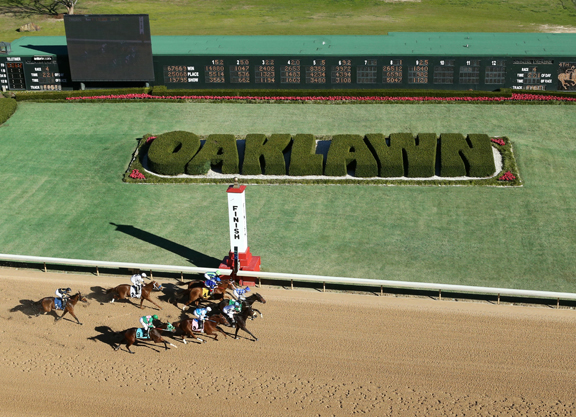 An equine neglect tip called in to Oaklawn Park’s “whistleblower hotline” has resulted in local horsemen and track management partnering to care for seven underfed Thoroughbreds found languishing in filthy stalls for at least 10 days at an off-site training facility 12 miles from the track.

The anonymous call-in has also resulted in a six-month suspension for trainer Tina Marie Nicks, whom the Oaklawn stewards found responsible for violating Arkansas Racing Commission (ARC) rule #1269, which deals with the humane treatment of horses, plus a state statute that prohibits cruelty to animals.

The circumstances and timeline of the case were detailed in Oaklawn stewards’ ruling 2019-OP-15 dated Feb. 24.

According to the ruling, Nicks had been assigned five stalls in Barn 27 at Oaklawn but also kept seven horses at an off-grounds training facility on Whited Farm Road in Hot Springs.

Oaklawn has a “whistleblower program” supported by the ARC and the Arkansas Horsemen’s Benevolent and Protective Association that is designated to receive confidential reports on any questionable activities or concerns. On Feb. 16, the hotline received the tip that Nicks’ off-site horses were underfed and had not been out of their uncleaned stalls for several days.

Retired trainer Hal Wiggins, who now serves as Oaklawn’s integrity officer, was dispatched by track management to the training center along with backstretch security manager James Ingram. The ruling states that the two documented with photographs “that the horses were lacking in proper care, were standing in unbedded stalls filled with urine and feces, and, in several cases, were showing they had been underfed.”

The ruling further states that the owner of the training center, James Lovett, “had provided hay and feed for the horses [and] Sergio Vazquez, who works for Mr. Lovett, had provided feed and care to the horses.”

Track officials subsequently purchased feed and hired Vazquez to make certain the horses received meals, water and clean bedding. But by the time the Oaklawn-purchased feed was being delivered to the training center, the ruling states, Nicks had reappeared and “was feeding her horses and stripping or cleaning the stalls.”

A stewards’ hearing was held Feb. 20. According to the ruling, “there was a 10-day period in which Ms. Nicks indicated she was sick and couldn’t care for the horses.”

In addition to the above-mentioned ARC rule and the state statute dealing with neglect, the stewards also cited ARC violations pertaining to “questionable conduct” and “the trainer’s responsibility to guard and protect all horses in the trainer’s care.”

During her suspension Nicks is not permitted on the grounds of Oaklawn or any training facility in Arkansas. The horses may not be transferred to any family member or employee of Nicks, and all horse transfers from her care must all be approved by the stewards.

According to Equibase, Nicks has been a licensed trainer since 2017 with six wins from 97 starts in Arkansas, Louisiana, Oklahoma, and Texas. She is 0-for-12 at the current Oaklawn meet.