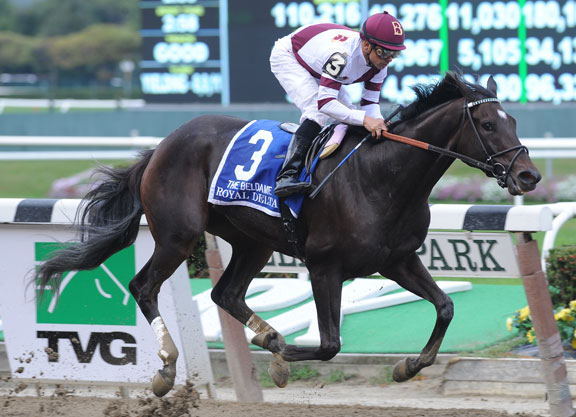 Five contemporary horses, three trainers and one jockey are the nine finalists on the ballot for induction as part of the class of 2019 for the National Museum of Racing and Hall of Fame, it was

Five contemporary horses, four of which are champion racemares, three trainers and one jockey make up the nine finalists on the ballot for induction into the class of 2019 for the National Museum of Racing and Hall of Fame, it was announced Thursday.

Mark Casse, Christophe Clement and David Whiteley are the trio of trainers eligible for induction, while Craig Perret is the lone jockey on the ballot.

Royal Delta won 12 of her 22 starts with 10 of those winner's circle visits coming in graded events, six of which were Grade Is, and earned over $4.8 million during her stellar career. Capturing the 2011 GI Alabama S. and GI Breeders' Cup Ladies Classic en route to champion 3-year-old female honors, the 'TDN Rising Star' was subsequently sold by her breeder Palides Investments for $8.5 million to Besilu Stables at that term's Keeneland November Sale. Winner of both the GII Fleur de Lis H. and GII Delaware H. in the summer of 2012, the Bill Mott pupil romped in the GI Beldame S. and repeated in Breeders' Cup Ladies Classic to secure her second Eclipse award.

Kicking off her 5-year-old season with a win in the 2013 GIII Sabin S., which has been renamed in her honor, Royal Delta repeated in the Del 'Cap, which was upgraded to a Grade I and won the GI Personal Ensign H. Fourth to another future Hall of Famer in Beholder (Henny Hughes) in that year's Breeders' Cup, she took home the hardware yet again as the season's top older mare. Royal Delta died in Ireland at just 9-years-old to due to complications from delivering her first foal in 2017. Her Galileo (Ire) filly, now named Delta's Royalty, survived and the 2-year-old is now in training Roger Varian.

Purchased by the Coolmore contingent for $1.9 million as a KEESEP yearling, Rags to Riches made just seven starts, but she made them count with five straight victories and $1,342,528 in earnings. Trained by Todd Pletcher, the chestnut reeled off victories in the GI Las Virgenes S., GI Santa Anita Oaks and GI Kentucky Oaks in 2017. Given her shot against males in the GI Belmont S., Rags to Riches did not disappoint, winning a no-holds-barred stretch battle with Hall of Famer Curlin to become the third female to capture the Test of a Champion. The blue-blooded distaffer made just one more start after that, finishing second in the GI Gazelle S., and earned that year's Eclipse for top sophomore filly.

Blind Luck captured Grade I events at the ages of two, three and four, earning over $3.2 million for trainer Jerry Hollendorefer, Mark DeDomenico LLC, John Carver and Peter Abruzzo; while Fox Hill Farms' Havre de Grace banked $2.5 million and was named the 2011 Horse of the Year. The pair began their well-documented rivalry in the 2010 GII Delaware Oaks, with Blind Luck getting the better of Havre de Grace in a photo finish. She repeated the feat one month later in the Alabama, but Havre de Grace returned the favor in the GII Cotillion S. at Philadelphia Park (now Parx Racing) in October. After Blind Luck and Havre de Grace respectively ran second and third behind Unrivaled Belle (Unbridled's Song), dam of two-time champion Unique Bella (Tapit), in the Breeders' Cup Ladies' Classic, Blind Luck was crowned champion sophomore filly of 2010.

The rivalry continued into 2011, with Havre de Grace besting Blind Luck in Oaklawn Park's GIII Azeri S. The pair would later return to Delaware Park to meet one final time, with Blind Luck hitting the wire a nose in front of Havre de Grace in the Delaware H. Havre de Grace would go on to defeat males in the GI Woodward S. in her next start, cementing her Horse of the Year honors and was named that term's champion older female. She sold to Mandy Pope for a record-breaking $10 million at the 2012 Fasig-Tipton November Sale.

Gio Ponti, a finalist for the third consecutive year, amassed 10 graded stakes victories–eight of which were Grade Is–and earnings of over $6.1 million in a career that saw him earn three championship honors for owner Castleton Lyons. His Grade I victories include the 2009 Frank E Kilroe Mile H., Woodford Reserve Manhattan H., Man o' War S. (which he also won in 2010) and Arlington Million S., and the 2010 and 2011 renewals of the Shadwell Turf Mile.

Gio Ponti's conditioner Clement, 53, joins him on the ballot this year. The Frenchman has won 1,906 races to date for earnings of over $127 million during a career that started in 1991. Clement's top trainees include Belmont winner Tonalist (Tapit), who also took two renewals of the GI Jockey Club Gold Cup and won the GI Cigar Mile, Discreet Marq (Discreet Cat), Forbidden Apple (Pleasant Colony), Ruthierenne (Pulpit), and In Summation (Put It Back) among others.

Whiteley, the son of Hall of Fame trainer Frank Whiteley, gained acclaim as the trainer of champions Waya, Revidere and Just a Game. Winning at a stunning 32.7% clip throughout his training career, the conditioner also is well known for foiling Spectacular Bid's 1979 Triple Crown attempt with Coastal in the Belmont S. Whiteley passed away in 2017 at age 73.

Lone jockey Perret, 68, won 4,415 races and earned over $113 million during a career that spanned from 1967 through 2005. His career highlights include winning the Belmont aboard Bet Twice by 14 lengths and capturing the Kentucky Derby with Unbridled.

Hall of Fame voters may select as many candidates as they believe are worthy of induction to the Hall of Fame. All candidates that receive majority approval (50.1% or higher) of the voting panel will be elected to the Hall of Fame. The former rule capping the number of inductees at four was eliminated by the Museum's Executive Committee in 2018. All the finalists were required to receive support from two-thirds of the Nominating Committee to qualify for the ballot.

Hall of Fame ballots will be mailed to the voting panel Mar. 1. The results of the voting on the contemporary candidates will be announced Apr. 22. That announcement will also include this year's selections by the Museum's Historic Review and Pillars of the Turf committees. The Hall of Fame induction ceremony will be held at the Fasig-Tipton Sales Pavilion in Saratoga Springs, N.Y., on Friday, Aug. 2 at 10:30 a.m. The ceremony will be open to the public and is free to attend.

The finalists were selected by the Hall of Fame's Nominating Committee from a total of 93 initial candidates suggested by turf journalists, thoroughbred industry participants and racing fans. To be eligible, trainers must be licensed for 25 years, while jockeys must be licensed for 20 years. Thoroughbreds are required to be retired for five calendar years before becoming eligible. All candidates must have been active within the past 25 years. The 20- and 25-year requirements for jockeys and trainers, respectively, may be waived, at the discretion of the Museum's Executive Committee. Candidates not active within the past 25 years are eligible through the Historic Review process.