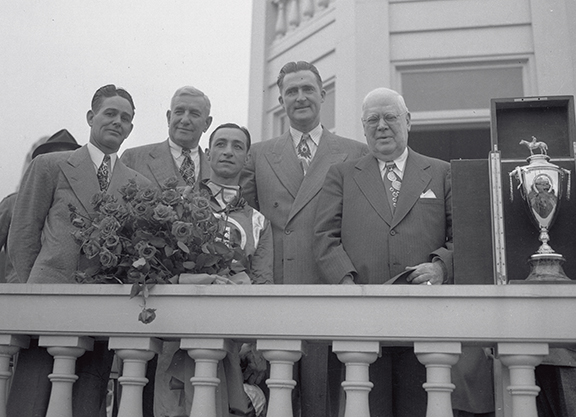 The COVID-19 virus has quarantined this week's GI Kentucky Derby, which has been rescheduled for Sept. 5. The last time America's most famous horse race got pushed off its traditional first Saturday in May calendar spot was 1945, when the nation was embroiled in World War II.

It's impossible to make accurate comparisons between a global conflict and a pandemic that are happening 75 years apart. But sifting through archived news clippings about how horse racing endured and eventually overcame that long, government-mandated shutdown reveals more similarities between then and now than you might think.

The Jan. 3, 1945 ban on horse racing was technically a “request” from the feds to help with the war effort. About two-thirds of the tracks agreed out of civic duty/pressure, and the other third came on board when they learned that ever-changing wartime restrictions now included a ban on shipping horses by rail and limited hiring of track employees who were being diverted to work in munitions factories.

A metals, rubber and fuel rationing plan prohibited most non-essential travel by car and passenger train, putting a trip to the track out of reach for many would-be racegoers. To the government, it was just as well to have tracks not running from an absenteeism standpoint, because one estimate pegged the rate of workers who didn't show up on days when races were in session at as high as 30% (a figure that by contrast sounds absurd today).

Churchill Downs was already familiar with running scaled-back wartime Derbies starting in 1942, encouraging locals to make them hometown affairs accessed by streetcar. Shortages of sugar and meat affected concessions, and the traditional aluminum and glass julep cups gave way to a composite plastic version out of respect to materials scarcities.

Then, as now, one of the first big worries once the sport shut down in January was what would be the fate of the May 5 Derby.

“As everyone knows, the 3-year-olds are the stars of every campaign,” wrote New York Times columnist Arthur Daley soon after the ban went into effect. “They alone are eligible for the major stakes–the Kentucky Derby, the Preakness, the Belmont, and all the other rich classics. For one season they command virtually the entire spotlight before advancing into the category of handicap horses where age restrictions are unlimited.”

Other reporting noted that not having horses contest big races like the Derby would eventually have a negative impact on the bloodstock marketplace.

By Jan. 14, with the industry girding for months of shutdown, initial reports of what Churchill planned to do about the Derby began to circulate.

“The plan which at this time seems to fit best into governmental regulations is one that would stage the race without any spectators (and naturally no betting) with 3-year-olds quartered at Churchill Downs furnishing the competition and the purse dependent on the caliber of the field,” the Associated Press reported.

Some 200 horses were wintering at Churchill, many of them sophomores, “although few, if any, are the type that would run in the Derby in ordinary years,” the story added.

Shipping restrictions are part of the new normal now because of COVID-19, and they were also a puzzle to be solved in wartime 1945. Some Kentucky stables that had wintered in Florida or New Orleans were planning to exploit a loophole in the no-horse-shipping mandate that allowed livestock owners to send animals via rail provided they were going back to the owner's home state. If shipped into Churchill, this would make them eligible to run in the Derby if the above plan came to fruition.

In terms of day-to-day racing, the nation's bookmakers were left with no product on which to take bets (team sports were still going on but were not as big of a gambling draw back then). Agua Caliente, Mexico City, and Havana became the only winter tracks in action in North America. But most metropolitan customers weren't familiar with those circuits, making the bookies' plight similar to what advance deposit wagering companies are going through in the age of coronavirus, hoping that horse-starved fans will still bet off-radar venues like Fonner Park and Will Rogers Downs.

“It remains to be seen whether the underground can organize under the new basis, and whether the sucker can be lured into betting bad horses,” the Times reported.

By Feb. 16, 1945, rumors were flying that New York tracks might get to reopen before Kentucky, and some Easterners began to lobby for the Derby to be run at Belmont or Jamaica. Colonel Matt Winn, the 83-year-old Churchill boss, spiked that idea by declaring the Derby would be run in Kentucky or not at all. Derby nominations were supposed to have closed on that date, but Winn told reporters the entry blanks hadn't even been mailed out yet. Nevertheless, Churchill had received 75 unsolicited nominations.

By early April, President Harry Truman made it clear there would be no early lifting of the race ban anywhere until Victory in Europe (V-E) Day was declared. So the nation recalibrated its expectations for a resumption of racing, much as we do every week now.

“The speed with which the Allies chase the Nazis into complete surrender or defeat will determine the date of the 71st Kentucky Derby,” the Associated Press reported Apr. 11.

As optimism rose based on positive war reports, plans began to crystallize. One point in general agreement among track managements was that a “soft” opening on a Monday or Tuesday was preferable to relaunching on a Saturday, when crowds would have the potential to be overwhelmingly huge.

“If he can avoid it no track president will want to open on a Saturday with a green crew, upset conditions, labor ceiling in doubt, transportation up in the air and directives flowing as fast as General Patton's tank army,” the Times reported.

V-E Day was reported as imminent on May 5, the original Derby date.

“Today was to have been Derby Day once more, but the ban on racing caused this to be just the first Saturday in May in Derbytown,” the Associated Press reported. “More than a score of 'sure starters' received brief limbering-up exercise on the muddy track. The old timers did a lot of reminiscing–and that was all.”

Other publications editorialized about the societal boost that the return of racing would provide while warning there would still be lingering effects related to the crisis.

“The immediate effect of V-E Day on sports will be principally psychological, with a feeling that much of the wartime pressure is off,” the Times wrote. “Although such problems as manpower and transportation will remain indefinitely–probably throughout the war with Japan.”

V-E Day on May 8 triggered a flood of amended meet applications at racing commissions across the country. The top official in New York vowed to grant revamped race dates as soon as possible, “in the interests of horsemen who have had a long and costly wait for the resumption of their business.”

Surprisingly, not all bookies were ecstatic.

“Word that the ban had been removed was received with mixed feelings, with Broadway bookmakers saying they would wait to see exactly what tracks began racing before they re-established their organizations,” the Times reported. “One well-known bookie in the Broadway area stated he might be hard-pressed to find 'runners,' but that he would not take back any of his former hands who are now working in war plants. 'That would be unpatriotic,' he said.”

Narragansett Park was first to open, five days after the ban was lifted. On May 21, the return of racing at Jamaica lured 42,179 New Yorkers who began queuing up 90 minutes before the admissions gates opened. They sent their money in on overly large fields, but also bought $127,000 in war bonds to help the fighting that continued in the Pacific.

Daley, the Times columnist, wrote that the appetite of a true “hoss player” never needs to be whetted. “It's insatiable. Even if they had men with machine guns at the mutuels to drive away the customers, some hard-boiled gent would probably offer to bet his neighbor as to just which one of them would be shot first.”

The Kentucky Derby ended up going off June 9 at Churchill, when Hoop Jr. wired the field in the mud before 65,000 fans.

“This wasn't the first Saturday in May, but it was the same old Derby Day,” the Associated Press reported. “It had all the color, all the pretty women, all the second guessers and all the crowd with its hustle and bustle of past Derby Days.”

Right now, the prospect of a Derby being run when the world is safer is something we can all look forward to, even if the new Labor Day weekend date doesn't dovetail with tradition. So go ahead and get teary-eyed singing “My Old Kentucky Home” this Saturday for sentimentality's sake. But for good measure, be sure to belt out a few choruses of “See You in September” too.