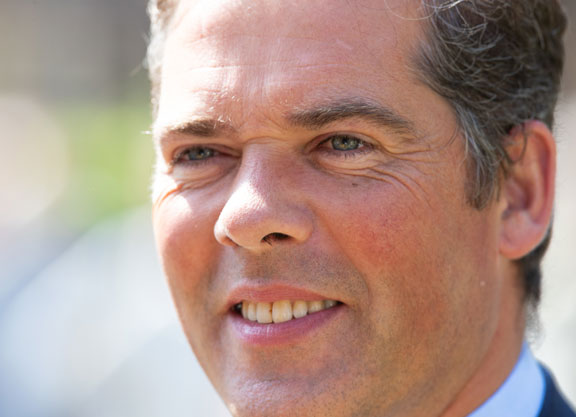 Christophe Ferland, who is based at La Teste de Buch near Bordeaux in the South-West of France, was one of a clutch of trainers to hit the ground running before the pandemic-enforced halt to proceedings in March. His 17 victories and 33 places from just 74 runners during the prologue is an impressive strike rate and good enough, as things stand, for fifth position in the French trainers' championship.

“It was an excellent start to the year; we had 17 winners and 33 horses placed, which is a great [strike] rate,” Ferland said. “We had the horses in fantastic form and it looked like I had a little edge over some of my colleagues at that stage. It's slightly frustrating to have been stopped in the way we were, but now the cards are redistributed and we start all over again.”

“Waltham was definitely impressive and I can guarantee you that he is a very, very good horse,” insisted Ferland. “I wish his new owner the best of luck with him and I am sure that he has bought the right horse. There are some offers which can't be refused and the present sanitary crisis was very influential in our decision. At the time, we had no indication when the Classics were to be run or what would or would not be. It was a tough decision, but one that made economic sense for his owners [Marie-Therese Dubuc-Grassa and M Horse Racing].”

The show must go on and Ferland gave mention of possible ready made replacements in the yard to fill the void vacated by Waltham. “Pao Alto (Fr) (Intello {Ger}) is a nice colt and the winner of two out of his three career starts last season, including a very easy victory in the Listed Grand Criterium de Bordeaux,” he said. “Castle (Ire) (Frankel {GB}), out of Group 1 winner Plumania (GB) (Anabaa), won his only start [over 10 furlongs at Pau] as a juvenile. He will stay and I have him entered in the [July 5] G1 Prix du Jockey Club and [Sept. 13] G1 Juddmonte Grand Prix de Paris.

“Frohsim (Fr) (Dabirsim {Fr}) is now the winner of three of his four career starts; he is improving all the time and was two-for-two before we came to a stop this season. I also train a nice filly who could very well turn out to be a good propsect. Her name is Euclidia (Fr) (Maxios {GB}) and she won very nicely on debut [at Toulouse] in early March. She will stay up to a mile-and-a-half.”

Home base remains on guard and is prepared for when racing eventually restarts in France, as Ferland explained, “All is pretty much normal and business-as-usual as far as training of the horses is concerned. It's been a few weeks and all the sanitary measures are now part of our daily routine. Maybe it will teach us to implement better practices in the future when another virus will inevitably hit the horses. Unfortunately, it happens and what we are experiencing now will stand us in good stead. I have had no problems with the staff and they are all working, except one girl who is married and has to stay at home to take care of her child.”

Departures notwithstanding, the trainer hasn't been as inconvenienced as others by events in recent weeks and continued, “Everything has been perfect in that regard, especially the training centre at La Teste which is extremely well maintained. All riders are careful and follow the safety guidelines. Trainers are as helpful as they can be, maintaining [social] distancing and ensuring all mandatory measures are perfectly observed. Like many of my colleagues, I had high hopes that racing would resume at the end of the lockdown period on Apr. 15. Therefore, I kept my horses under pressure and most of them were ready to go again by that time. They canter every day and I used to give them a little work, in pairs, once a week to keep them fit. We all understand the lockdown period had to be extended and health is the priority. Obviously, things changed so I slowed down a bit on the training with no more fast work at this stage.”

However, a revision of those plans will be quickly implemented should ongoing discussions at the top produce a positive outcome. “I haven't mapped out any contingency plans as we don't know exactly where things are headed at this stage. We hope to resume on May 11 or 12, but nothing is certain. I am a member of the technical committee for racing at France Galop and we had worked on a program starting on May 4. It will be delayed, by at least a week and ideally no more. That is what all professionals hope for, but making plans is not easy. When you listen to what is said about economic activities and the end of the lockdown, it is sometimes suggested that it will first happen locally. As a provincial trainer, it would be hard for me and my colleagues if we are not allowed to travel with our horses to race outside of our region.”