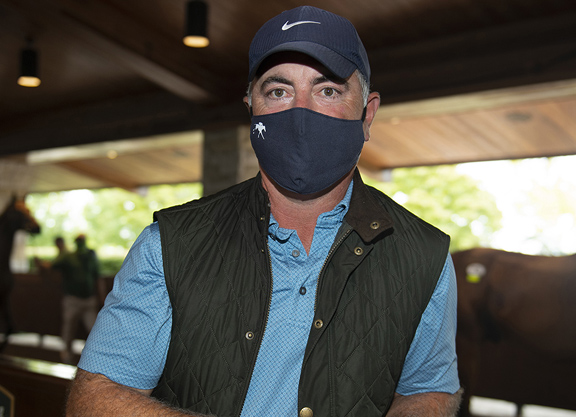 Bred in Kentucky by Dan and Valencia Leach and consigned by Lisa McGreevy's Abbie Road Farm, Agent II, session-topping hip 632 is out of the winning mare Bosserette (Street Boss), who was herself a $155,000 OBSAPR grad in 2013. Bosserette is half to SW Meditations (Out of Place) and a full to MSP Butch Walker and from the family of graded winners Lindon Lime and Regal Thunder.

Besecker Goes Back to the Well…
While Pennsylvania-based owner Joseph Besecker had dispersed much of his stock last year, he has remained involved in the sport on a smaller scale, and went to $62,000 Wednesday to reacquire an Exaggerator filly (hip 615) who he had co-bred and sold as a weanling. The dark bay was purchased by consignor Sandi Dorr's Sennebec South Farm for $37,000 the 2019 Keeneland November sale.

“She was part of my dispersal,” Besecker confirmed of the Pennsylvania-bred, who was a foal share with the Exaggerator Syndicate. “[Dorr] did a phenomenal job with the horse. We have the Uncle Lino [2-year-old half-sister named Bazinga Babe] ready to race, who we're very high on; and we have the Hoppertunity [foal colt] who looks like one of the nicest-looking babies I've seen in a long time… There were five live people on this horse–I didn't bid until late. She went for more than I would have thought, but knowing what we know [I thought she was worth it].”

Besecker said Bazinga Babe is in training with Tim Kreiser at Penn National, and noted that he and Kreiser won with a firster on Wednesday at Parx who has been less impressive in the mornings than hip 615's half-sister. An Exaggerator filly herself, Expurgated–a $40,000 OBSAPR acquisition–aired by 8 1/4 lengths in a $25,000 maiden claimer.

“I was at many, many, many more horses [before the dispersal],” Besecker said when asked of his decision to continue owning horses after seeming like he was getting out of the business. “All the reasons I said I got out were the reasons I got out, and I'm still frustrated with some things–especially during COVID. But, now, I'm applying a new business concept.”

Besecker noted that of the six 2-year-old in training purchases he made this spring, three have won, two have finished second and one has finished third.