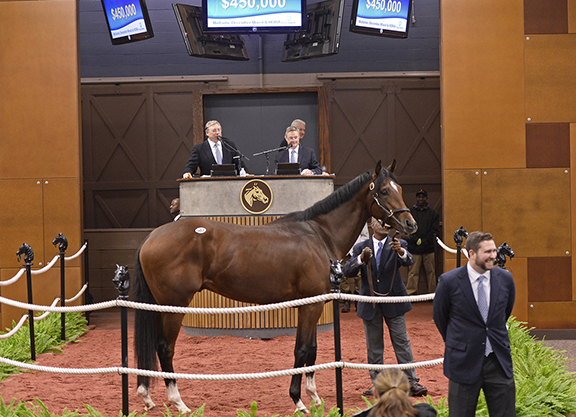 The dispersal of prominent owner Joseph Besecker's Thoroughbred holdings figured to be the driving force of Tuesday's Fasig-Tipton Midlantic December Mixed and Horses of Racing Age Sale, and Besecker-owned offerings dominated the market, producing the day's top three lots and 10 of the top 12.

Topping the one-day sale was Laddie Liam (Golden Lad) (hip 302), the 4 1/2-length winner of the Maryland Juvenile Futurity S. going seven furlongs Saturday at Laurel. The Northview Stallion Station-consigned colt brought a winning bid of $450,000 from the Green family's DJ Stable LLC. A $14,500 yearling purchase at this same auction 12 months ago, the bay broke his maiden at Laurel second out Sept. 20 for conditioner Hugh McMahon. He was third in the Maryland Million Nursery S. Oct. 19, and added an open first-level allowance going a mile Nov. 14 before running away with the Maryland Juvenile Futurity and earning a career-best 82 Beyer Speed Figure.

“He was a standout,” said DJ's Jon Green. “We've gone to lots of sales, yearling and 2-year-old sales, trying to find a horse of this caliber. You try to find a horse who's eventually going to be a two-turn Saturday horse, and he's already there. He's proven he can win stakes, he's proven he can handle different distances, and he looks like he's got the frame and running style to be able to go the extra furlong or two where the big money really is.”

Green said the Heft S. back at Laurel Dec. 28 or the Jerome S. at Aqueduct Jan. 4 were among possible next targets for Laddie Liam.

Mine Not Mine (Golden Lad), fourth behind Laddie Liam Saturday, sold a few hips later for $210,000 to Charles Zacney of Cash is King LLC. He was also offered by Northview on behalf of Besecker as hip 310. A $72,000 pick-up at the Fasig-Tipton Midlantic Fall Yearling Sale last October, Mine Not Mine is out of GSW Belterra (Unbridled), making him a half to the dam of Cash is King's 2016 GI Kentucky Oaks heroine Cathryn Sophia (Street Boss).

The first horse through the ring was part of the Besecker dispersal, and got things off to a strong start. Also consigned by Northview, which handled the majority of the Besecker sellers, Altar Issues (Broken Vow) (hip 1) brought $105,000 from Three Diamonds Farm while in foal to Practical Joke. That remained the top price paid for any broodmare or broodmare prospect Tuesday.

Having produced her first foal, a Not This Time filly, Mar. 26, the 4-year-old is a half to this year's GIII Fantasy S. and GIII Honeybee S. runner-up Motion Emotion (Take Charge Indy), who took the Zia Park Oaks last month. She also hails from the female family of 'TDN Rising Star' Sharing (Speightstown), winner of the 2019 GI Breeders' Cup Juvenile Fillies Turf.

“Blew it out of the water,” Jeff Matty, Jr., Besecker's racing manager, said when asked how the day's results compared to expectations. “We couldn't have done it without the help of Fasig-Tipton–Boyd Browning, Paget Bennett, their whole entire staff. They were tremendous throughout the whole process. We also couldn't do it, for sure, without Northview Stallion's David Wade and Paul O'Loughlin. They were instrumental in all of this. It's not an easy feat by any means.”

As for the sale topper, Matty said, “We knew throughout the week that he was getting more interest. When he won the stakes, the phone started ringing from California and Kentucky and other bigger markets. We had him in that range–I wouldn't say we were completely shocked by the price, because he's such a good physical and off of his performance the other day. He wanted no part of seven furlongs. Hugh McMahon did a tremendous training job putting some speed into him and gearing him up for that specific race. But, that horse wants two turns all day long.”

Besecker is founder, president and CEO of both Emerald Asset Management and the Emerald Foundation. The father of four admitted Tuesday evening that it was bittersweet to disband his stable, and that he was too emotional to attend the sale and/or follow it for much of the day.

“I think it's a real testament to the team that I have,” he said of the dispersal results. “I've talked about the process and the people and performance. I think our process was strong; I think my people, Jeff Matty and Paul O'Loughlin being the main two, were unbelievably strong. Those two, plus my trainers, and the sales company, which did a phenomenal job, it verifies what I've been saying. If you develop a process and stay with it and you have the right people, you're going to get performance. I think we had significant performance today.”

The day's top weanling was a $60,000 Runhappy colt (hip 151) purchased by Jeff Runco, agent for David Raim, and consigned by Takaro Farm. The West Virginia-bred June 7 foal is a half to stakes winners Ullapool (Langfuhr) and John Barleycorn (Spring At Last).

The priciest yearling was hip 221, a $57,000 filly by Jump Start offered by Crane Thoroughbred Services on behalf of Besecker. The Pennsylvania-bred was signed for by Mo Thoroughbreds.

“It was a great day in Timonium,” said Paget Bennett, Fasig's Midlantic Sales Director. “The place was full for the racehorses. Obviously, there was a lot of interest in the dispersal, and people really battled it out to try and get some of them… I think it exceeded expectations.”